Central Bankers Are Gaslighting Us About The “Strong Dollar”

Authored by Ryan McMaken via The Mises Institute,

On February 8, the Japanese yen fell to a 24-year low against the dollar, dropping to 143 yen per dollar. Not much has changed since then with the yen hovering between 142 and 144 per dollar. In September of 2021, one only needed 109 yen to buy a dollar.

Overall, the yen has dropped 21 percent against the dollar over the past year, yet Japan’s central bank apparently has no plans to change course. Nor should we expect it to do so.  Japan’s debt load has become so immense that any attempt to raise interest rates or otherwise tighten monetary conditions would prove extraordinarily painful.  So, it’s no surprise the BOJ is now positioned to become the world’s last central bank clinging to negative interest rates. 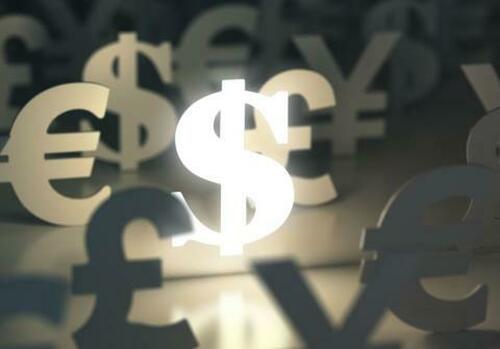 The yen is sliding the most among the world’s major currencies, but it’s not alone. Over the past year, the euro has fallen 14 percent against the dollar while the pound has fallen 13 percent. Even the Chinese yuan, which is subject to even more currency manipulation than the West’s central banks, has fallen against the dollar.

All of this means is we’re hearing a lot about the supposedly “strong dollar,” but not in a good way. Rather, the reputedly strong dollar is being discussed in a context of how harmful it is, and how we must explore ways to make the dollar weaker as soon as politically feasible.

Such talk must be heartily opposed, of course, as the dollar is not “too strong,” Rather, talk of the dollar’s “strength” is not really about the dollar at all. It’s about the weakness of other currencies and it’s about how other central banks have embraced monetary policy that’s even worse than that of the US’s Fed. If, say, other national governments and central banks are concerned about the dollar being too strong, those institutions are welcome to embrace policies that will strengthen their own currencies.

Instead, we’ll hear about how the Fed must “do something” to weaken the dollar through more easy money and thus stick it to Americans who hold dollars by lessening their purchasing power.

“We Didn’t Inflate Currency X Too Much, it’s All the Dollar’s Fault”

A perfect example of how this rhetoric works comes from the Bank of Japan’s Governor Haruhiko Kuroda in July. As the yen was really starting to slide against the dollar, he opined that “This is not so much a yen weakness as a dollar strength.” Kuroda said these words after years of negative rates, and right after the BOJ had doubled down on buying up “vast quantities of bonds” to force down interest rates and borrowing costs. Kuroda’s words also came weeks after the Swiss National Bank raised interest rates for the first time in 15 years. That was just one more example of how dovish the ECB was compared to other banks, and yet, Kuroda then manages to say with a straight face that this is all about the dollar.

This is the sort of talk we should learn to expect on the “strong dollar.” The central banks who are devaluing their currency, aren’t to blame, you see. It’s the dollar’s fault.

Other critiques of the strong are less explicit on this last point and are more just in the business of priming the pump to convince us all that a relatively less-weak dollar is a bad thing.

Blaming a “Strong” Dollar Rather than Weak, Inflated Currencies

Consider a CNN article from earlier this month titled “America’s strong dollar is hurting everyone else.” The article makes many correct factual statements. It notes that when the dollar is relatively less weak, countries with even weaker currencies will have greater trouble paying back debt denominated in dollars. There’s a whole lot of debt in the world denominated in dollars, including sovereign debt. The article also correctly notes that weaker currencies will have problems importing goods and services when payments must be made in stronger currencies. Think of the situation in Sri Lanka or Pakistan. Moreover, when a less-weak dollar is due to relatively high interest rates in the dollar zone (as is currently the case) this can mean capital flight from countries with weaker currencies: investors want dollars to invest in relatively higher-interest US securities. That’s all true, and it’s all bad news for these countries whose currencies make the dollar look good by comparison. But note how the framing is all about placing the blame for these problems on a “strong dollar” rather than on the weakness of other currencies.

As a final example, consider Friday’s article at CNBC about how a “strong dollar hurts investors.” Specifically, “A strong dollar crimps income that companies earn abroad, since money brought in in the form of weaker foreign currencies is converted into fewer dollars.” Again, this is technically true, but framing this as a “strong dollar” problem is an odd way of going about it. The real problem here isn’t that the dollar is too strong. The problem is that the investors didn’t properly anticipate the true risks involved in in investing in these other countries where central banks are at least as irresponsible as the American central bank.

In all these cases, the problem is never that the dollar is “too strong.” The problem is that other central banks are even worse, and that depreciation of other currencies are causing instability, lost wealth, and economic crises.

The fact that American central bankers—forced by populist pressure mounting over CPI price inflation in the US—have slightly reined in monetary inflation in the US is hardly a reason to beat our breasts over the supposedly Herculean strength of the US dollar. Rather, we should be focusing on “the weak euro,” “the wimpy yen,” and the “tragic Sri Lankan rupee.” Nonetheless, central bankers and their media allies are trying to gaslight us into thinking the problem is the dollar’s strength. American central bankers are guilty of much, but it’s not their fault that central bankers elsewhere are so often even more capricious.

If it all stopped there, then we might be able to just write it all off as a missed opportunity to learn the lessons of weak currency. But unfortunately, talk about a weak dollar often leads to political shenanigans. After Fed Chairman Paul Volcker substantially raised interest rates in the US in the early 1980s, the dollar became much stronger compared to foreign currencies. The alleged problems of a strong dollar soon became a popular topic among politicians, both foreign and domestic. French, German, Japanese, and British politicians then began lobbying the US government to devalue the dollar for the benefit of foreign currency.  Three years later, US government politicians caved to pressure, spurred by half-baked economic orthodoxy about the alleged value of a weak currency.

American policymakers thus embraced the Plaza Accord in 1985 and the US dollar began to lose value and purchasing power soon thereafter. This, of course, came at the expense of American savers and consumers. The inflationists won, and a new generation learned that talk of a “strong dollar” is often quickly followed by calls for devaluation. It is unlikely to be any different this time.