China’s first Mars mission appears to have been a success. On Wednesday, the China National Space Administration (CNSA) announced the Tianwen-1 probe completed all planned scientific exploration tasks, including snapping imagery data of the entire planet.

The mission’s scientific objectives were completed by a robotic spacecraft consisting of six devices: an orbiter, two deployable cameras, a lander, a remote camera, and the Zhurong rover. The aims of the mission included:

CNSA said the Tianwen-1 had spent two years orbiting Mars while the rover portion of the mission surveyed the surface for about a year. One thousand forty gigabytes of “medium-resolution” and “high-resolution” image data covering the entire world of Mars were acquired.

“As of June 29, the Tianwen-1 mission orbiter has been flying normally for 706 days, orbiting Mars 1,344 times, and has acquired medium-sized data covering the entire planet of Mars. With high-resolution image data, all scientific payloads have achieved global exploration of Mars. The “Zhurong” rover has traveled 1921.5 meters on the surface of Mars. Both the Tianwen-1 mission orbiter and the Mars rover have completed the established scientific exploration​​​,” CNSA said. 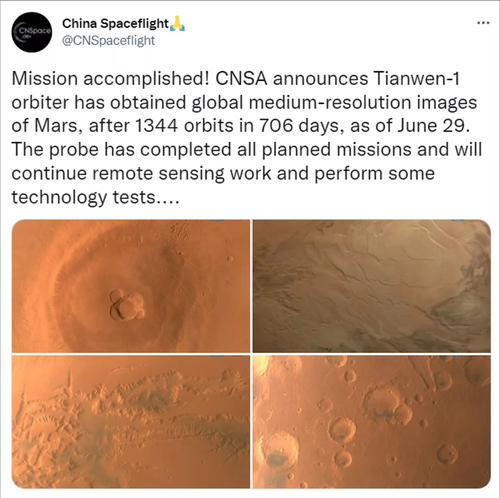 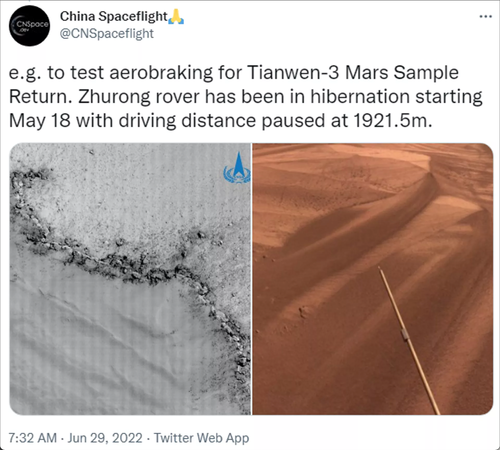 Some of the photographs released show where the planet’s water resources reside. In a 2018 European Space Agency mission to the planet, an orbiting probe found liquid water under the ice of the planet’s surface.

Here are the most important developments since the Chinese probe started orbiting Mars in early 2021 and began operations in May 2021:

CNSA said the scientific data collected would be researched and used to promote humankind’s exploration of the universe.

The final frontier is space — the world’s superpowers are on a hunt for trillion-dollar deposits of rare metals that will power Earth’s green energy revolution in decades to come.