While we wait for China’s economic data dump due Monday, when industrial production and retail sales are expected to crater to deep negative territory as a result of the ongoing covid lockdowns, this morning we got a harsh reminder just how hard the world’s 2nd biggest economy has been hit when Beijing reported that April total social financing and RMB loans came in much below market expectations, even as M2 growth accelerated and was above market expectations on the back of the RRR cut and more expansionary fiscal policy stance.

Here are the details: 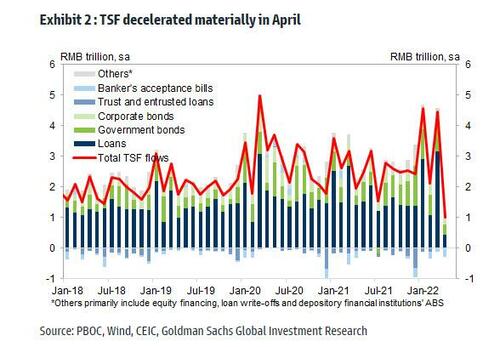 Among major TSF components, shadow banking credit continued to contract in April at a much faster pace compared with March. Trust, entrusted loans and undiscounted bankers’ acceptance bills fell RMB275bn in April, vs the RMB113bn contraction in March. Based on loans to different sectors, weakness in loan growth was broad-based, with the only exception being bill financing. Corporate mid-to-long term loan growth was 6% vs 22.5% mom annualized in March. Corporate bill financing rose strongly by 102.4% mom annualized from 97.3% in March. On loans to households, total household loans declined by 1.7% month-over-month annualized, vs an expansion of 6.6% in March. PBOC changed their categorization of household loans and now focuses on usage of loans (housing related vs consumption related, for example), rather than by maturity. April data are thus not strictly comparable with March data. However, on a net basis, new mortgages were -61bn RMB in April, in comparison with household new medium to long term loans (which are mostly mortgages) of 492bn RMB in April 2021, or +374bn RMB in March 2022 (NSA basis). Government and corporate bond issuance also slowed in April.

According to Goldman, “the composition of RMB loans suggests corporate loan growth decelerated and household loans stock declined in April”, which is painfully obvious of course. The question is why, and according to the PBOC, credit demand tumbled due to the Covid resurgence which was cited as one main reason behind the weak RMB loans and TSF data. Medium to long term loan growth was still much slower than short term loans (such as bill financing) growth, and loans to the real economy was also much lower than overall RMB new loans (which include lending between financial institutions). “These all implied very weak credit demand despite monetary policy easing”, according to Goldman.

What does China’s collapsing credit data means? Well, as Bloomberg’s Simon White writes, liquidity and lending data in China looks to be forming a trough, which points to a bottom in growth and stocks. However, there are two important caveats:

Echoing what we wrote above, White writes that on the surface, April lending data for China released today looked dismal, showing a Covid-driven slump for aggregate financing and new CNY loans, “but monthly numbers are noisy and impacted by seasonal effects. Looking at the 1-year aggregate sum’s change over the last year gives a more stable picture, and on this basis new CNY loans look to be bottoming.“ 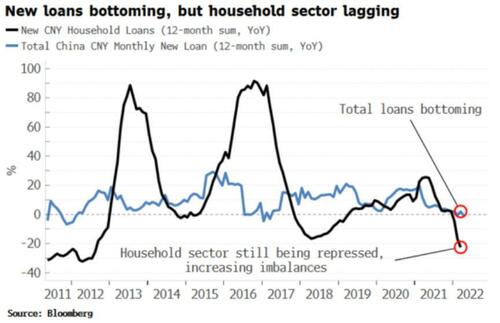 Meanwhile, today’s announcement that China will build more Covid hospitals and increased testing suggests they are making the first steps towards “endemicity”, or living with Covid according to White. Moreover, the PBoC has recently introduced new relending programs and further loosened restrictions to aid beleaguered property developers. Lending going forward should thus begin to pick up steam, which points to growth soon turning up. 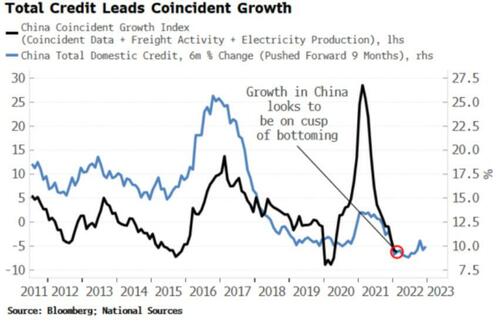 Still, the total figures mask the sharp decline in lending to the household sector, in a sign imbalances are worsening again. As the Bloomberg strategist explains, a key feature of China’s economy has been to repress the household sector to the benefit of the export-orientated corporate sector. The household sector is a net importer so inhibiting its demand widens the trade surplus. Further household repression has resulted in even larger trade surpluses through the pandemic, which China must foist upon the rest of the world.

Of course, the flipside of trade surpluses is capital outflow, and capital outflow from China has been depressing domestic credit (it will also soon prove a major tailwind to bitcoin once Chinese households with $35 trillion in deposits realize more devaluation is coming and scramble to park their capital offshore using the only possible mechanism available). Rising trade surpluses and falling FX reserves (some of which is due to the rising dollar and rising US yields) betray increasing capital leakage. In an economy with a managed exchange rate and capital controls, capital outflow leads to a destruction of domestic credit. 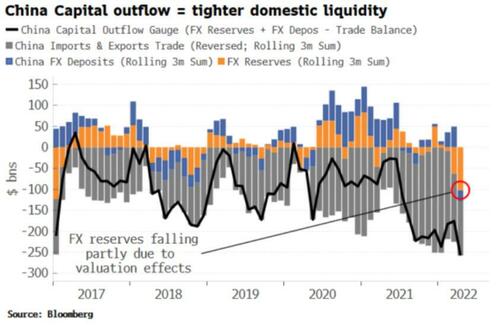 This is why the yuan has been allowed to weaken, as it lessens the fall in domestic credit from capital outflow. However, as White warns, it also adds to imbalances, and globally it requires a greater trade deficit in the US. These are bad for China’s and the US’s growth in the medium term.

Bottom line: growth in China should soon bottom, but rise at a slower pace than before. Nevertheless, all bets are off if food prices drive an acceleration in China’s CPI – the way they did in 2011 – risking a wage-price spiral, a significantly weaker yuan, and a rise in global trade protectionism.