As Deutsche Bank’s FX strategist George Saravelos writes in a recent research report he has been “on the pessimistic side of the reflation narrative for some time now.”

In the note titled “three charts for pessimists”, he admits that there are many more things happening to the global economy than easy fiscal and monetary policy, including a large negative supply-shock, in turn leading to sizeable demand destruction; stronger than expected precautionary saving behavior from consumers pushing down r*; and massive structural economic change on the back of COVID-led digitization across multiple sectors. And now we have to add China to the mix.

His first chart below highlights a simple observation: China has been acting as a massive global growth turbocharge since the start of the century, and is responsible for more than a third of world GDP growth. As Saravelos gloomily notes, “systemic risks of the unfolding property developer crisis aside, if the last few months experience are signaling a regime break in Chinese tolerance for what authorities have termed “low quality” growth, the world should take notice.” 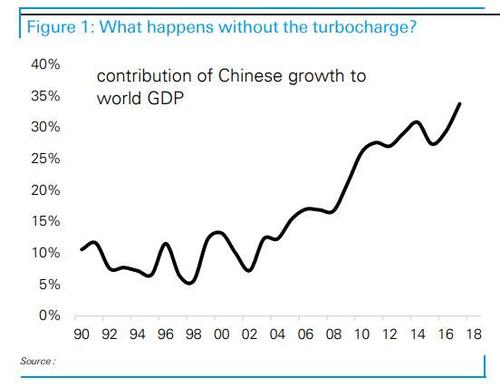 Back to the developed world, Saravelos’ second chart shows there is still a massive hole in the UK labor market. Total hours worked are a whopping near-10% below trend compared to pre-COVID. Yet the market is now fully pricing a Bank of England rate hike early next year. For sure, wages are rising, but as a recent IFS study showed there are still massive disruptions in the UK labor market. It will take a brave central bank to hike in to such a hole. Even if it does, it is hardly positive for the currency. 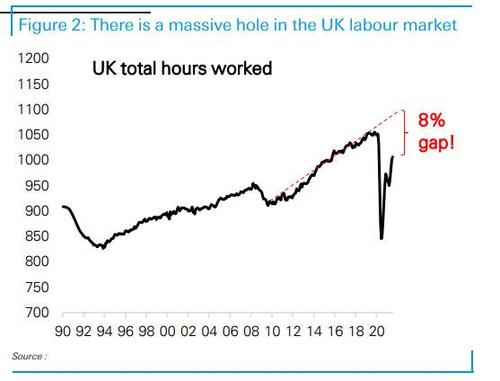 Finally, there are two parallel universes. The global goods sector is overheated. Look no further than US consumption, which is half a trillion dollars above trend. But the US services sector is twice as large and half a trillion below trend. The analytical value of aggregate GDP metrics is severely lessened in the presence of such massive sectoral dislocations. In recent months, the goods sector has started decelerating faster than the services sector has quickened. How the consumer rebalances spending in coming months will be very important. 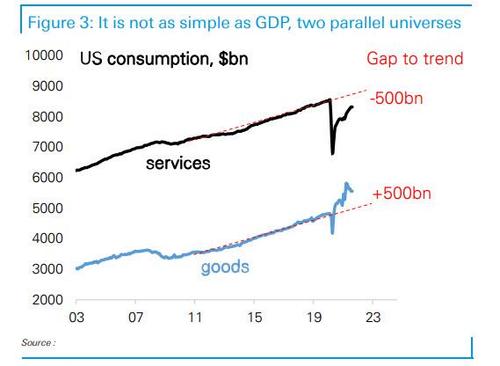 We are only at the very beginning of trying to understand the true post-COVID steady state, it will be a long ride.