Update 10:00pm ET: moments after reporting a red hot PPI which was the highest since Lehman, China effectively launched price controls, with China’s economic planning agency vowing to increase supply of key consumer goods to stabilize prices, according to a statement on NDRC website on a national video meeting Tuesday.

From the NDRC statement:

Production, distribution, consumption and other links, give full play to the role of government, market, society, etc., use economic, legal, administrative and other means to improve the ability and level of price control, and effectively guarantee the effective supply of important livelihood commodities and the overall stability of prices.

The meeting also analyzed the current and future price situation, made comprehensive arrangements for this year’s work to ensure the supply and price stabilization of important livelihood commodities, combined with the improvement of the price control mechanism of important livelihood commodities, and focused on key points such as corn, wheat, edible oil, pork, and vegetables. Promote the effective connection of production, supply, storage, and sales. At the same time, we will actively do a good job in the regulation of the bulk commodity market, strengthen market supervision, and make every effort to ensure sufficient supply of important people’s livelihood commodities and basically stable prices.

And now that China is officially setting prices, expect black markets for everything which the government is micromanaging to emerge and lead shortages that will make the current batch of supply-chain bottlenecks look like a walk in the park.

As noted in the preview of today’s potentially “shocking” China inflation data, moments ago Beijing reported that while CPI came in just softer than expected at 1.3% Y/Y, below the 1.6% consensus, or PPI – or factory-gate inflation – came in at a scorching 9.0% as a result of surging commodity prices. That number was higher than the consensus estimate of 8.5% and was the highest since September 2008, just around the time Lehman collapsed. Also of note, the spread between the CPI and PPI growth rates, a metric highlighted earlier today in Gundlach’s Doubleline call, rose further and hit the highest level since 1993. 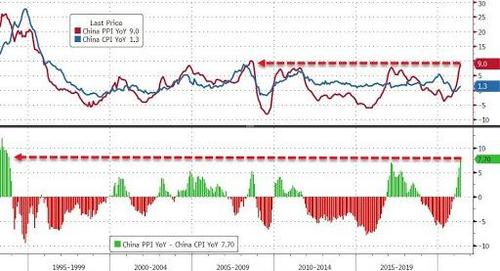 Looking at the CPI side, the number came in less than expected thanks to a mute core component which rose just 0.90%, while the food inflation tracker rose a modest 1.65%, a far cry from the soaring, double-digit food inflation from one year ago when sky high pork prices nuked the food basket.

… and since CPI remains dormant, it is clear that Chinese factories are still absorbing rising costs rather than passing them on, which means it is only a matter of time before industrial profits plummet.

From China’s perspective, as long as CPI remains subdued, there is no crisis. As for soaring PPIs, as noted earlier, the prevailing view is that such sharp gains in producer prices are a short-term phenomenon driven by the restarting of economies and supply constraints, although increasingly more analysts are issuing loud warnings that higher prices may become more sustained.

It is the concern that the PBOC will sooner or later have to intervene and contain imported inflation by tightening conditions further (and/or hiking rates), that has depressed local markets, and has sent the Hang Seng China Enterprises Index falling for five straight days, the longest losing streak since September. In June, the gauge is among the worst performing global benchmarks, along with the CSI 300 Index of mainland-listed firms. Meanwhile, the government bond market also starting to lose altitude, with the yield on the benchmark 10-year note increasing the most in six months on Friday.

And while we don’t expect any activity from the PBOC for the near future, the big question is how can Chinese companies pretend all is well, before the surge in commodity prices which is not passed on to consumers (courtesy of repeated taps on the shoulder from Beijing) sends profit margins plunging and sparks yet another Chinese crash. 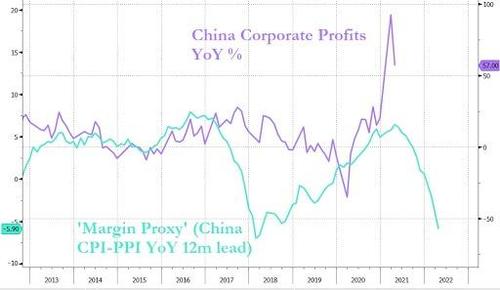 China is about to unveil closely-watched inflation data, and, as in much of the world, policy makers will be hoping accelerating prices are transitory.

Figures due 9:30 a.m. local time will show China’s producer-price index rose to 8.5% in May, according to a Bloomberg survey of economists, the highest reading since Lehman Brothers collapsed in September 2008.

Economists are sanguine about the risks right now. Chinese factories are still absorbing rising costs rather than passing them on. The result is the consumer price index probably only rose to 1.6%, the survey shows.

That’s good news for a central bank that, according to ANZ Banking, lacks tools to deal with such supply-side price pressures. Globally, the prevailing view is that such sharp gains in producer prices is a short-term phenomenon driven by the restarting of economies and supply constraints, although warnings are growing that higher prices may become more sustained.

Beijing is dealing with a number of fronts at once as a result of pandemic-era stimulus. Much of the money pumped by central banks around the world is making its way into China’s borders, complicating Beijing’s efforts to put a lid on prices without abandoning market reforms. This has led to a tricky balance of using strong rhetoric and market expectation management instead of blunt intervention when it comes to tackling overheating in the yuan, crypto, housing and raw materials.

Wariness is creeping into the nation’s financial markets. The Hang Seng China Enterprises Index has fallen for five straight days, the longest losing streak since September. In June, the gauge is among the worst performing global benchmarks, along with the CSI 300 Index of mainland-listed firms.

China’s currency too has turned bearish after a strong rally pushed the PBOC to act to curb gains. The offshore yuan has lost 0.5% this month, the most in Asia. The government bond market is equally losing altitude, with the yield on the benchmark 10-year note increasing the most in six months on Friday.