Update(11:56ET): As expected China’s response has been swift, with the PLA military kicking off ‘live fire’ drills in multiple areas in waters surrounding Taiwan. Beijing announced these exercises will continue from the evening of Aug.2 (literally having started within the hour of Pelosi landing in Taipei) through the next days.

China has further vowed what a statement called “targeted military actions” in response to the official visit. Additionally this is to include missile tests off of Taiwan’s east coast…

It’s confirmed that Pelosi will stay the night, and is expected to next meet with Taiwan’s president Tsai Ing-wen on Wednesday, and then depart the island.

Some Western commentators are taking note of just how close to Taiwan’s coast the PLA exercises are taking place – even within Taiwan-claimed waters. “Beyond Taiwan’s territorial waters, China’s published maps show that they plan to conduct military operations within Taiwan’s Internal Waters (purple -approx line) in two areas. This is as close as you can get without landing on the beaches…” wrote one observer. 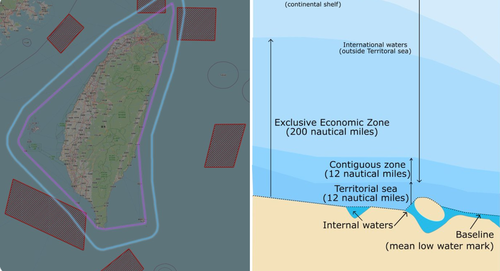 “As close as you can get” and therefore unprecedented, based on maps confirmed in state-run Global Times.

Given the location of PLA “shooting exercises” – said to be in six regions surrounding the self-ruled island, according to a map circulating posted to Weibo, a natural question arises: will the situation be safe and secure enough for Pelosi’s US Air Force-operated Boeing C-40C to depart the island the next day? Is China sending a stern message in ‘boxing’ off the island?

Based on what I know, in response to Pelosi’s possible visit to Taiwan, Beijing has formulated a series of countermeasures, including military actions.

Meanwhile some of the latest reaction statements from Beijing, via a Xinhua and Bloomberg:

Update(11:10ET): Some quick reaction headlines after Pelosi has landed in Taipei, and is expected to stay overnight:

“Our visit is part of our broader trip to the Indo-Pacific — including Singapore, Malaysia, South Korea and Japan — focused on mutual security, economic partnership and democratic governance.  Our discussions with Taiwan leadership will focus on reaffirming our support for our partner and on promoting our shared interests, including advancing a free and open Indo-Pacific region.  America’s solidarity with the 23 million people of Taiwan is more important today than ever, as the world faces a choice between autocracy and democracy.”

“Our visit is one of several Congressional delegations to Taiwan – and it in no way contradicts longstanding United States policy, guided by the Taiwan Relations Act of 1979, U.S.-China Joint Communiques and the Six Assurances.  The United States continues to oppose unilateral efforts to change the status quo.”

America’s solidarity with the 23 million people of Taiwan is more important today than ever, as the world faces a choice between autocracy and democracy. 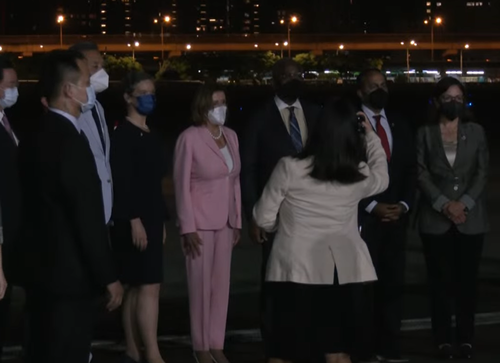 Update(10:17ET): Bloomberg is reporting China has closed airspace above the Taiwan Strait to all civilian aircraft. 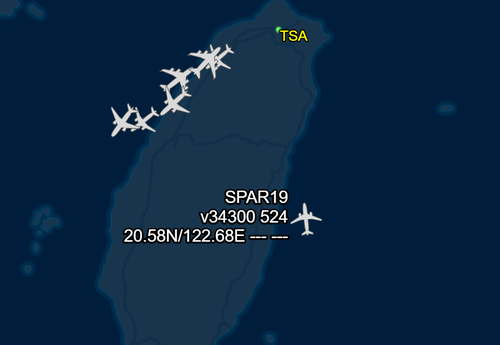 📹| Camouflage covers of anti-aircraft missiles have been removed at #Songshan Airport, where #Pelosi will land.

Update(9:58ET): Pelosi’s Air Force plane – the “most watched” aircraft in the world right now – is believed to be about 30 minutes out from landing at Taipei’s Songshan International Airport after departing Malaysia hours prior. It’s currently 9:58pm in Taiwan, with prior reports estimating a 10:20 touch down. The latest via newswires:

SPAR19, a USAF C40, has filed Taipei as its destination. pic.twitter.com/f37EAwaHIA

As of minutes ago on FlightTracker24… 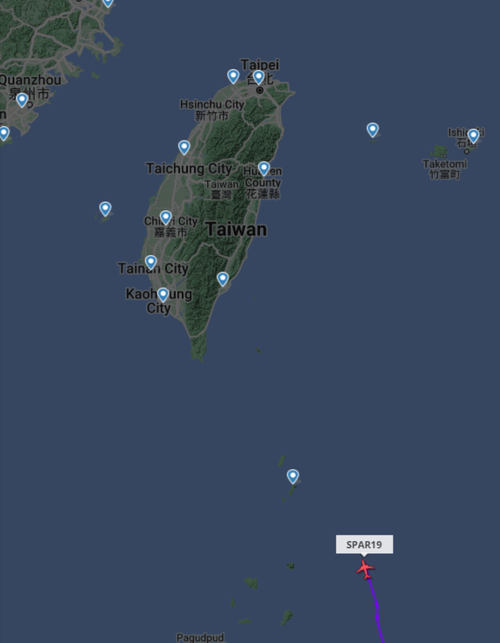 📹| #Taiwans tallest building, Taipei 101, displays a message to thank Nancy Pelosi and the U.S. as she approaches the island pic.twitter.com/EKMDqHdYfr

Update(8:27ET): Sources speaking to Reuters have detailed that Chinese warplanes buzzed the dividing line separating the Taiwan Strait earlier in the day as House Speaker Pelosi’s US Air Force plane is said to be en route. In what marks the clearest sign that Beijing has prepped potential ‘military options’ – a flurry of Eastern Theater Command activity is taking place in waters and airspace just outside the self-ruled island of Taiwan:

The Chinese aircraft repeatedly conducted tactical moves of briefly “touching” the median line and circling back to the other side of the strait on Tuesday morning, while Taiwanese aircraft were on standby nearby, the person said.

There have been conflicting reports that Taiwan’s forces are on “high alert” – particularly on the outer islands, however, which the defense ministry has sought to downplay.

📹| A new convoy of Chinese Army armored vehicles has arrived in #Fujian, the closest province to #Taiwan.pic.twitter.com/pr24fQbg0t

At the same time, social media continues to be flooded with videos appearing to show Chinese military hardware and armored convoys surging into Fujian province, which is the part of the mainland nearest Taiwan.

In follow-up, The South China Morning Post writes that this stepped up PLA activity is expected to continue:

The PLA could send warplanes across the median line that divides the Taiwan Strait if US House Speaker Nancy Pelosi visits the democratic island, and analysts say it could start happening more regularly.

…A military source close to the People’s Liberation Army said it would step up its pressure campaign against Taiwan in response to a Pelosi visit and that “Beijing will give Taipei a hard time” afterwards.

But importantly, China’s defense ministry has emphasized it has never recognized the legitimacy of the “dividing line” – claiming the whole of the territorial waters as China’s.

Confirmation is now coming out that the official website of Taiwan’s presidency came under cyberattack earlier in the day.

President spokesman Xavier Chang described it as notably severe, “some 200 times worse than usual” – he said according to Bloomberg. At one point the website was inaccessible, but later came back online, he described, saying further that “government agencies will continue to strengthen monitoring to maintain the security of national information and communications, and the stable operation of key infrastructure.”

It’s after 7:00pm in Taiwan, and Reuters reports that the military aircraft likely carrying House Speaker Nancy Pelosi and her delegation has departed Malaysia and could be bypassing the South China Sea, where the Chinese navy has been conducting sporadic military drills.

The plane widely believed to be Pelosi’s departed Kuala Lumpur at 3:42pm local time, with the destination listed as “N/A”. However some have noted another US Air Force C-40C had landed in Kuala Lumpur on the same day Pelosi was there, so it’s still uncertain which aircraft could be transporting the House Speaker.

Reuters further observes that “In addition to the military incursions into Taiwan’s air defense identification zone (ADIZ) on a nearly daily basis this year, two Chinese warships – a missile destroyer and guided-missile frigate – were also tracked in international waters off the coast of Lanyu Island in eastern Taiwan early Tuesday morning.”

On Monday evening, Taiwan and US media sources said she’s expected to touch down at Taipei Songshan Airport at 10:20pm Tuesday night.

China’s foreign ministry has repeated that it’s prepared to respond to what it says is a blatant violation of its sovereignty and the One China principle with “forceful measures”. Some serious military hardware is meanwhile being maneuvered on the ground in nearby Fujian province, which sits just across from the self-ruled island.

The PLA’s Eastern Theater command appears to still be engaged in ‘live fire’ drills in a show of force.

Large military convoys have been seen traversing civilian streets in Fujian. It’s long been known that any serious Chinese military action threatening Taiwan would likely be staged from this portion of the mainland which sits most closely to Taiwan, just across the strait.

As for US Navy positioning, Reuters has separately reported:

Four U.S. warships, including an aircraft carrier, were positioned in waters east of Taiwan on what the U.S. Navy called routine deployments on Tuesday amid Chinese anger over U.S. House of Representatives Speaker Nancy Pelosi’s visit the island.

Meanwhile, there are unconfirmed reports emerging that the website of the Taiwan presidency has been subject to a cyberattack Tuesday, just as Pelosi’s plane appears to be en route.

The Chinese foreign minister has also just issued a fresh threat, saying Pelosi is playing “with fire” – repeating President Xi’s words last Thursday in his phone call with Biden – and says she risks the US becoming an enemy of “1.4 billion Chinese people” and thus “will not meet with a good end.”

…Some US politicians who selfishly play with fire on the Taiwan question, becoming the enemies to 1.4 billion Chinese people, will not meet with a good end, Wang said after attending SCO FMs meeting and paying visits to some countries in Central Asia https://t.co/3rBG3A2koj