1. China’s bond market proved to be a haven in the global rout.

In part, that reflects China’s status as the leading indicator of the global economy as it was the first to emerge from the pandemic. Chinese bond yields started to climb in April and have been largely unchanged since November. In a sense, the global bond market is just experiencing what the Chinese market went through a few months ago. 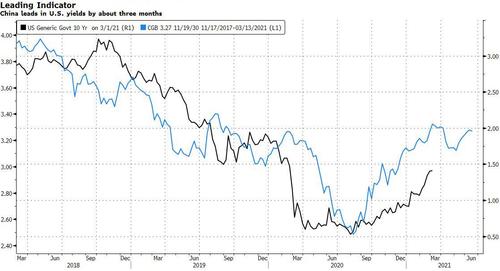 The fact that the two economies are in a slightly different phase suggests that adding unhedged Chinese bonds provides the benefit of diversification. Indeed, Chinese bonds and their global counterparts have exhibited low correlation over the past two years.

Investors have pushed forward their rate expectations, causing the 5s30s part of the yield curve to flatten. The euro-dollar futures now price in the first rate hike as soon as December 2022. That seems to be aggressive, as the Fed’s dot plot looks for no rate hike through 2023.

Yet, while the rising real yields wreaked havoc in some segments of the markets, financial conditions only tightened marginally. As St. Louis Fed President James Bullard put it bluntly, the 10-year yield has not returned to pre-pandemic levels. 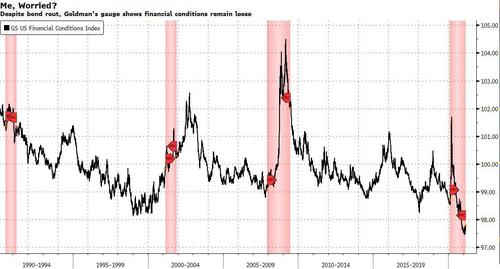 So the Fed will want to see how the bond moves play out before “changing its tune,” Fed watcher Tim Duy noted. In other words, fasten your seat belt.

3. Biden isn’t in a rush to reset U.S.-China relations.

Katherine Tai, Joe Biden’s pick for U.S. trade representative, told senators during her confirmation hearing that China “needs to deliver” on the promises it made in the phase-one agreement. It is the strongest signal yet that the new administration plans to build on the accord brokered by its predecessor rather than scrap it. William Burns, Joe Biden’s nominee to lead the CIA, called China’s “adversarial, predatory leadership” the biggest threat to the U.S.

For its part, the official China Daily said in an editorial that Biden’s early policy toward Beijing “smacks of Trumpism,” and the approach so far “affords little optimism.” Meanwhile, the government said Friday that it will extend punitive tariff exemptions for 65 items imported from the U.S.

It sounds like a stick and carrot , doesn’t it?