Late last night, amid rising fears that the Chinese market rout could accelerated further, we reported that China’s “National Team”, i.e., the local plunge protection team, was about to be summoned with local press Securities Daily reporting that “the market plunge is unsustainable” and will gradually stabilize. And just a few hours later, that’s precisely what is happening because as Bloomberg reported moments ago, China’s securities regulator convened a virtual meeting with executives of major investment banks on Wednesday night, to restore market calm and to “ease market fears about Beijing’s crackdown on the private education industry.”

According to Bloomberg sources, the hastily arranged call, which included attendees from several major international banks, was led by China Securities Regulatory Commission Vice Chairman Fang Xinghai. The highlight: bankers left with the message that the education sector policies were targeted and not intended to hurt companies in other industries.

In other words: buy the dip.

The scrambled response, which followed state-run media articles suggesting the rout is overdone, is “the latest sign that Chinese authorities have become uncomfortable with a selloff that sent the nation’s key stock indexes to the brink of a bear market on Wednesday morning” when the CSI 300 index traded just shy of a 20% drop from recent highs. 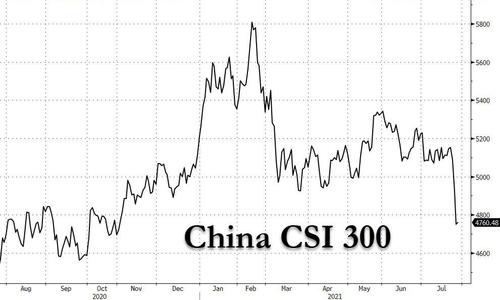 The intervention followed a three-day plunge that erased nearly $800 billion of market value, before spilling over into everything from the yuan to the S&P 500 Index and U.S. Treasuries during one of its most extreme phases on Tuesday amid rumors that foreign investors were yanking funds from Chinese markets.

And while China’s CSI 300 Index rebounded from early losses on Wednesday to close with a 0.2% gain, we expect today’s intervention to cause a fresh round of aggressive dip buying. Banks, viewed as prime targets for intervention because of their heavy weightings in benchmark indexes, were among the biggest contributors to the advance.