While the news flow in China and Hong Kong has been grim, there have been some positive developments, most notably on the policy front for real estate and tech companies. So far, it’s more piecemeal than a complete policy U-turn.

By the same token, a lot of bad news seems to be reflected in the markets. In fact, bearish options in Hong Kong stocks are dwindling to the lowest level in two decades, suggesting investors see limited downside.

Yet the currency settlement data showed that the portfolio outflow was more than offset by China’s trade surplus. That resulted in a net currency inflow of around $9 billion in April, according to Goldman Sachs’ estimate. The yuan’s record 4% decline in April, therefore, seems to have been driven more by sentiment than faster deterioration in balance of payments. Some currency depreciation may be welcome and tolerated by Beijing, but a repeat of the depreciation at a similar speed and magnitude is less likely. 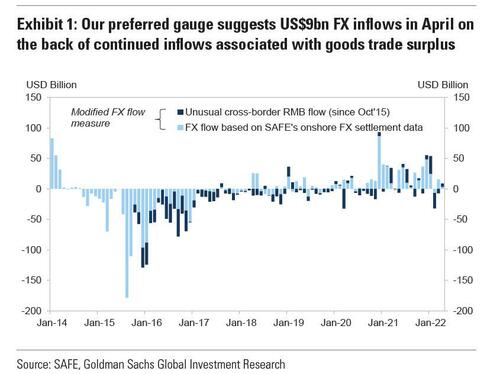 Shifting gears to the tech front, Vice Premier Liu He gave an unusual public show of support for digital-platform companies on Tuesday. At a symposium with the heads of some of the nation’s largest private firms, Liu said that the government will support the development of digital-economy companies and their public listings. Platform companies are encouraged to participate in major national scientific and technological innovation projects.

The show of support after a yearlong crackdown is more symbolic. After all, some actions – such as anti-monopoly measures, the delisting of Didi and the crackdown of after-school tutoring companies – are irreversible. Indeed, the nearly 5% gain in the Nasdaq Golden Dragon Index of Chinese ADRs in the U.S. on Tuesday is in-line with its normal relationship with the Nasdaq Composite, suggesting the rally is more about the global sentiment than China specific.

What it does show is that a lot of bad news seems to be priced in and the stocks are susceptible to marginal good news. Indeed, the implied volatility of China’s stocks has been lower than realized volatility, suggesting traders don’t see markets becoming even more volatile. In Hong Kong, the put/call open-interest ratio for the Hang Seng Index has dropped to the lowest level in two decades. That shows downside hedges have been steadily removed as the market cratered. Historically, that tends to mark the bottoming process.

Where we go from here depends on what happens next with Covid in China. But the soaring unemployment rate may alarm Beijing enough that more substantial policy counterattacks are in the making, giving beaten-down assets such as tech stocks and real estate some reprieve.