Authored by Techno Fog via The Reactionary,

My late Friday night involved hitting refresh on PACER every so often, incurring the $0.10 charge for each search result as I waited on Special Counsel John Durham’s latest filing in the Michael Sussman case. (Exciting, I know.)

The motion exceeded expectations, discussing CIA conclusions that Sussmann was providing implausible data to federal authorities, providing CIA notes regarding their meeting with Sussman, and confirmation that they essentially spied on President-Elect Trump. 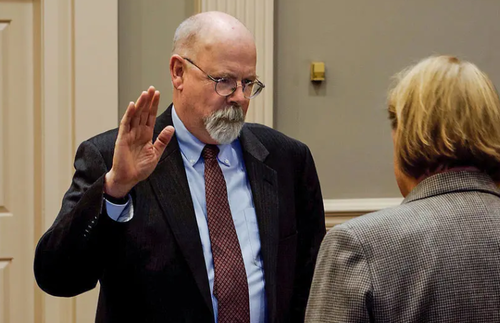 The motion can be found here. It was filed as part of the government’s efforts to convince the court that the evidence it seeks to admit in Sussman’s trial is relevant and admissible. Let’s go through the most important parts.

Durham provided to the Court two sets of notes related to Sussman’s representations to the CIA. The first was from Sussman’s January 31, 2017 contacts with a CIA employee where Sussman discussed wanting to provide to the CIA data on “the presence and activity of a unique Russian made phone around President Trump.” It was said that this secret activity started in April 2016 and continued after Trump’s “move to the White House.”

Sussman alleged the Russian phone (YotaPhone) was always close to Trump (“only around the President’s Movements”), surfacing at his Trump Tower Network in April 2016 and being used through Wi-Fi at Trump’s Grand Central West apartment. The phone even “appeared with Trump in Michigan” when he was interviewing a Cabinet Secretary.

At a minimum, this confirms what we reported nearly two months ago: that the Trump transition data was passed to the CIA. Yet it’s also more than that. The CIA was provided with data all the way back from April 2016.

Why does April 2016 matter? Because Russia was alleged to have hacked “the Democratic Congressional Campaign Committee and DNC networks in April 2016.” Recall that “Crowdstrike was contacted on April 30, 2016 to respond to a suspected breach” of the DNC.

The CIA Notes Part 2: Sussmann’s February 9, 2017 meeting with the CIA

That January 31, 2017 conference was used to schedule the February 9, 2017 meeting with the CIA. At that meeting, Sussman repeated his allegations that a “Russian-made Yota-phone” had been seen at Trump properties and had traveled with Trump to Michigan. He further alleged that “In December 2016, the Yota-phone was seen connecting to WIFI from the Executive Office of the President (the White House).”

A brief but necessary aside: The Washington Post alleged us to have fanned “the flames” on the Sussman/Joffe spying operation, taking us to task for stating (correctly): “They spied on Trump.” I hope the Washington Post is reading this, because the CIA notes confirm what we reported and what we told them via e-mail. Techno 1, WaPo 0.

Back to the Durham Filing – and the CIA’s analysis of the Sussman/Joffe data.

The CIA reviewed the Trump/YotaPhone data (and the Alfa Bank data) in early 2017. The fact that the CIA accepted this data on President Trump is its own scandal. In any event, the CIA’s findings are significant, as they concluded that the data was not “technically plausible” and was “user created and not machine/tool generated.” 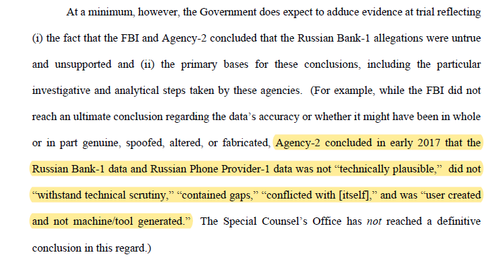 (I’ve been asked about the last part of that paragraph, which says the “Special Counsel’s Office has not reached a definitive conclusion in this regard.” The term “definitive conclusion” stands out, making me suspect he has “initial” conclusions on the data. Durham’s filings in this case suggest he agrees with the CIA.)

Anyway, what a finding by the CIA. Of course, this only leads to more questions:

For that last question, consider this revelation from a previous Durham filing:

As to those questions of a conspiracy, Durham’s granting of immunity provides some insight. As we suspected back on April 5, “Researcher-2” (identified as David Dagon) has been given immunity. The reason? So that Durham can “uncover otherwise-unavailable facts” relating to the Alfa Bank project.

Dagon being granted immunity is certainly important, as Durham states that Rodney Joffe – who led the Alfa Bank hoax effort – remains a “subject” of the investigation. While Sussman and others argue that it’s impossible to prosecute Joffe because of the 5-year statute of limitations, Durham disagrees, stating: “defense counsel is not – and could not be – aware of all the evidence that the Government has collected and continues to collect, or the possible violations of law it is investigating.”

Durham will also be granting immunity at trial “for an individual who was employed at” Fusion GPS. I initially suspected this was Christopher Steele but was steered in the right direction after some smart folks noted the person was “employed” at Fusion GPS (as opposed to Steele, who was “retained” by Fusion GPS). This person might be Laura Seago.

This former Fusion GPS employee will likely testify to “limited information pertaining to” Christopher Steele. As Durham puts it: this will include whether Sussman was acting on behalf of the Clinton Campaign when he relayed the Alfa Bank allegations.

Finally, I leave you with some questions to consider. Start asking why Sussman and Joffe were so desperate to provide the FBI and CIA with dirt purportedly linking Trump and Russia. Sussman himself provided false statements to federal officials, and it’s becoming more and more likely that someone potentially fabricated this evidence. Sussman and Joffe risked charges – and thus jeopardized their lucrative careers – to tie Trump to Russia.

Considering the personal costs to both men, are we to believe that this was only about politics?

Or maybe this all leads back to the DNC hack…

The Reactionary is a reader-supported publication. To receive new posts and support my work, consider becoming a free or paid subscriber.