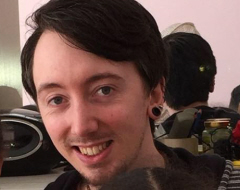 Coming on the clouds of heaven – Part 2

Then the sign of the Son of Man will appear in heaven, and then all the tribes of the earth will mourn, and they will see ‘the Son of Man coming on the clouds of heaven’ with power and great glory.

When people read Jesus saying that he will be “coming on the clouds of heaven with power and great glory” in Matthew 24:30, it often taken to mean that he will be doing that literally as opposed to figuratively.

Careful now, before you put on your heretic hunting hats and grab your pitchforks — let me explain why I say that Jesus wasn’t telling his followers he would be surfing across the sky on literal clouds.

As I pointed out in my last post, to truly understand Jesus, and indeed the New Testament, we need to better know the Old Testament texts. This phrase that Jesus used about “coming on the clouds” is a reference to a prophecy in the book of Daniel in which Daniel see’s one who ‘looks like a son of man’ (ie. a person with a human form) ‘coming with the clouds of heaven’ which has all sorts of implications that we often miss by either not knowing much of the Old Testament, or because we’re not Jewish with a better understanding of these prophecies. As a small note too, it’s also these visions of Daniel that Revelation in the New Testament takes a lot of its imagery from and describes the same events – I will be touching on that more in the next part in this series.

Often times, our thoughts on these phrases or this kind of prophetic language, is coloured by our upbringing or teaching from a church, or even by secular culture which has taken this imagery and “hollywoodized“ it. You need only Google for “apocalypse” or “armageddon” to see this; and although it can be fun from a film watching perspective, it’s not entirely helpful if we are letting modern-day secular films and interpretation influence our reading and understanding of Scripture.

Lets begin by looking at what Daniel saw. A little context first: the setting is Daniel in the throneroom of God, watching as the “court sat in judgment, and the books were opened” to begin a judgement process.

As I watched in the night visions,

I saw one like a human being
coming with the clouds of heaven.
And he came to the Ancient One
and was presented before him.
To him was given dominion
and glory and kingship,
that all peoples, nations, and languages
should serve him.
His dominion is an everlasting dominion
that shall not pass away,
and his kingship is one
that shall never be destroyed.

That line which says “like a human being” is translated in some Bibles as “like a son of man” which makes Jesus’s reference a little clearer when comparing the texts, though the meaning is the same.

So what’s happening in Daniel’s vision, and why is Jesus talking about it?

First of all, Jesus isn’t just making a reference to this vision of Daniel by talking about clouds. Jesus repeatedly calls himself the “Son of Man” throughout his ministry, which is a veiled reference to what Daniel saw. When the Pharisees were questioning Jesus during his arrest, they asked him bluntly if he was the Messiah (Matt 26:63-65), and how did Jesus answer? By making a reference to Daniel 7:

Jesus said to him, “You have said so. But I tell you,

From now on you will see the Son of Man
seated at the right hand of Power
and coming on the clouds of heaven.”

The reaction of High Priest says it all: Then the high priest tore his clothes and said, “He has blasphemed!” This was more than just an idle phrase, this was Jesus making himself equal to God and the Jewish leaders understood this which is why they got so angry. The disciples/apostles understood this about Jesus also, which is what they preached and wrote about and also why they worshipped him (cf. Ps 110:1, Jn 5:18; Matt 26:64, Acts 2:33, Acts 5:31, Rom 8:34, Col 3:1, Heb 1:3, Heb 12:2). 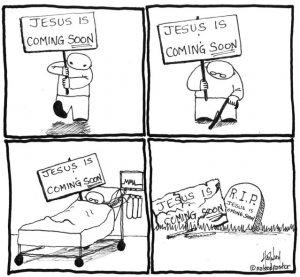 ‘Jesus is coming soon’ by Nakedpastor

But what’s all this got to do with Jesus coming on the clouds? If Jesus is making a reference to a vision in Daniel, which describes something that happens in a purely spiritual realm, then why all of a sudden, does it become a literal, physical event when it concerns Jesus? Daniel’s vision is about the Son of Man coming before the “Ancient One” (ie. God the Father) and being presented with a kingdom, power and authority that will never end – which is exactly what Jesus was preaching about when he said the Kingdom of God/Heaven had arrived with his first coming, even though it was not how the Jewish leaders and people had expected it. It is a spiritual and mystical Kingdom that dwells within us, and is evidenced by our lifestyles being that of those who live under a godly reign in this physical world (Lk 17:20-21; Jn 18:36).

So when Jesus says that he is coming again, and doing so “on the clouds,” we must remember that this is a reference to a prophecy set within a context of God doing some judging (Dan 7:10). This language isn’t unique to Daniel either, but is a typical example of apocalyptic imagery used by prophets.

*A small note to help clarify some terms here: “apocalypse” is a Greek word which simply means “revealed” or “revelation” – as in, being shown something by divine beings/intervention that was once hidden, and is also a genre of writing in Judaism and Christianity encapsulating prophetic texts of this nature. Likewise, “Armageddon” is a Hebrew word which is the name of a place in Israel. Only in modern culture have these words taken on the meaning “end of the world.”

With that in mind, let’s look at the other references to God coming on the clouds through the Old Testament, and what it means. I’ll add some emphasis to some of the verses just so you can see what I’m pointing out.

See, the Lord is riding on a swift cloud
and comes to Egypt;
the idols of Egypt will tremble at his presence,
and the heart of the Egyptians will melt within them.
I will stir up Egyptians against Egyptians,
and they will fight, one against the other,
neighbor against neighbor,
city against city, kingdom against kingdom;

The mountains quake before him,
and the hills melt;
the earth heaves before him,
the world and all who live in it.

All the host of heaven shall rot away,
and the skies roll up like a scroll.
All their host shall wither
like a leaf withering on a vine,
or fruit withering on a fig tree.

and I will bring you into the wilderness of the peoples, and there I will enter into judgment with you face to face.

Notice a theme going on here?

This brings us right back to the disciples asking “what will be the sign of your coming and of the end of the age” and Jesus saying that he would “come on the clouds with power and great glory.” The first thing to take note of here is that the disciples as about the end of the age, although some Bible mistranslate this as “end of the world,” which is incorrect since if you check out the underlying Greek text, it uses the word aion (we would understand as “eon” or “age” in English) and not the word for “world” (Gk. kosmos).

Jesus also says that “the sun will be darkened, and the moon will not give its light; the stars will fall from heaven, and the powers of heaven will be shaken” which sounds pretty cataclysmic on the face of it, until you realise that this yet another reference to an Old Testament prophecy, this time from Isaiah, and possibly also Ezekiel as they use the same kind of language. I’ll quote the relevant Isaiah passage, but you can read the other references here: Isa 34:4-5; Ezek 32:7-8.

The oracle concerning Babylon that Isaiah son of Amoz saw …

For the stars of the heavens and their constellations
will not give their light;
the sun will be dark at its rising,
and the moon will not shed its light.

Note that the theme here continues – it is all concerning God visiting a nation with judgement. These nations and cities were destroyed by armies that God used as his weapon of choice, as it were. None of it was a literal event that saw God flying across the sky on clouds, or the stars actually falling out of the sky and going dark! This is all figurative language for a dramatic and drastic change in the world; the heavenly bodies, such as stars and moons etc. are often references to earthly kings and nations, political powers and systems, and their power on or over the Earth.

These are the things that God was going to shake up, blot out and cause to fall: earthly kingdoms, powers and systems. Which is exactly what Jesus was prophesying about in Matthew 24 — the destruction of the Temple and the end of the Old Covenant age, which will usher in the New Covenant in its fullness along with a new age of Grace through and by the life, death, resurrection and forgiveness of Christ!

Jesus’s coming which he spoke of here was never to do with a physical return, but was always a prophetic reference to him visiting Jerusalem in judgement, just like God had done in previous generations, when he spoke to the people through prophets using this type of figurative language.

When we can clearly see that all of these visitations by God in the Old Testament, using the same phrases and language that Jesus used, were prophetic and symbolic references to God using armies and other nations to bring war and destruction on something as judgement against them as though God himself had done it, why then do we suddenly expect the complete opposite to happen when Jesus comes?

Now, people will still cling to a physical and literal interpretation of this and use other New Testament quotes to back up that view, such as 2 Peter 3:4,9 which says:

…saying, “Where is the promise of his coming? […] The Lord is not slow about his promise, as some think of slowness, but is patient with you, not wanting any to perish, but all to come to repentance.

Though the dating and authorship of 2 Peter is doubted in academic circles, if we assume that Peter did write this letter, and did so before his death, then it had to be written before 70 AD which is when the Jewish War was happening and the Temple destroyed. Which is what Jesus used as the focal point in his reference to his ‘coming’.

You can’t use a quote written prior to 70AD to proof text Jesus not coming yet, though that is what often happens. It’s like someone in 1938 quoting H.G. Wells saying in 1914 that WWI will be the “war to end all wars” when history quite clearly shows the opposite.

So to conclude, there’s nothing in what Jesus says to suggest anything other than a reference to judgement by God on Jerusalem and the Jewish nation, using the symbolic language of the prophets to make his point, that what was to comes was going to be God’s judgement on them!

In the next part of the series I will be taking a closer look at Matthew 24 (and the parallels in the other Gospels) alongside Revelation and seeing how, and if, history shows us that what Jesus prophesied as the signs of his coming were fulfilled.