In 1964, Stanley Kubrick released a dark comedy classic titled “Dr. Strangelove or: How I Learned to Stop Worrying and Love the Bomb.” The title captured the absurdity of getting people to embrace the concept of weapons of mass destruction. The movie came to mind recently with the public campaign of Facebook calling for people to change her attitudes about the Internet and rethink issues like “content modification” – the new Orwellian term for censorship. 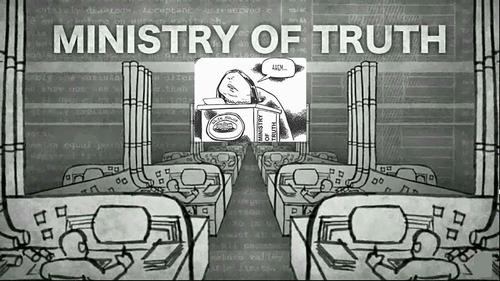 The commercials show people like “Joshan” who says that he was born in 1996 and grew up with the internet.” Joshan mocks how much computers have changed and then asks why our regulations on privacy and censorship cannot evolve as much as our technology. The ads are clearly directed at younger users who may be more willing to accept censorship than their parents who hopelessly cling to old-fashioned notions of free speech.  Facebook knows that it cannot exercise more control over content unless it can get people to stop worrying and love the censor.

There was a time when this would have been viewed as chilling: a corporate giant running commercials to get people to support new regulations impacting basic values like free speech and privacy. After all, Joshan shows of his first computer was a “giant behemoth of a machine” but that was before he understood “the blending of the real world and the internet world.”

The Facebook campaign is chilling in its reference to “privacy” and “content modification” given the current controversies surrounding Big Tech. On one level, the commercial simply calls for rethinking regulatory controls after 25 years. However, the source of the campaign is a company which has been widely accused of rolling back on core values like free speech. Big Tech corporations are exercising increasing levels of control over what people write or read on the Internet. While these companies enjoy immunity from many lawsuits based on the notion of being neutral communication platforms (akin to telephone companies), they now censor ideas deemed misleading or dangerous on subjects ranging from climate denial to transgender criticism to election fraud.

Moreover, Facebook knows that there is ample support for increasing censorship and speech regulation in Congress and around the world. Free speech is under attack and losing ground — and Facebook knows it.

The rise of the corporate censor has challenged long-standing assumptions of the free speech community. Our Constitution and much of free speech writings are focused on the classic model of government censorship and state media. What we have seen in the last few years is that corporations have far greater ability to curtail speech and that you can have a type of state media without the state.

Free speech advocates are not the only ones to notice. Authoritarian figures have recognized these companies as competitors. Recently Russian President Vladimir Putin denounced Big Tech as a threat to “Democratic institutions” – a farcical objection from one of the world’s most blood-soaked, anti-democratic figures.

Other leaders have simply sought an alliance with the companies for mutually beneficial censorship. Countries like India appear to have out-sourced censorship duties to Big Tech. Twitter admitted recently that it is actively working with the Indian government to censor criticism of its handling of the pandemic. There are widespread reports that the Indian government has misrepresented the number of deaths and the true rate of cases could be as much as 30 times higher than reported. Thousands are dying each day due to a shortage of beds, oxygen, and other essentials. Twitter is saying that it had the power to “withhold access to the content in India only” if the company determined the content to be “illegal in a particular jurisdiction.” Thus, criticism of the government in this context is illegal so Twitter has agreed to become an arm of the government in censoring information.

Sikh groups last year objected that Facebook censored Sikh posts during #SikhGenocide remembrance movements. They also objected to such censorship by Instagram and Twitter, was centered on stifling anything linked to the Khalistan and likely was done at the behest of the Indian state.

These corporations are now offering politicians what they have long desired in controlling speech and curtailing criticism. Leaders in this country have encouraged the same mutually beneficial alliance. Politicians know that the First Amendment only deals with government censorship, but who needs “Big Brother” when a slew of “Little Brothers” can do the work more efficiently and comprehensively.

When Twitter’s CEO Jack Dorsey came before the Senate to apologize for blocking the Hunter Biden story before the election, he was met by demands from Democratic leaders for more censorship. Senator Chris Coons (D., Md.) pressed Dorsey to expand the categories of censored material to prevent people from sharing any views that he considers “climate denialism.” Likewise, Senator Richard Blumenthal (D., Conn.) chastised the companies for shying away from censorship and told them that he was “concerned that both of your companies are, in fact, backsliding or retrenching, that you are failing to take action against dangerous disinformation.” Accordingly, he demanded that they “commit to the same kind of robust content modification playbook in this coming election.”

That brings us back to Facebook’s glitzy media campaign. Polls show that younger Americans are more open to censorship after years of speech regulation in their high schools and colleges. They have grown up with media figures like CNN’s host Brian Stelter calling censorship simply a “harm reduction model.” They have read writers and editors embracing book banning and blacklisting. They have been conditioned to fear unrestrained free speech. making them natural allies in “evolving” with Big Tech companies.

What is fascinating about Joshan and his equally eager colleagues Chava and Adam is that they tie changes in technology to possible changes in core principles like reconsidering “content modification.” They were all born in 1996 — the sweet spot for censors between the Millennials and Generation Z members. Those generations, and particularly Gen Z, are the most likely to come stop fearing the censor and love “content modification.” Joshan and his technologically woke friends simply want us (and regulations) to “change” with our computers. After all, it may not be our content that needs to be “modified” but ourselves in our attitudes and assumptions. Just do not be surprised if that upgrade to You 2.0 requires the removal of the free speech bug that is inhibiting your “blending of the real world and the internet world.”