Criminals who repeatedly targeted an auto shop in Spring Lake, North Carolina by leaving racist graffiti referencing the KKK and Nazis turned out to be two African-American men after the owner caught them on camera. 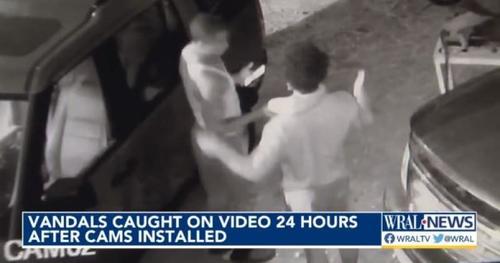 Business owner Dwyane Haynesworth (who is black) took action after having a car stole off his lot and then discovering the racist graffiti, which included a drawing of a swastika.

After setting up the security cameras, that same night the criminals returned and broke into more vehicles before smashing windows and attempting to hot wire one of the cars.

The footage revealed the culprits to be two black men.

“By now, police must know to narrow down their list of suspects whenever racist graffiti is left at the scene of a crime. That doesn’t fit the modus operandi of Caucasians,” writes Dave Blount.

“Leftists who demonize and attempt to defund or otherwise hamstring the police are not siding against whites in favor of blacks, despite the way the liberal establishment frames it. They are siding against Dwyane Haynesworth in favor of punks who pointlessly destroy other people’s property.”

While the criminals in this instance clearly weaponized the racist graffiti in a bid to deceive authorities, fake hate crimes have become an all too common occurrence in America over the last five years.

Back in 2019, we highlighted the case of Amari Allen, a 12-year-old African-American girl who claimed a group of white boys cutting off her dreadlocks.

The entirety of the mainstream media, as well as lawmakers like Rashida Tlaib, fell for and amplified the story before Allen admitted she made it all up.

The gunman in Boulder who killed 10 people at a supermarket back in March also routinely threatened his classmates with threats of filing fake hate crime charges after violently attacking them, eyewitnesses told the media.

In the age of mass Silicon Valley censorship It is crucial that we stay in touch. I need you to sign up for my free newsletter here. Support my sponsor – Turbo Force – a supercharged boost of clean energy without the comedown. Also, I urgently need your financial support here.