Cristiano Ronaldo sent shockwaves across the beverage industry and the football world this week when, at a press conference in Monday, he took two bottles of Coca-Cola sitting in front of him and placed them aside in favor of a bottle of water.

The gesture – which would be deemed perfunctory and meaningless almost anywhere else in the world – sent shares of Coca-Cola plunging later in the week. The company lost about $4 billion from its valuation in the sell off.

The incident not only echoed throughout the sports and beverage worlds, but was then covered extensively by international media.

Ronaldo’s snub of Coca-Cola highlighted the “flipside of the rise of sports influencers”, according to a new Bloomberg Op-Ed. Ronaldo’s seemingly meaningless gesture showed how “individual star power, amplified by huge social media followings, can upend partnerships that companies have struck with teams and events,” author Andrea Felsted wrote this week.

And the logistics of the incident represented a major backfire for Coca-Cola, who is one of the official sponsors of UEFA Euro 2020, the tournament that Ronaldo was playing in prior to the presser. However, the company doesn’t sponsor Ronaldo, who is the world’s most followed footballer online, himself.

“The sheer clout of influencers today means that companies even on their periphery can’t escape the perils that come with them,” the op-ed argues. Ronaldo has 300 million followers online. 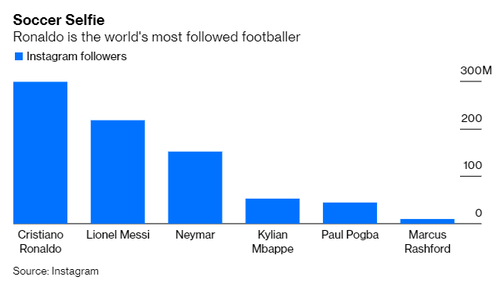 Companies are becoming divided about how best to allocate capital to influencers and athletes.

Brands like Adidas and Coca-Cola have cut spending on individual athlete sponsorships and have focused more on team-wide/tournament-wide sponsorships, the op-ed notes. Meanwhile, Nike has continued to rely on the star power of a few massive celebrities to help drive its brand: Michael Jordan, Serena Williams, Naomi Osaka and LeBron James, to name a few.

And while there are usually strict rules regarding company sponsorships and while companies will sometimes adhere to players’ personal preferences, the piece notes…

For example, some object to being associated with alcohol and gambling. Paul Pogba, who is a practicing Muslim, on Tuesday removed a bottle of Heineken from the press conference held after he was named Man of the Match following France’s win against Germany.

…there are no rules governing the exact situation Ronaldo placed Coca-Cola in this week.

Thus, the op-ed concluded by pointing out the continuing “obvious risks” of influences misbehaving or leaving for other sponsors. You can read the full op-ed here.