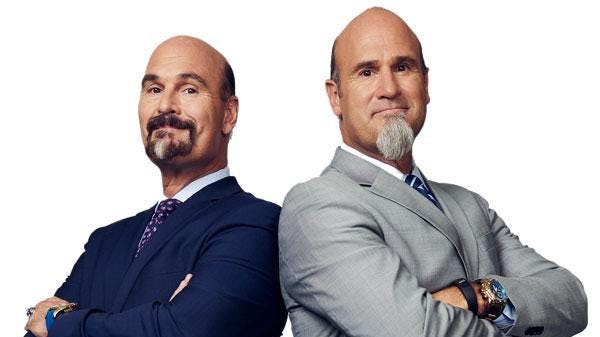 Crypto Could Become “A True Competitor” To The U.S. Dollar: Jon Najarian

This is an interview with Jon “Dr. J” Najarian. Jon was a linebacker for the Chicago Bears before he turned to trading on the Chicago Board Options Exchange. He then became a member of the CBOE, NYSE, CME and CBOT and worked as a floor trader for some 25 years.

Today, he is a professional investor that specializes in options. He is also a cast member of the “Halftime Report” and “Fast Money” shows on CNBC. Jon and his brother Pete invest in and work with start-ups via Rebellion Partners, a venture consulting firm they launched in 2015.

In 2016 Jon and Pete co-founded Market Rebellion, a company focused on educating the individual investor.

Q: Hi Jon, thanks for taking the time to answer some questions for my Fringe Finance readers. Right off the bat – I have been asking this question of everyone I interview and want your perspective on what the biggest threat facing the market is right now, and why?

I think the biggest threat is that the Fed knows the inflation genie is out of the bottle and that they have this Sophie’s choice of which to address; inflation by raising rates, or a stagnating economy and new [Covid] variant.

I’m not as worried about Iran, Russia or China as I am about how the Fed deals with inflation and the economy. A fast rise in rates will absolutely kneecap the economy and take the stock market with it.

Have you and your brother ever considered crypto to be a multi trillion trojan horse that could cause systemic problems? When China exits the crypto market, could it be because they are worried about a crash – or do you think it’s just so it doesn’t compete with the digital yuan?

I know you’re not a big crypto fan Chris, but I truly believe that fiat currencies need the discipline of a legitimate competitor. Not a competitor in transactions, although that is coming, but a competitor in a store of value.

The main reason Bitcoin was created was that someone or some group (Satoshi Nakamoto) saw that governments were taking advantage of their printing presses and [their] ability to create more money out of thin air.

As crypto hovers near $3 trillion in market cap, I believe we are close to creating that true competitor to the dollar. If we have failures of repaying of debt and or other monetary issues, people, especially young people will get deeper into crypto. Could that end badly? Sure. But I think crypto has the potential to discipline central bankers.

What stocks would you avoid at all costs right now?

Sadly, much as I love our meme stock brethren, I think the GameStops and AMCs are dead money. I think they are the modern equivalent of the emperor’s new clothes.

I asked this to a respected trader last week and want your take. Listening to the Cathie Woods of the world, I have to wonder: is it truly “different” this time? Meaning, will we normalize at these PE ratios and this balance of growth vs. value? Or will PEs eventually crash back under 10 and will value be a virtue again?

I think it will be a while before we see normalized PEs. I think stuff like the metaverse will keep this party going a while longer. Perhaps a year or more. But past that, yes I think we need an adjustment back to normalcy.

You guys are options experts. What do you make of the option volume and activity in Tesla?

I think we’re both surprised by the volatile moves TSLA makes on a weekly basis. The costs of the calls and puts is among the highest among active options, as it is not uncommon to see a call or put that is trading $15 or $20 trade 20,000 or 30,000 contracts. That’s a ton of volume for a stock 1/10th the price of TSLA’s $1100.

I guess overall the reason we see so much activity is that so few people cannot afford to buy shares, so they have one choice: trade options.

Just like that other Wall Street adage, TINA , there is no alternative.

Do you think options are being weaponized to create gamma squeezes in the NASDAQ? Why or why not? And if so, what consequences could there be for this?

I think options have always been used by shrewd traders to “bully” stocks up or down.

We witnessed this in the infamous Herbalife fight between Carl Icahn and Bill Ackman. Carl didn’t have a dog in the hunt, but when he saw that Ackman was short big in HLF, he bought OTC calls and paid for them by selling OTC puts in HLF. That effectively put the squeeze on Ackman and any shorts that had joined him.

What sectors interest you the most for long-term investments from this point, whether or not we wind up having  a pullback. Is there anything cheap anymore?

I think given all the hype and dollars chasing the EV space that the best opportunities are in components for lithium ion batteries. Full disclosure, I am long one of my favorite names in the space; American Battery Tech (ABML). They recycle lithium and repurpose the lithium, cobalt and nickel from used batteries and do so without the brute force and heat that China uses to accomplish this. I also like ALB, LAC and PLL as plays to be in the cat bird’s seat for the massive demand for lithium.

How do you feel about the strength of the USD and confidence in treasuries currently?

I think the dollar actually gets stronger, not weaker over time.

The reasons are that the European Union is in worse shape, China is likely to flex more, meaning they will push things in Taiwan pretty close, but not to the point of war, which will likely make investors nervous and that nervousness [will push] them into the dollar.

Does the Fed and the Biden administration have a handle on the inflation problem? Why or why not?

That’s the easiest question of all. NO!

The administration has cut pipelines like they did with XL Pipeline and then they wonder why oil producers are not producing as much? It’s crazy how the administration doesn’t recognize cause and effect. You cut leases for oil and gas, you reduce transport (pipelines) and you wonder why our prices spike? I wonder how these people even tie their shoes.

This is subscriber only content. To subscribe and gain access to all my archives, as well as support my work, you can use this link for 20% off if you subscribe today: Get 20% off forever

Disclaimer: As Jon says, he is long ABML, ALB, LAC and PLL. None of this is a solicitation to buy or sell securities. Positions can always change immediately as soon as I publish this, with or without notice. You are on your own. Do not make decisions based on my blog. I exist on the fringe. The publisher does not guarantee the accuracy or completeness of the information provided in this page. These are not the opinions of any of my employers, partners, or associates. I get shit wrong a lot.