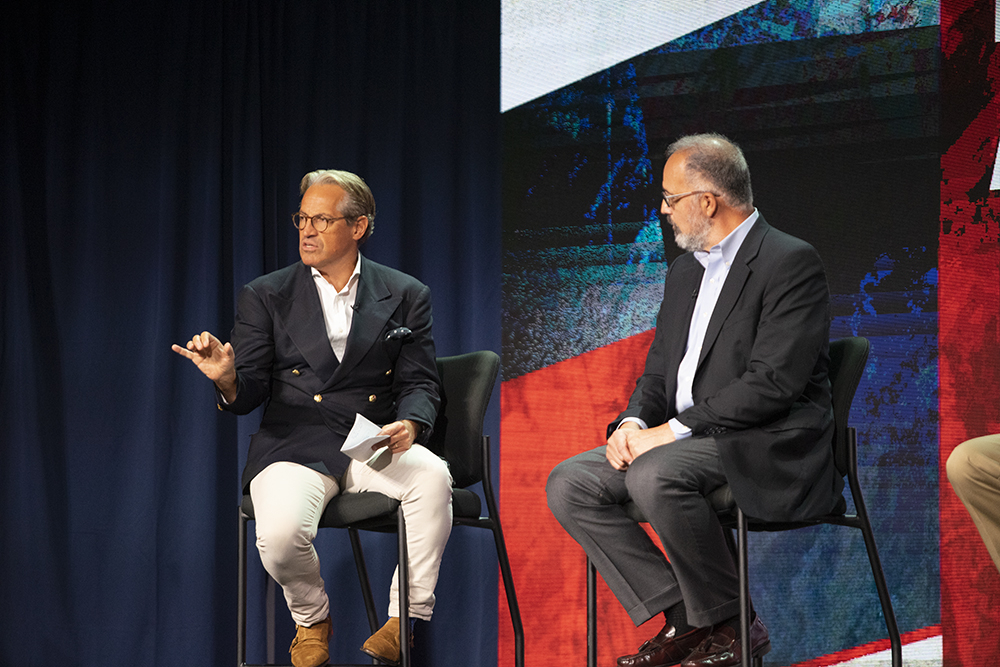 Today’s Marxism has little to do with Karl Marx. Marxism in its purest form is an attack on capitalism not culture. Once workers united against their capitalist exploiters the inevitability of Communism would be realized.

During the panel discussion that I participated in at Liberty University during the Falkirk Faith Summit with Eric Metaxas, Mark David Hall, author of Did America Have a Christian Founding, and Jay Reynolds, Senior Fellow at the Discovery Institute and co-author of Privileged Planet, we were discussing biblical worldview issues.

Dr. Reynolds mentioned Antonio Gramsci and Herbert Marcuse in passing. I’m sure most people missed the significance of his statement. But it’s Gramsci’s ideas we are seeing being worked out in our nation today, not those of Marx.

Gramsci (1891–1937) believed it was incumbent on his followers to “enter into every civil, cultural and political activity in every nation, patiently leavening them all as thoroughly as yeast leavens bread.” [1] To change the culture, Gramsci argued, “would require a ‘long march through the institutions’—the arts, cinema, theater, schools, colleges, seminaries, newspapers, magazines, and the new electronic medium [of the time], radio.” [2]

Thinking Straight in a Crooked World is a package deal. It’s a study in applied apologetics, Christian worldview, and cultural application. A great book for young and old. TSCW will prepare your children for the ideological battles that are raging around us.

Roger Kimball captures the tactic well in his book The Long March: How the Cultural Revolution of the 1960s Changed America: “The long march through the institutions signified in the words of [Herbert] Marcuse, ‘working against the established institutions while working in them’. By this means—by insinuation and infiltration rather than by confrontation—the counter-cultural dreams of radicals like Marcuse have triumphed.” [3]

Gramsci’s enemy was not capitalism. It was Christianity. Gary North explains that Gramsci believed that “the only way to achieve a proletarian revolution would be to break the faith of the masses of Western voters in Christianity and the moral system derived from Christianity.”

Christianity used to be cultural. There was a time when Christians believed that Christianity was transformative. Gramsci understood this.

Last week, after a discussion with a friend who I had not seen in 32 years, I began rereading James Orr’s book The Progress of Dogma, a series of lectures that he delivered at the Western Theological Seminary [4] in Pittsburgh, PA, in 1897.

Orr sounds very much like Gramsci, but with a twist. He believed that Christians should engage the culture at every level. The following is from the last few pages of of his book The Progress of Dogma . Note the bold text below.

I trust, that, as the result of this survey in which we have been engaged, I have succeeded in some degree in making it apparent that there is a true meaning and progress in the history of dogma, and that some glimpse even has been obtained into the law of that progress. I close by reiterating my conviction that the outlook in theology, if not all bright, is assuredly not all dark. There are, indeed, not wanting signs that we are on the eve of new conflicts, in which new solvents will be applied to Christian doctrines, and which may prove anxious and testing to many who do not realise that Christian faith in every age must be a battle. That battle will have to be fought, if I mistake not, in the first instance, round the fortress of the worth and authority of Holy Scripture.

A doctrine of Scripture adapted to the needs of the hour in harmonising the demands at once of science and of faith, is perhaps the most clamant want at present in theology. But the whole conception of Christianity will get drawn in, and many of the old controversies will be revived in new forms. On the other hand I see many things yielding encouragement the serious attention being given to the problems of religion; the recognition of Christ as Master and Lord even by those who do not admit to the full His supernatural Person and claims; the earnest temper of the age, and its desire to reach the truth in all departments of inquiry; the searching light cast on documents and institutions, which can only result in that which is of abiding value receiving suitable acknowledgment.

A constructive period may confidently be expected to follow the present season of criticism and testing of foundations, and then will be witnessed the rearing of a grander and stronger edifice of theology than the ages have yet seen. If, however, I were asked in what I think the distinctive peculiarity of twentieth-century Christianity will lie, I should answer that it is not in any new or overwhelmingly brilliant discovery in theology that I look for it. The lines of essential doctrine are by this time well and surely established. But the Church has another and yet more difficult task before it, if it is to retain its ascendency over the minds of men.

That task is to bring Christianity to bear as an applied power on the life and conditions of society; to set itself as it has never yet done to master the meaning of “the mind of Christ,” and to achieve the translation of that mind into the whole practical life of the age into laws, institutions, commerce, literature, art; into domestic, civic, social, and political relations; into national and international doings in this sense to bring in the Kingdom of God among men. I look to the twentieth century to be an era of Christian Ethic even more than of Christian Theology. With God on our side, history behind us, and the unchanging needs of the human heart to appeal to, we need tremble for the future of neither.

“All flesh is as grass, and all the glory thereof as the flower of the grass. The grass withereth, and the flower falleth; but the word of the Lord abideth forever. And this is the word of good tidings which was preached unto you.” [1 Pet. 1:24–25] (352–354)