Authored by Darlene McCormack Sanchez via The Epoch Times,

Outside a drag bingo event hosted by a pro-LGBT church in Texas, a microcosm of America’s culture war played out with liberals and conservatives screaming at each other across a boulevard on Saturday. 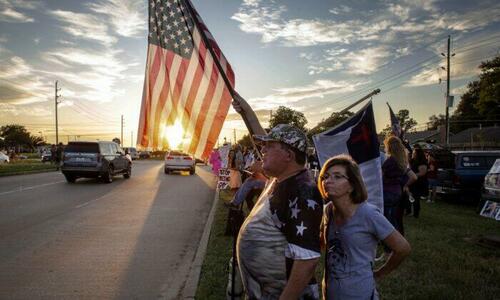 About 300 Texas conservatives lined an entire block to protest the First Christian Church in Katy, which sponsored a sold-out family drag bingo event to raise money to benefit its “Transparent Closet.”

The clothing boutique was for “trans and exploring teens, youth and young adults,” according to the church’s website. Its parking lot was full of cars as the family drag bingo event started around 5 p.m. The adults-only portion of the drag show was scheduled for 8:30 p.m.

The conservative crowd dwarfed some 100 liberals who showed up to champion the church, which openly supports LGBT people. Protesters and counter-protesters alike were armed.

Extremist groups from both sides of the political spectrum showed up, including far-left Antifa members dressed in black from head to toe carrying umbrellas, few members of neo-Nazi groups, and the Proud Boys, a pro-Western fraternal organization who were wearing Buc-ee’s masks.

The Antifa and Proud Boys groups taunted each other as sheriff’s deputies donning helmets and riot gear straddled the boulevard to separate them.

At one point, the factions clashed with an Antifa member hitting a Proud Boy over the head with a flag pole. Other Proud Boys ran to confront the Antifa members, launching a pepper spray attack. 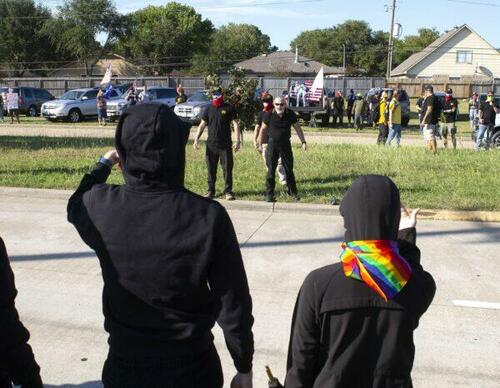 Christian songs played over loudspeakers as cars and trucks with American flags cruised the boulevard honking their support. People knelt in the grass to pray.

On the liberal side of the road, the new Little Mermaid song blared in the background.

Overhead, a helicopter circled the spectacle.

Loriann Belin, from the Houston area County Citizens Defending Freedom group, showed up to fight the sexualization of children.

“We need to stand for the protection of the most vulnerable among us—our children,” she said.

“We don’t hate those people on the other side. God loves them. They’re just lost and need Jesus,” Belin added.

Fabiana Pimentel, an immigrant mother with children enrolled in the Katy Independent School District, said she left Brazil 14 years ago and can’t believe what is happening in America.

During the pandemic, she grew concerned about what her children were learning in the classroom and reading in school libraries.

“I realized things are worse than I thought,” she said. “I’m against the sexualization of kids.”

“My granddaughter is 13 years old, and she wants to be a boy now,” Harmier said, adding she cut off all her hair and avoids her father because he isn’t on board with her desire to transition.

“We’ve got to stop this,” he said. “You shouldn’t be free to indoctrinate children.” 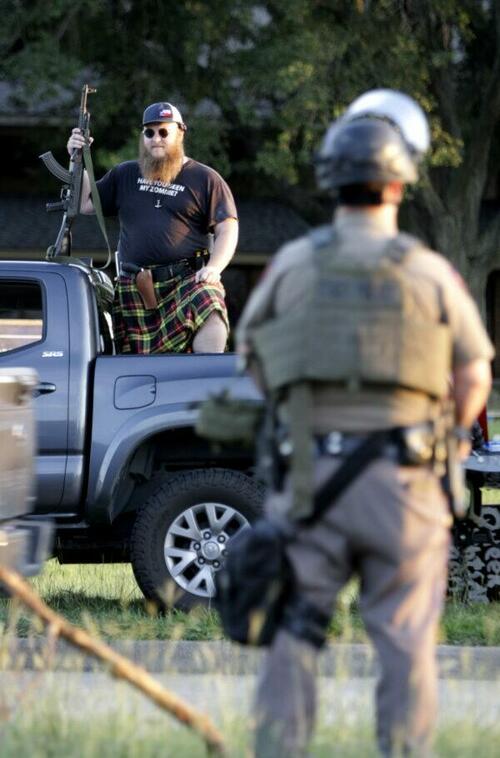 A Texas Department of Public Safety trooper stands in the middle of a boulevard to keep drag bingo protestors separated A man holding a rifle stood guard over LGBT supporters on Sept. 24, 2022. (Bobby Sanchez/The Epoch Times)

Across the boulevard, liberals dressed in rainbow T-shirts were just as passionate, chanting, “Fascists, go home!”

A Katy woman on the liberal side said it was a shame people were protesting drag queens, so she came out to support the church.

“To make sure the people attending tonight are safe,” said the woman, who declined to give her name.

Another woman wearing a multicolored shirt watched the crowd from the liberal side. She was with a veteran group that was “for everybody’s rights,” including the LGTB community.

Further down, a man with graying hair dressed in black said he was an anti-fascist who came to counter Kelly Neidert, pointing a finger toward a group of conservatives across the boulevard. 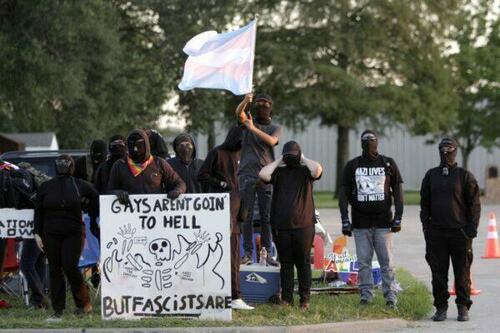 Neidert, wearing a red Trump hat, said Antifa follows her around Texas, harassing her because she hosted conservative events at the University of North Texas as a student.

She is the founder of Protect Texas Kids and wanted to attend the protest also to draw attention to the sexualization of children.

On Twitter, a post by the Screwston Anti-Fascist Committee labeled all the parent groups attending as “fascists” who intended to disrupt a drag bingo event. “Nazi groups such as the Aryan Freedom Network plan to attend,” the post said.

The post included a flier targeting Kelly Neidert, urging members to “mask up and bring a buddy.”

“Join us in the streets to defend the queer community against this threat!” the flier said.

The drag bingo event at First Christian Church, part of the Disciples of Christ denomination, drew more controversy after the church quietly dropped one drag performer, Jaysen Kettl, who was once involved in a school shooting plot.

Kettl goes by the stage name of Tisha Flowers and portrays himself as a Goth drag queen.

In 2004, Kettl, 17 at the time, pleaded guilty to conspiracy to commit capital murder for his role in plotting a school shooting at Vidor High School. The plot was foiled before anything occurred.