It’s amazing what happens when you stop forcing people to wear masks.

After several years where in-air confrontations and unruly passengers became the norm for air travel, with most disputes arising over people wearing or not wearing masks, incidents have started to level off now that masks are no longer required.

It’s almost as if people don’t like being micromanaged…

The unruly passenger rate has fallen for the second week in a row, Bloomberg noted this morning, following the April 18 decision by a judge to end mask mandates on U.S. airlines and mass transportation. 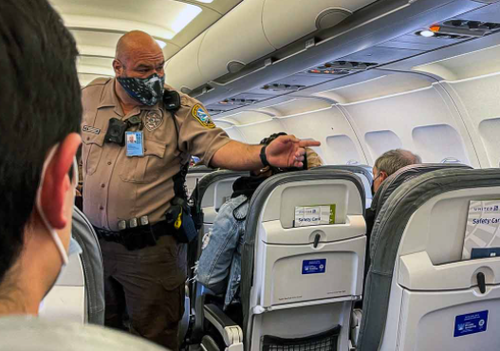 The FAA reported 2.1 unruly incidents per 10,000 flights in week ending May 1, Bloomberg reported. This is the lowest rate since cases started surging in early 2021 with, again, a “majority” of those cases related to the federal mask mandate.

Remember back in February we noted that unruly incidents had hit 27 year highs. At the time Delta Airlines CEO Ed Bastian had officially asked the Biden DOJ to help deter aggressive behavior on flights, telling AG Merrick Garland that a no-fly list “will help prevent future incidents and serve as a strong symbol of the consequences of not complying with crew member instructions on commercial aircraft.”

We noted that last year, 72% of the 5,981 reports of pandemic-era passenger incidents were related to masks according to the FAA, which launched investigations into more than 1,105 more serious incidents in 2021 – over 3x the previous high since the agency began collecting data in 1995.

According to Transportation Secretary Pete Buttigieg, a unified no-fly list was being considered at the time.