Something curious took place a month ago during Powell’s semi-annual testimony before a (still-Democrat controlled) Congress: whereas it was quite clear that Biden was calling Powell and demanding an end to inflation (which the White House had unleashed with its trillions in stimmies), most other vocal Democrats, and especially the progressives, were warning the Fed Chair that there is hell to pay if the Fed’s hikes push the economy into recession.

“What’s worse than high inflation and low unemployment?” asked Senator Elizabeth Warren as the Fed chief gave congressional testimony last month. “It’s high inflation and a recession with millions of people out of work…. I hope you’ll reconsider that,” she added, “before you drive this economy off a cliff.”

Which is funny, because in recent days Biden – who was adamant in “explaining” that the soaring inflation of 2022 was out of his control and was solely “Putin’s price hikes” – has been taking credit for the modest dip in gasoline prices thanks to the most grotesque abuse of a Y-axis in history…

Gas prices are declining at one of the fastest rates we have seen in over a decade – we’re not letting up on our work to lower costs even further. pic.twitter.com/suEKuKXyKP

… even though as we have repeatedly made it clear the only reason any commodity prices are low, and that includes oil and gas, is because most now see a recession as inevitable… 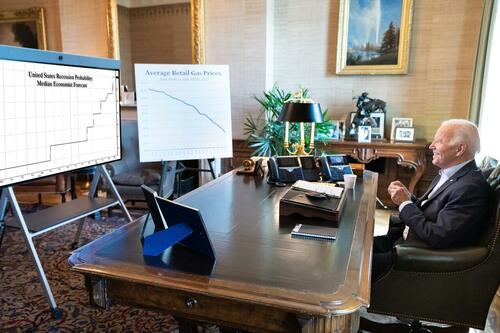 … and yes, while gasoline prices will certainly drop during the coming recession (however briefly), it is absolutely certain that millions of people will also lose their jobs thanks to the Powell-induced recession.

Which takes us to the main event this week, when still scorching price pressures will push the Fed to raise interest rates 75 basis points on Wednesday for the second straight month at which point the economy is expected to finally crack, and as even as Bloomberg now admits catching up to what we said months ago, “the tougher it acts, the harder it gets to avoid a sharp increase in unemployment and the subsequent political fallout.”

“There has been more than enough blame for inflation to go around,” said Mark Spindel, chief investment officer for MBB Capital Partners LLC. If unemployment rises, “constituents will scream and senators and House members will have to deflect blame, and that will find its way to Jay Powell.”

Powell, of course, has a dual mandate from Congress for maximum employment and price stability, and has already repeatedly admitted he got the inflation call wrong last year and were slow to react, making him a willing scapegoat for what comes next.

And what comes next is simple: with Democrats facing catastrophic losses in the November midterm elections from voters furious over Biden’s (not Putin’s) inflation, some are starting to warn Powell to expect consequences if rising joblessness is the cost of a Fed error. Which it already is as we recently reported and as even Goldman has admitted.

To be sure, the economy still looks in reasonable shape with unemployment near a 50-year low of 3.6%, although those are deeply lagging indicators, especially when lipsticked over with the BLS’ increasingly more grotesque seasonal adjustments- leading and concurrent indicators confirm the labor market has already snapped; indeed, critics told Bloomberg a recession will be hard to avoid over the coming year, and the path to a soft landing is getting narrower as the Fed steps up the pace of rate increases.

Senator Mark Warner, a Virginia Democrat on the Banking Committee, didn’t favor a formal review of the Fed’s performance on inflation but did say that it was clear in hindsight that mistakes had been made.

“I think history will look back and say we had way too easy a money policy for way too long,” he told Bloomberg although he certainly didn’t complain when policy was too easy yet inflation remained low and when all the clueless hacks – such as fax and internet expert Paul Krugman – were saying it was transitory. It much “easier” to complain now that inflation is on the verge of prefixes such as “hyper.”

A key question is how entrenched inflation has become. The latest read on consumer prices, which rose 9.1% in the year through June, is not encouraging. Fed officials forecast moderating growth with inflation declining over the next two years with little cost to jobs.

But as with every Fed forecast, that one too is garbage and at best wishful thinking, say some economists, because it hinges on the public being convinced that price pressures will ease in the future, and that supply tangles will unravel.

Matthew Luzzetti, chief U.S. economist at Deutsche Bank, says the Fed is going to have to brake the economy much harder to get inflation down to its 2% goal. (The Fed targets a different price gauge whose latest reading was 6.3%.)

“Simply getting relief on the supply side, isn’t enough” to return inflation back to 2%, said Luzzetti. “You need to impact demand materially.”

Bloomberg Economics also estimates the unemployment rate will peak around 5% in this Fed tightening cycle; meanwhile the odds of a recession according to the median forecast- which exclude such outliers as Deutsche and Bank of America, both of which have made a recession their base case – are approaching 50%. 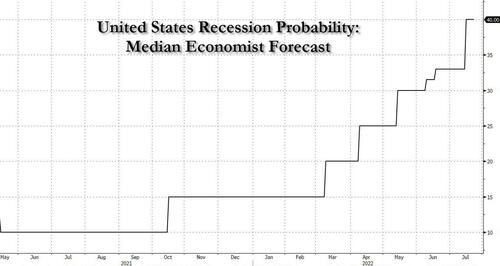 “Even a shallow recession can lead to the unemployment rate jumping by 2 percentage points,” said Anna Wong, chief U.S. economist for Bloomberg Econ.

“They need to see clear and convincing evidence that inflation is coming down,” she added. By the time that happens, “we will be in a recession.”

Which means that in the next few weeks, Powell will transform from every Democrat’s best friend (for launching of that socialist wet dream, MMT or the Magic Money Tree), to their most loathed enemy – after all, someone else has to be responsible for the catastrophic governance under Democratic leadership.

It’s already starting: while Senate Baking Committee Chair Sherrod Brown, an Ohio Democrat, defended Powell during an interview on Bloomberg Television Thursday, some other prominent Democrats on the committee, which oversees the central bank, voted against Powell’s second term, including Warren and Robert Menendez of New Jersey.

“It is important for the Fed not to overreach and trigger a recession unnecessarily, as part of its effort to bring inflation down,” said Representative Hakeem Jeffries of New York, the No. 5-ranked House Democratic leader. “Inflation is a global problem, and is actually not as bad in America as it is in almost every other developed economy in the world,” he told Bloomberg.

Meanwhile, even as most Republicans still mostly blame Biden for stoking inflation by going too big with pandemic aid last year, some are also taking aim at the Fed and are vexed by its lack of transparency. North Carolina Republican Senator Thom Tillis discussed the committee’s frustration last month, pointing out that both sides of the aisle have struggled to get information out of the Fed. His colleague Patrick Toomey, a Pennsylvania Republican, is preparing legislation aimed at making the Fed’s 12 regional branches more accountable.

Powell has worked hard to restore relations with Congress after the rocky tenures of former Chairs Ben Bernanke and Janet Yellen. He also launched his own effort at community outreach called “Fed Listens.” There have been three sessions this year.

But none of this will assuage lawmakers if unemployment goes up because – as Bloomberg correctly writes – in Washington “somebody needs to bear the cost of policy failure.”

“Lawmakers — especially Democrats — are more prone to threaten the Fed with legislation as unemployment rises,” said Sarah Binder, a senior fellow at the Brookings Institution. “Both rising inflation and unemployment drive down public approval of the Fed, but job losses have a larger effect.”