By Jan Nieuwenhuijs of Gainesville Coins

Late 2021 the central bank of Denmark released a bar list of its monetary gold. Unfortunately, the individual serial numbers of the ingots—the disclosing of which is the main purpose of a bar list—are missing. Government entities around the world have been increasing transparency regarding gold in recent years, but still have a long way to go.

A central bank’s monetary gold can be viewed as its “Plan B.” If, for example, a central bank fails to control price stability through monetary policy (“Plan A”), it can peg its currency to gold to restore stability.

Gold is a sensitive topic, though. On one hand, a central bank needs gold reserves to underpin confidence in its balance sheet. Especially central banks that issue reserve currencies. On the other hand, if a central bank emphasizes gold too much, it could destabilize Plan A.

Central banks have a hard time finding a balance in how transparent to be about gold. Since 2008 the trend is more transparency, but not too quick. The following are examples of government bodies having increased gold transparency in the past fourteen years:

In October 2021 the Danish central bank released a report titled “Danmarks Nationalbank’s gold – a historical overview.” The report includes an historical background of the Danish gold, its storage locations since the Second World War, and how much was lent. 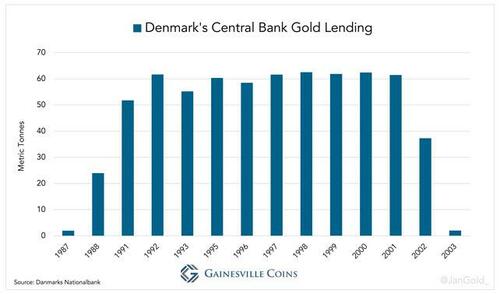 According to the report, Danmarks Nationalbank investigated to repatriate gold from London in 2010. It was decided not to repatriate “for the time being.”

We Need Full Transparency Regarding Gold

The gold report by Danmarks Nationalbank also covers “issues relating to … control and auditing of the gold stock.” In addition, a gold bar list was published. From the report:

“After the Bank of England opened up the possibility of inspection visits, Danmarks Nationalbank carried out physical inspections in 2014 and 2018 at the Bank of England, where samples of the gold stock were checked. The registration numbers and purity of the sample of gold bars were checked by reading the stamp on the gold bars, which were also weight checked and ultrasound scanned. Ultrasound scanning is used to check that the individual gold bar is made of the same material throughout. The inspections did not give rise to any comments.”

In the end the Danish taxpayers are the “shareholders” of Denmark’s central bank and the ultimate owners of its gold reserves. Danmarks Nationalbank is the custodian of the gold, which hires the BOE as a sub-custodian. In Danmarks Nationalbank’s Annual Report 2021 PricewaterhouseCoopers (PwC) shares its responsibility:

I don’t know if PwC has physically verified gold at the BOE, but let’s assume the audit has been done as it should be.

Now, about the bar list published by Danmarks Nationalbank, which doesn’t include serial numbers. The Good Delivery Rules for Gold and Silver Bars by the London Bullion Market Association (LBMA) prescribes a gold bar list to include a bar’s serial number, brand code, gross weight, assay, and fine weight. See below.

Danmarks Nationalbank must be in possession of such a bar list. On BOE’s website we read: “We only accept bars which comply with LBMA Good Delivery standards.” And the serial numbers of Good Delivery bars are documented by the BOE for its clients based on LBMA rules (see above).

Additionally, in the report it reads that Danmarks Nationalbank carried out physical inspections by comparing the “registration numbers [serial numbers on a list] … of gold bars” with the stamps on the gold bars.

If all central banks that store gold at the BOE—such as the central banks of Denmark, Australia, the Netherlands, Belgium, Germany, Finland, Italy, Portugal, Austria, Sweden, Switzerland, Romania, Poland, Japan, South Korea, and India—would publish a proper bar list, anyone can check if bars are listed twice. Next, the central banks should physically inspect their gold with independent auditors. This procedure would award full credibility for central banks. Credibility that might come in handy down the road.

To my knowledge only Mexico makes use of BOE storage facilities and has published a gold bar list with serial numbers. The gold bar list of the U.S. adheres to industry standards, but the Americans have no gold stored in London. The bar lists released of late by Denmark, Germany and Australia are next to worthless.

If Mexico can publish a proper gold bar list, why can’t others?