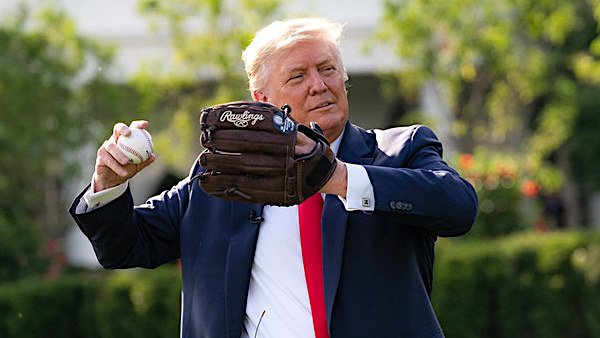 A famed liberal legal expert is warning that Democrats are going too far in their attempt to get President Trump.

Many critics of the leftists’ agenda describe the current partisan Jan. 6 committee set up by House Speaker Nancy Pelosi – including two Republicans she hand-picked for their opposition to Trump – regard it as Pelosi’s third attempt to impeach and remove Trump.

Her first attempt, while Trump was in office, failed spectacularly.

Her second attempt, which actually happened after he had finished his term, also failed easily.

Now, her critics contend the current theatrical staging of one-sided testimony is simply an effort to prevent Trump from running in 2024.

It is Alan Dershowitz, professor emeritus at Harvard Law School, who warned about how far Democrats are going.

“The thing most upsetting to me as a liberal Democrat and civil libertarian is how hard they’re searching for a crime,” Dershowitz told Just the News in an exclusive interview. “It reminds me of [former head of the Soviet secret police] Lavrentiy Beria saying to Josef Stalin, ‘Show me the man, and I’ll show you the crime.'” He cited some of the wilder claims being made against Trump, including that he attempted to murder former Vice President Mike Pence to claiming he’s guilty of dereliction of duty.

All those claims and many more have been made in trying to find some ground on which to charge him for the riot at the Capitol on Jan. 6, 2021.

In fact, he authorized thousands of troops to be available to prevent that very riot, and it was Democrats in Congress and in Washington, D.C., who refused to allow them to protect the Capitol.

Dershowitz said all the claims have one thing in common: “They stretch the law however it needs to be stretched in order to get Trump.

“Today they’re targeting Trump. Tomorrow it could be Black Lives Matter, or union organizers, or even a progressive president when the roles are flipped.”

Dershowitz explained Democrats aren’t following the law, but instead are “twisting” the law in the hope of seeing a charge brought against Trump, the report explained.

“Dershowitz’s comments came a few days after the Washington Post reported the Justice Department is investigating Trump’s actions as part of its criminal probe into the storming of the Capitol and efforts to challenge the 2020 election results,” the report aid.

Nearly 900 people have been arrested by federal authorities for the events that day, and many have been held since then without trial.

“The vast majority weren’t accused of carrying a weapon, assaulting law enforcement, or destroying property. Many didn’t even enter the Capitol building,” the report pointed out.

But Pelosi’s committee has presented one side of the case to try to portray Trump as responsible for everything that happened that day.

Members of Congress holding their “show trial” of Trump likely will refer Trump to the Justice Department for charges, but Dershowitz said even that may not do what Democrats want.

“The Justice Department will totally ignore any conclusions reached by the House committee,” he said. “There was no cross examination … It was a corrupt process for eliciting evidence. Never before have we seen a hearing like this where the other side was excluded and we only got a one-sided story.”

He said the DOJ would take up the case only if there’s “a smoking gun that would be accepted by the vast majority of Americans.”

The Democrats’ problem so far is that there’s “no gun, not even a knife, just circumstantial inferences,” he said.

The post Dershowitz: Dems ‘stretching the law’ in their attempt to burn Trump appeared first on WND.