For the past month and a half, the international community has watched in horror as India has suffered from one of the world’s deadliest national outbreaks of COVID-19, provoked in part by a prime minister who held massive political rallies, and allowed massive gatherings for the celebration of Hindu religious holidays, gatherings that epidemiologists say helped seed the latest outbreak.

Even as the US and Europe have sent vaccines, medicine, oxygen tanks and other supplies, the government has refused to impose more restrictive measures, and the number of daily deaths has continued to accelerate. 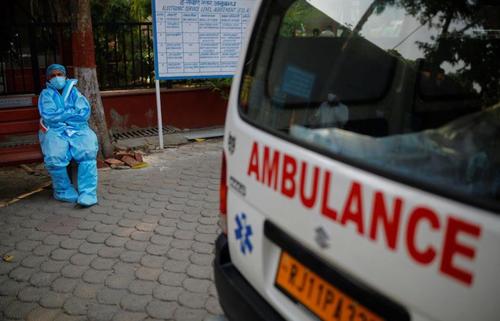 The number of deaths eclipsed 4K on Thursday, topping that level for the second day in a row, as hundreds of patients succumbed to the disease while waiting in ambulances and cars in lengthy queues stretching from the nation’s overrun hospitals.

As doctors search for alternatives to remedies like Gilead’s remdesevir, a recent Reuters report highlighted just how desperate communities have become to protect against the virus. The situation is so dire, a small number of communities have embraced the unconventional strategy of dosing their populations with anti-malarial drugs to protect against COVID-19 – even though anti-malarial treatments like hydroxychloroquine supposedly don’t function as a COVID-19 prophylactic (that is, according to certain studies widely cited by the medical establishment. Others suggest that the strategies being used by these communities just might work).

Reuters reports that at least two Indian states have said they plan to dose their populations with the anti-parasitic drug ivermectin to protect against severe COVID-19 infections. And they’re moving ahead with this plan despite the WHO’s statement in late March that the current evidence is “inconclusive”.

The move by the coastal state of Goa and northern state of Uttarakhand, come despite the World Health Organization and others warning against such measures.

“The current evidence on the use of ivermectin to treat COVID-19 patients is inconclusive,” WHO said in a statement in late March. “Until more data is available, WHO recommends that the drug only be used within clinical trials.”

Merck, a manufacturer of the drug, has also said available data does not support using the drug as a COVID-19 treatment

“We do not have enough data to support its use,” said Anita Mathew, an infectious diseases expert in Mumbai.

The state of Goa, a major tourist haven, said earlier this week it plans to give ivermectin to all those older than 18, while the Himalayan state of Uttarakhand announced plans on Wednesday to distribute the tablets to any person over the age of two, except for pregnant and lactating women.

“An expert medical panel has recommended this” Uttarakhand’s Chief Secretary Om Prakash told Reuters. “We are waiting for supplies to come in. Once they do we will distribute this drug.”

Uttarakhand state in March and April played host to the Kumbh Mela, a weeks-long Hindu gathering that attracted millions of devotees from across the country. Images of the gathering showed scant evidence of any mask wearing or social distancing as throngs of people congregated for a holy dip in the river Ganges.

The state, ruled by Indian Prime Minister Narendra Modi’s Bharatiya Janata Party, has since early April seen its COVID-19 cases surge from under 300 a day to above 7,000 a day and the death toll has also risen sharply.

One local health official rattled off some evidence that the population-wide dosing might help ameliorate the impact of the pandemic.

Goa Health Minister Vishwajit Rane said an expert panel based in Europe had found the drug ivermectin reduced the time to recovery and risk of death, but regulators such as WHO and the U.S. Food and Drug Administration say there is little evidence of this.

The state-run Indian Council of Medical Research recommends doctors could use the drug for mild COVID-19 patients, but warns this is based on “low certainty of evidence”.

Meanwhile, India reported 362,727 new COVID-19 infections over the last 24 hours while deaths climbed by 4,120, taking the death toll to 258,317, according to health ministry data. The country’s total confirmed cases now stands at 23.7M, though many cases and deaths are believed to have gone uncounted. 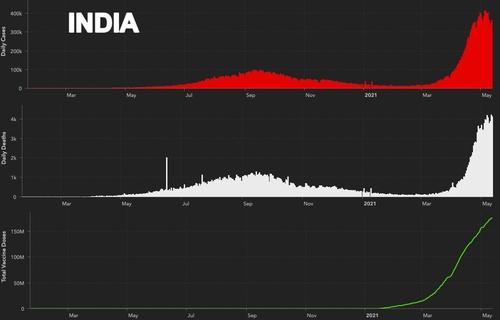 Meanwhile, the country’s vaccination rate has accelerated slightly as foreign batches arrive (and the benefits of India’s export restrictions have helped to enhance local supply).