Israeli Prime Minister Benjamin Netanyahu, who increasingly looks to be on his way out of power, said on Tuesday that’s he’s willing to worsen relations with the US under the Biden administration if it means preventing Iran from acquiring a nuclear weapon.

“An Iranian nuclear bomb is a threat for the continuation of the Zionist project and we must fight it relentlessly,” he said at a ceremony on the occasion of Israel’s new Mossad chief David Barnea taking the helm. “If we have to choose between friction with our great friend the U.S. and the elimination of this existential threat, the elimination of the threat will come first,” Netanyahu asserted.

The embattled PM’s rhetoric is turning increasingly bellicose and some might say desperate at a moment eleven days of fighting just wrapped up in Gaza under a tenuous ceasefire deal, and as Iran is in the midst of the fifth and final round of talks with world powers in Vienna which seek restoration of the JCPOA nuclear deal. Perhaps even more impactful and driving Netanyahu’s seeming desperation is that the country is on the cusp of seeing its first government in 12 years formed without Bibi as leader. 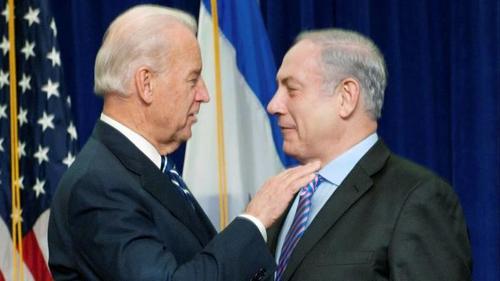 This after the Sunday night political shocker wherein his longtime close ally Naftali Bennett of the Yamina party (and now likely next PM) announced plans to align with Lapid to oust Netanyahu (which swiftly led Netanyahu’s supporters to brand Bennett a “traitor”). But the man who consistently ran on a national security platform based on greatly hyping threats to the Jewish state’s survival has himself long survived many near-misses politically over the past decade in power.

“I’ve told this to my friend for 40 years, Joe Biden, and I said to him, ‘With or without a deal, we will continue to do everything in our power to thwart the armament of Iran with nuclear weapons,’” Netanyahu continued in is Tuesday remarks.

And here’s more on the speech from Axios, particularly words which suggest Netanyahu is ready to go so far as ordering a preemptive attack on Iran should a ‘bad deal’ be announced from Vienna:

He stressed that he told President Biden Israel would continue its efforts to prevent Iran from obtaining the bomb with or without a nuclear deal. “Containment is not an option,” Netanyahu said.

Over the past month there’s been delegations sent from Tel Aviv to Washington to try and convince the Biden White House against leaving Israel out in the cold (as Tel Aviv sees it). The admin has meanwhile sought to assure its closest Mideast ally that it will be consulted and its concerns taken into account before anything final is reached.

Israel is also expected to press Washington on a proposed $1 billion in emergency aid package following the eleven-day Gaza war, and to rapidly replenish the costly Iron Dome defense system.

Work harder: Millions of Israelis on welfare are depending on you https://t.co/MCyuclZphc

The next major meeting is planned for Thursday between Israeli Defense Minister Benny Gantz and Secretary of Defense Lloyd Austin.