Remember when Deutsche Bank was the butt of every investment banking liquidity joke on the street just a couple years ago? Well, thanks to Bill Hwang, that ridicule has now been turned toward Credit Suisse while, at the same time behind the scenes, Deutsche Bank has apparently been putting together some wins.

Today, the investment bank is benefitting to the tune of “almost $1 billion” on a 35 year old trader’s bet on shipping company Zim Integrated Shipping Services, according to Bloomberg.

The trade on the world’s 11th-largest container shipping carrier could net Deutsche its biggest win since its “big short” trade during the global financial crisis, the report notes.

Deutsche had been betting on bonds and bank loans of Zims that had been trading at a large discount as far back as 2016. The bank also took a small slice of equity in the name. Since then, shipping rates have skyrocketed and the investment has been such a success, it could make up “about a quarter of [Deutsche Bank’s] 2020 investment banking profit”.

Trader Mark Spehn starting putting on the position when he joined the bank from SC Lowy. Zim was in the midst of emerging from a debt restructuring that took place in 2014. As a result, the company had less debt and had diluted its equity. But over the coming years, shipping rates remained depressed, making it difficult for shippers make up ground. 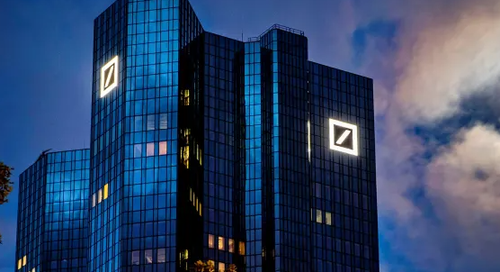 Meanwhile, Spehn made Zim his top conviction trade, convinced there would be industry consolidation and an eventual leaner and meaning company emerging as a result. With rates staying low, he tried to lure others into his bet, but found little success.

That has all changed now. Shipping rates have started to skyrocket this year as a result of continued demand in the U.S. and Europe, mixed with new carbon emission standards. Supply chain and shipping bottlenecks are a way of life as global economy adapts to the ongoing post-Covid recovery. The Shanghai Containerized Freight Index is up 265% over the last year, Bloomberg notes.

Deutsche has started to ring the register on its trade, selling about $90 million in stock on June 4. It still has a stake of about $645 million after the sale. Debt the company owed was redeemed at face value. Zim equity is up over 400% over the last 12 months.

Ofer, who has been helping Zim financially for the last decade, has also benefited from the trade. Firms King Street Capital Management and Davidson Kempner Capital also had exposure to the restructuring.

Deepak Natarajan, managing director at King Street, concluded: “It was important for us to monetize a decent portion of our position just because the liquidity of the equity is relatively low. We are still relatively constructive on freight rates in the next six to 12 months.”