Short-term rates moved sharply higher after last week’s technical tweak by the Fed which pushed the IOER and RRP by 5bps to 15 and 5bps respectively, which had a downstream effect on all short-term yields, and today’s 2Y auction was a case in point printing at 0.249%, the highest yield since March 2020 and a 0.5bps tail to the When Issued 0.244%. This was the biggest tail on the 2Y since July 2020 when the auction tailed 0.9bps. 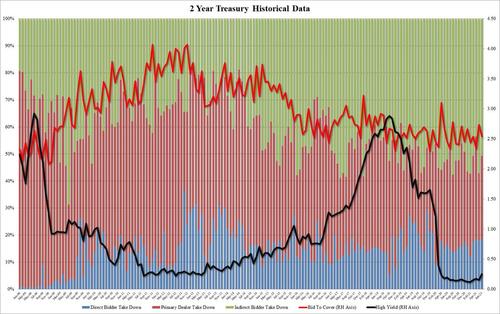 And while the auction was superficially disappointing, it could have been worse amid expectations that the large move higher in 2yr yields post-Fed, both as a result of the more aggressive rate hike pricing by markets and the IOER/RRP hike, would entice investors due to the new and improved carry profile of the note. However, as Newsquawk notes, it’s worth noting that 2s had been grinding higher earlier in the session, likely reducing the allure somewhat by the time of the auction.

Bottom line: not a pretty auction, but it could have been far worse all things considered.