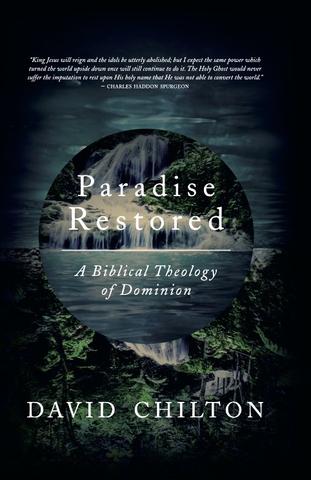 The following article, Does 2 Thessalonians 1 Support Amillennialism?, was first published on The American Vision.

Vern Poythress wrote “2 Thessalonians 1 Supports Amillennialism.” It was originally published in THE JOURNAL OF THE EVANGELICAL THEOLOGICAL SOCIETY in 1995. The following is from the Abstract of the article:

I’m only interested in Poythress’ interaction with postmillennialism. By answering it, the other positions are answered. I appreciate the fact that Poythress interacts with David Chilton’s work on the subject with actual quotations from Chilton’s book Paradise Restored. Not everyone follows this proper methodology:

According to David Chilton and some other contemporary postmillennialists, not only 2 Thessalonians but most of the other NT passages that have traditionally been understood as describing the Second Coming are in fact describing the fall of Jerusalem in 70 A.D. The language is figurative rather than literal.

The above assessment of Chilton is accurate. Then there’s this from Poythress:

Actually, Paul was not talking about the Second Coming as the phrase is normally understood. He was describing events that were on the prophetic horizon for the Thessalonians and the nation of Israel. Poythress quotes Chilton on this point:

Clearly, Paul is not talking about Christ’s final coming at the end of the world, for the coming “tribulation” and “vengeance” were specifically aimed at those who were persecuting the Thessalonian Christians of the first generation. The coming day of judgment was not something thousands of years away. [1]

Paradise Restored has helped to bring about a massive paradigm shift in the Evangelical and Reformed world from abject pessimism to unabashed optimism. The rea­sons are simple enough: this classic work is forthrightly biblical in explaining a proper way to interpret Bible prophecy. It is masterfully written, clear, and powerfully persuasive. This new edition has been re-typeset with multiple indexes. It will help a whole new generation grasp how deep, how wide, how strong, and how certain is the finished work of redemption in Jesus Christ.

This is not an off-hand remark without context. Chilton’s further comments on this subject are worth reading. I suggest that the reader purchase a copy of Paradise Restored for the Thessalonian context and other relevant passages to the topic.

Jesus said something similar during His earthly ministry:

For the Son of Man is going to come in the glory of His Father with His angels and WILL THEN REPAY EVERY MAN ACCORDING TO HIS DEEDS. Truly I say to you, there are some of those who are standing here who will not taste death until they see the Son of Man coming in His kingdom” (Matt. 16:27–28; also 2 Thess. 1:7; Jude 14–15).

In what way did the Lord literally come “with many thousands of His holy ones, to execute judgment upon all the ungodly of all their ungodly deeds which they have done in an ungodly way…”? (Jude 15) It’s obvious that Jude is not describing some distant group of people: “These men are those who are hidden reefs in our love-feasts when they feast with you…” (Jude 12). Notice the audience context. These people were known to Jude and the recipients of his letter.

Let’s look at 2 Thessalonians 1 to identify the type of judgment, audience relevance, and the timing of the judgment and compare them with 1 Thessalonians 2:13–16.

The flaming fire reference by Paul in 2 Thessalonians 1:7 is taken from the Old Testament:

For behold, the LORD will come in fire
And His chariots like the whirlwind,
To render His anger with fury,
And His rebuke with flames of fire.

Why was this fiery judgment called for? The religious leaders brought this judgment down on themselves when they were given the choice by Pilate to release Jesus. “Let Him be crucified! … Let Him be crucified! … His blood be on us , and on our children!” (Matt. 27:22–25). As the capstone of their self-malediction was their acknowledgment that Caesar was their king (John 19:15).

To whom is Paul addressing the coming wrath? The Thessalonians. Paul mentions their perseverance and all their persecutions and afflictions (θλίψεσιν/tribulations) that they are enduring (2 Thess. 1:4). Their suffering is “worthy of the kingdom of God” (v. 5). Why were the Thessalonians suffering tribulation? Paul tells us:

For after all it is only just for God to repay with affliction those who afflict you,  and to give relief to you who are afflicted and to us as well when the Lord Jesus will be revealed from heaven with His mighty angels in flaming fire, dealing out retribution to those who do not know God and to those who do not obey the gospel of our Lord Jesus. These will pay the penalty of eternal destruction, away from the presence of the Lord and from the glory of His power, when He comes to be glorified in His saints on that day, and to be marveled at among all who have believed—for our testimony to you was believed (vv. 6–10).

Paul is not describing some distant future end-time event. He is explaining the coming conflagration (Matt. 22:1–8) and judgment surrounding the destruction of Jerusalem that Jesus describes in the Olivet Discourse that would happen before their generation their generation passed away (Matt. 24; Mark 13; Luke 21).

Some Thessalonian Jews had attacked Paul and Silas for their presentation of the gospel after they spent three Sabbaths reasoning with the Jews from the Scriptures (Acts 17:1–3). While some were persuaded, others attacked them:

But the Jews, becoming jealous and taking along some wicked men from the market place, formed a mob and set the city in an uproar; and attacking the house of Jason, they were seeking to bring them out to the people. When they did not find them, they began dragging Jason and some brethren before the city authorities, shouting, “These men who have upset the world have come here also; and Jason has welcomed them, and they all act contrary to the decrees of Caesar, saying that there is another king, Jesus.” They stirred up the crowd and the city authorities who heard these things (Acts 17:5–8).

For you, brethren, became imitators of the churches of God in Christ Jesus that are in Judea, for you also endured the same sufferings at the hands of your own countrymen, even as they did from the Jews, who both killed the Lord Jesus and the prophets, and drove us out. They are not pleasing to God, but hostile to all men, hindering us from speaking to the Gentiles so that they may be saved; with the result that they always fill up the measure of their sins [Matt. 23:31–33; Acts 7:51]. But wrath has come upon them to the utmost (1 Thess. 2:14–16).

Again, Paul is not describing a distant end-time event. The “wrath” was near to their time from which they would be delivered (1 Thess. 1:10).

Poythress writes that 1 Thessalonians 2:16 “is a notoriously difficult and obscure verse. It may possibly refer to the fall of Jerusalem; but it may just as easily be a general reference to the hardening of the Jews, along the lines of Rom 11:8.” The verse is not at all difficult and obscure if the time and audience indicators are considered. The book of Acts is filled with examples of Jews rejecting the gospel and disputes ensued because the Gentiles were included without having to become Jews.

In Acts 15:5 certain Christian Pharisees—who supported the Judaizing wing of the church—argued that it was necessary … for Gentiles to be circumcised and “ordered to obey” …  the law of Moses in order to be saved. Luke says in 15:2 that this caused “no little dispute between Paul and Barnabas and the Judaizers…. The point is that the inclusion of the Gentiles into the promise as Gentiles severely threatened to divide the church along ethnic lines and put an end to the Jewish mission in the Diaspora (i.e., the witness to Jews living outside Palestine around the Mediterranean in cities such as Alexandria, Antioch, and Rome). (Bible.org)

Not only “may” 1 Thessalonians 2:16 “possibly refer to the fall of Jerusalem,” it does refer to it. In Romans 11, Paul is describing what was taking place in his day: “there has come at the present time a remnant according to God’s grace” (11:5). The non-remnant was given “a spirit of stupor, eyes to see not and ears to hear not” (11:8).

Peter writes about being “a partaker of the glory that is about [μελλούσης/mellousēs] to be revealed” (1 Pet. 5:1). Earlier, he had written, “the end of all things is at hand” (4:7), and “it is time for the judgment to begin with the household of God, and if it begins with us first, what will be the outcome of those who do not obey the gospel of God?” (4:17)

Poythress assumes that 2 Thessalonians is also about the second coming. He writes:

Chilton and others like him can find what they want in the Thessalonian letters only because they first read in what they afterwards read out. But their interpretations disintegrate once we try steadfastly to put ourselves in the shoes of the Thessalonian Christians. Paul only stayed in Thessalonica for a few weeks (Acts 17:1–10). Moreover, even though Paul had talked to them about the Second Coming (2 Thess 2:5), the letters show that the Thessalonian Christians were confused. They did not completely grasp even relatively basic matters of eschatology. The Thessalonians did not already have a mastery of some esoteric eschatological system.

The apostasy (verse 3) is the definite and final rejection of the true Messiah by the Jews, which might come, as the author of the Epistle to the Hebrews suggests, after a period of forty years, in which the claims of Christianity were to be presented to them even as their fathers saw the wonders of Jehovah forty years in the wilderness. The Man of Sin (verses 3, 4) is the false Messiah who will incarnate within himself all the Jewish opposition to the gospel. He will be a lawless one, working signs and deceiving, and his destruction will result in the final establishment of the Christian Church, verses 8–10. The Restrainer (verses 6, 7) is the Roman emperor as representing the restraining power of the Roman empire, holding the Jews in subjection and preventing them from illegal and destructive attacks upon the Christians. [2]

For a detailed study of 2 Thessalonians 2, see my book Last Days Madness: Obsession of the Modern Church.

Last Days Madness is a comprehensive study of Bible prophecy that includes two chapters on 2 Thessalonians 2. While the paperback edition is out of print and will be available soon, electronic versions are available for immediate download.