The Department of Justice blocked the release of hundreds of pages of ‘Russiagate’ documents that were declassified by then-president Donald Trump, who wanted to expose FBI abuses against he and his inner circle surrounding the 2016 US election and beyond. 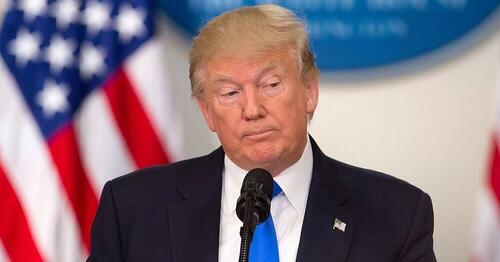 After the agency refused, citing last minute ‘privacy concerns,’ they defied a subsequent order to release the materials after redactions were made, according to Just the News, which has obtained a memo from the National Archives written by former White House Chief-of-Staff, Mark Meadows, hours before Trump left office on January 20, 2021.

Meadows’ memo confirmed prior reporting by Just the News that Trump on Jan. 19, 2021 declassified a binder of hundreds of pages of sensitive FBI documents that show how the bureau used informants and FISA warrants to spy on the Trump campaign and misled both a federal court and Congress about flaws in the evidence they offered to get approval for the investigation.

The declassified documents included transcripts of intercepts made by the FBI of Trump aides, a declassified copy of the final FISA warrant approved by an intelligence court, and the tasking orders and debriefings of the two main confidential human sources, Christopher Steele and Stefan Halper, the bureau used to investigate whether Trump had colluded with Russia to steal the 2016 election. -Just the News

Investigations into Trump and his campaign, as we know, found that there was no collusion with the Kremlin. Meanwhile, Hillary Clinton authorized the dissemination of a fabricated claim that the Trump team was communicating with a Russian bank.

The declassified documents have never seen the light of day – as the DOJ disobeyed a direct order from the sitting US president, through Meadows, to declassify and expeditiously release them after private information was redacted.

“I am returning the bulk of the binder of declassified documents to the Department of Justice (including all that appear to have a potential to raise privacy concerns) with the instruction that the Department must expeditiously conduct a Privacy Act review under the standards that the Department of Justice would normally apply, redact material appropriately, and release the remaining material with redactions applied,” wrote Meadows – who told JTN that he was dismayed at the DOJ’s refusal to follow lawful instructions from the president.

“Well, you know, the swamp is pretty deep,” he said. “But when we look at this, this particular president was all about draining the swamp, you know, and when he was running, that was more of a campaign slogan. When he got there, he realized that not only was the swamp very deep, but they they would fight back. And oftentimes he said, ‘You know, I want to do this and get this out to the American people, not just the classification in terms of issues that affected him or his campaign personally, but issues that affect the American people.”

“What would happen is he would have a directive, and then we would see, as people were leaving the Oval Office, you know, they were nodding compliance in the Oval Office, and the minute they go out, they said, ‘Well, we’re not going to do that’ or ‘We’re going to find all the reasons not to do it.’ So I found that very often while I served as chief of staff, but also found that as a member of Congress, that many times we would go in and the president was all in on a transparency issue, only to find that many, whether they be at a particular agency or the Pentagon, they started pushing back.”

According to Meadows, if the documents are ever released they’ll show that congressional Democrats and FBI leadership knew they were lying.

“We found that not only were some of the allegations made by some of the Democrats false, but they were kind of guilty of what they were accusing Donald Trump of,” he said.