Efforts To Codify Roe vs Wade Fail In The Senate

By Joseph Lord of The Epoch Times

The Senate voted on May 11 to filibuster the Democratic-sponsored Women’s Health Protection Act (WHPA), which would have codified the 1973 Roe v. Wade abortion ruling into federal law as the Supreme Court appears intent on striking down the precedent. 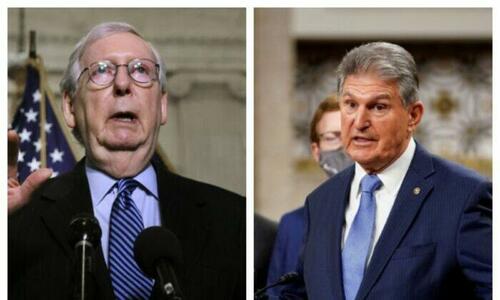 The 51–49 procedural cloture motion vote was mostly party-line, with all Republicans and Sen. Joe Manchin (D-W.Va.) voting against the measure. The measure failed as expected because Democrats didn’t meet the 60-vote filibuster threshold needed to advance the legislation in the upper chamber.

According to a draft opinion leaked to Politico and published on May 2—written by Justice Samuel Alito and confirmed as genuine by the court—a majority of the justices have agreed preliminarily to overturn Roe v. Wade.

The court hasn’t yet issued a final opinion.

Under the 1973 standard, states are prohibited from imposing restrictions on abortion in the first trimester, during which SCOTUS ruled that the mother’s right to privacy outweighed state interest in protecting life. The move effectively overturned existing abortion laws in more than two dozen states, and since then, pro-life advocates have fought to return the power to regulate abortion to the states.

Democrats decided immediately after the draft was leaked to try again on the WHPA, which the Senate failed to advance in February. A different version of the legislation was passed by the House of Representatives in September 2021 in a party-line vote, with Rep. Henry Cuellar (D-Texas), a pro-life Catholic, being the only Democrat to oppose it.

That legislation stated that abortion services are a constitutional right, as decided by SCOTUS in Roe v. Wade and that access to abortion “has been obstructed across the United States in various ways,” including by state laws.

It also stated that health care providers would be able to carry out abortions with virtually no limitations or requirements, a provision aimed at preempting new state laws, as well as superseding some current state laws restricting the procedure.

With the threat of Roe being repealed looming, Democrats tried to soften the language of the measure from its earlier form. However, given the composition of the Senate, it was never likely to pass.

In a speech prior to the vote on the legislation, Senate Majority Leader Chuck Schumer (D-N.Y.) made an impassioned plea for its passage.

“Women’s rights face their greatest threat in half a century,” Schumer said. “The legislation before this chamber is straightforward. It would codify what Americans already believe: that the right to choose whether or not to have an abortion belongs to women, not elected politicians.”

Prior to the vote, Manchin explained his reasoning for defecting from his party and voting against the legislation. The WHPA goes well beyond the bounds of Roe v. Wade, he said.

.@SenWarren: “I believe in democracy, and I don’t believe the minority should have the ability to block things that the majority wants to do. That’s not in the Constitution. […] It’s time to get rid of the filibuster.” https://t.co/2tBTIfvv2q pic.twitter.com/UwZuKxrotg

“We’re gonna be voting on a piece of legislation which I will not vote for today,” he told reporters. “I would vote for a Roe v. Wade codification if it was today, I was hopeful for that. But I found out yesterday in caucus that wasn’t gonna be.”

Manchin is one of only two Democrats in the Senate who have expressed some pro-life sentiments. The other, Sen. Bob Casey (D-Pa.), announced earlier this week that he would support the WHPA, and voted with his party for the measure.

“This week, I will again vote yes to advance debate on the Women’s Health Protection Act and I will support the bill if there is a vote on final passage in the future,” Casey said in a statement.