Food prices are rising across the U.S., but the latest sticker shock at the supermarket is in the eggs and poultry aisles, as the deadly bird flu wreaks havoc on the country’s egg-laying hen flock.

Inflation data tracked by the U.S. Bureau of Labor Statistics found a dozen of eggs jumped 23% in April compared with the month before to $2.52. Prices reached levels not seen since early 2016, a period that followed the highly pathogenic avian influenza outbreak of 2014-15, which led to a 50% increase in egg prices in the second half of 2015.

Since January, the outbreak has spread to 32 states, killing more than 37 million chickens and turkeys. Of that, 29 million egg-laying hens have died, or about 10% of the U.S.’ total flock of 300 million. Bloomberg says the bird flu is “shaping up to be the worst outbreak of its kind.”

“When the outbreaks first started, the jump in wholesale values was being driven primarily by demand, as there was a bit of panic and short covering going on in the marketplace. But at this point, so much production has been removed from the landscape that it’s more of a supply-side issue,” Karyn Rispoli, an egg market reporter at commodity research firm Urner Barry, told CBS News.

Breakfast has become the most expensive in years. It’s not just eggs, orange juice and wheat prices are also soaring. 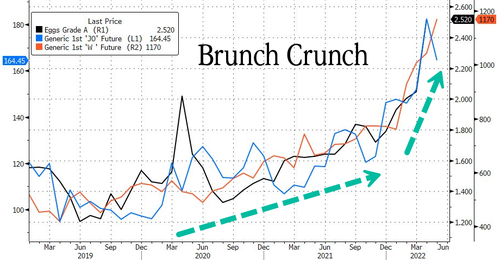 Egg prices could be headed higher as there are no indications the avian influenza spread is under control. This is just another sign that food shortages could get much worse in the second half of the year.