America’s egg shortage worsens by the week. Supermarkets nationwide are running out of eggs as prices hyperinflate. Egg arbitrage is rising as people attempt to smuggle egg and poultry products across Mexico–US border for resale in the States where they can reap hefty profits.

US Customs and Border Protection reported a 108% increase in egg and poultry seizures at land ports on the border from Oct. 1 to Dec. 31. The uptick in egg smuggling comes as retail prices erupt in the US as the avian flu forced producers to cull tens of millions of birds and egg-laying hens over the last year.

“My advice is, don’t bring them over.

“If you fail to declare them or try to smuggle them, you face civil penalties,” said CBP Supervisory Agriculture Specialist Charles Payne

Egg seizures are so rampant that CBP tweeted that smugglers will be slapped with $10,000 fines.

The San Diego Field Office has recently noticed an increase in the number of eggs intercepted at our ports of entry. As a reminder, uncooked eggs are prohibited entry from Mexico into the U.S. Failure to declare agriculture items can result in penalties of up to $10,000. pic.twitter.com/ukMUvyKDmL

People have realized there are huge profits in buying a 30-count carton of eggs at $3.40 in Juarez, Mexico, and reselling them in the US. 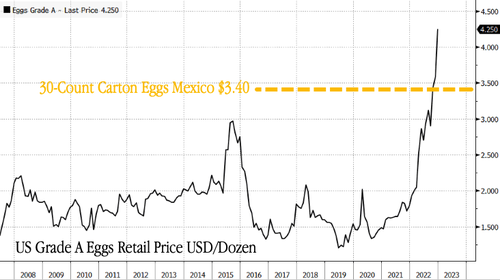 It’s only a matter of time before cartels figure out about this lucrative trade.