In late September videographer Matt Orfalea made a pair of videos for TK.

One, Memory Holed: “The Election Was Hacked,” seen above, was a simple montage of Democratic politicians, media officials, and enforcement officials saying the 2016 election was, among other things, “illegitimate,” “rigged,” “hacked,” and a “cyber 9/11.” 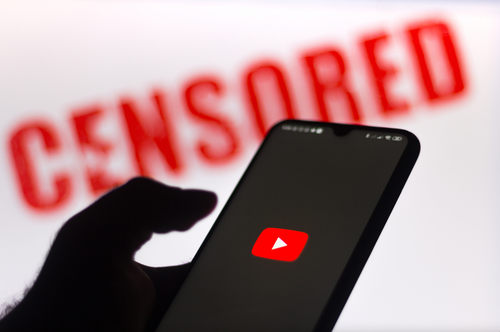 The second, Memory Holed, Part II: The “Rigged” Election, was a similar exercise, with one exception: it compared the post-2020 statements of Donald Trump to the post-2016 statements of Democratic partisans. When Trump tells Chris Wallace, “I have to see,” when asked if he’d concede an election, Orfalea shows Hillary Clinton saying, “No, I would not,” when asked in 2017 — after her loss — if she’d contest the results. He shows Trump later saying he’ll of course respect the results, “if I win,” and Hillary Clinton saying Joe Biden should not concede “under any circumstances,” essentially exact analogs.

BREAKING: I made a vid showing election fraud claims from both Dems & Repubs. In no way did I advance or endorse any of the claims. For documenting this history, YouTube just deleted it, blocked me, & gave me a strike—a step toward deleting my entire channel. @TeamYouTube 🧵/1 pic.twitter.com/MLWxlFZKOX

YouTube initially tried to demonetize both videos. After a fuss they reversed the decision about the first. Now they’ve taken a more drastic step, not only deleting the second video but two earlier rough-cut versions that were never even shown to the public but lived on his site. (This is another mad feature of the content moderation era: you can be censored and punished for pre-publication thinking). They also gave Orfalea a strike, leaving him two away from being removed from the site, which would essentially put him out of business.

YouTube’s decision claims the second video “contains claims that past US presidential elections were rigged or stolen, and our election integrity policy prohibits content that advances false claims that widespread fraud, errors, or glitches occurred in US presidential elections.” Moreover, “countervailing views, which we refer to as EDSA context, on those remarks are not provided in the video, audio, title, or description.”

We’ll go through this outrageous explanation point-by-point, but first: these videos are factual. There are no statements taken out of context. No editing games were played to make it appear someone is saying something he or she did not. This was the point of the exercise, to show what was actually said, when, and by whom.

As to YouTube’s letter, if indeed their “election integrity policy” prohibits content that advances false claims that “past US presidential elections were rigged or stolen,” then YouTube really should be taking down the first video as well:

This video after all is packed with clips of people like Karine Jean-Pierre saying the 2016 election was “stolen,” Joe Biden saying “I absolutely agree” Trump is an “illegitimate president,” Kamala Harris saying “you’re absolutely right” Trump didn’t really win in 2016, and even Jimmy Carter saying “Trump didn’t actually win the election in 2016.” Old pal Keith Olbermann proclaimed the public wouldn’t stand for this “bloodless coup” called voting, Chris Hayes said Trump “cheated,” and a conga line of officials from Adam Schiff to Elizabeth Warren insisted foreigners had “hacked our elections.”

These videos made what we believe to be a powerful and legitimate point about the framing of the last two presidential elections. The first is that despite Hillary Clinton’s reluctant capitulation on Election Night in 2016, the Democratic Party as a whole as well as key officials in the government never recognized Donald Trump as a legitimate president. Clinton in fact spent four years leading a public relations campaign insisting that a) she actually won in 2016 b) Trump only won because of fraud and actual vote tampering and c) Democrats going forward should not recognize his victory should he win a second time.

Our view is that whether it’s Stop the Steal or Russiagate, denying a president’s legitimacy because you believe a conspiracy theory is the same behavior, and should be treated the same way. YouTube by administering a strike to Orfalea is sending a message that you may leave videos of Hillary Clinton saying “we know that they were into voting rolls” (they being the Russians), or Olbermann warning “It will not be a peaceful change of power!” or the current president and vice-president agreeing their predecessor “didn’t really win,” all without YouTube’s required Surgeon General-type warning called “EDSA” (YouTube’s clunky acronym for “Educational, Documentary, Scientific, or Artistic” context). In other words, you may leave up such statements without pointing out they’re unproven, incorrect, or irresponsible.

This is a de facto endorsement of such behavior when committed by certain people. When others do exactly the same thing, it’s conspiracy theory, incitement, even insurrection.

Donald Trump of course is running for president again. His behavior after the 2020 vote will become exhibit A in the case against his re-election, perhaps even rightly so. But YouTube is signaling early on that it will not permit press outlets to compare his behavior and his statements to those of his political opponents.

This isn’t just about statements from individual has-beens like Hillary Clinton, but official bodies like the DHS and the FBI. Just like Trump, those official organizations have repeatedly engaged in a form of “election denial,” warning that upcoming elections will be packed full of efforts by foreign countries to “amplify doubts about the integrity of U.S. elections” and to “hinder candidates perceived to be particularly adversarial” to countries like China and Russia, by “spreading disinformation.”

These official statements are more or less exactly what Donald Trump is up to when he announces before an election that it’s “rigged.” It’s what he was doing weeks before the vote in 2016, when he said “Of course there’s large-scale voting fraud happening on and before election day,” and it’s what he was doing on Election Day, when he said “The machines, you put down a Republican and it registers as a Democrat, and they’ve had a lot of complaints about that today,” before things turned his way. The idea is to prepare audiences to refuse to accept results of a vote should they go the wrong way.

If you win, it’s “the cleanest election in history.” If you lose, the electorate is already primed to throw a fit. It’s dirty, unpatriotic behavior and it’s now a routine element of all elections, coming from the Trump side and from officialdom.

Worse, it’s the dirtiest kind of pool to have agencies like the FBI or DHS repeatedly leak that “Russia” or “China” prefers Bernie Sanders or Trump, and is either trying to sabotage or already succeeded in sabotaging elections on their behalf. Ask yourself what purpose public leaks of such “assessments” serve. These have a patina of legitimacy because of the organizations involved, but they’re as bereft of evidence as Trump’s Stop the Steal claims and perhaps more corrupt, because they’re so flagrant a misuse of tax dollars.

The press has to be allowed to make these points. If it isn’t, Silicon Valley is encouraging one form of unethical behavior while condemning another. Moreover, it’s punishing the media for factually accurate reporting. There is no explicit or implicit message in Orfalea’s videos that either the 2020 or 2016 vote was compromised. His videos are the opposite of election denial. He’s clearly making the point that no matter who does it, denying election results is irresponsible. If YouTube punishes him for that message, it just sends a message that all of these bad actors are right, and the system really is rigged. We’ve asked politely for a reversal of their decision. YouTube must do the right thing here.