ENGLAND will face bitter rivals Germany in the Euro 2020 Round of 16 at Wembley at 5pm next Tuesday.

The Three Lions faced a nervous wait this evening to find out their next opponents, after winning Group D by beating the Czech Republic last night.

And the identity of their Round of 16 opposition has been revealed as Germany, after their dramatic 2-2 draw with Hungary.

The two old rivals met in arguably the old Wembley’s most famous-ever occasion, when England beat Germany in the 1966 World Cup final.

And now Gareth Southgate’s side will have the chance to make history at the new version of England’s famous national stadium.

The Three Lions boss can also help erase painful memories of Euro 96, during which he infamously missed the crucial penalty as his side crashed out to the Germans in the semi-finals.

England have so far kept it tight in defence, keeping three clean sheets in the group stage of a tournament for the first time since the 1966 World Cup.

But they will now face their toughest test yet, when the likes of Serge Gnabry, Leroy Sane and Thomas Muller come to town.

Should they get through, England could enjoy a dream route to the final.

With victory over the Germans, the Three Lions would face a quarter-final against either the Group E winners Sweden or one of the best-third-placed finishers, likely to be Ukraine or Finland.

England beat the Germans at Wembley in 1966[/caption]

JUL IN THE CROWN

Then in the semis, England are in the same half of the draw as Wales – with a potential clash in front of 60,000 fans at Wembley on July 7.

The Welsh play Denmark in Amsterdam on Saturday in their last-16 clash.

The winners of that will face either Holland or England’s group rivals the Czechs in the quarters.

That leaves favourites France in the other half of the draw, along with giants Portugal, Belgium, Italy and Spain.

If all goes well, England could be facing one of them at the end of the glorious summer, in the final at Wembley on July 11.

Germany celebrate sneaking through against Hungary[/caption]

Joachim Low’s side will travel to Wembley next Tuesday[/caption]

The identity of the Three Lions’ Round of 16 opponents threatened to change a number of times on a night of twists and turns in Group F.

With Hungary twice leading against the Germans, it looked as though it could be the underdogs that were to travel to Wembley next week.

When Portugal led World Champions France in the first half of the group’s other match, it was the French that would have been hopping across the Channel to play Southgate’s men.

But their spirited fight back, helped by a dodgy penalty decision, saw France win the group, with Cristiano Ronaldo’s Portugal also through in third position. 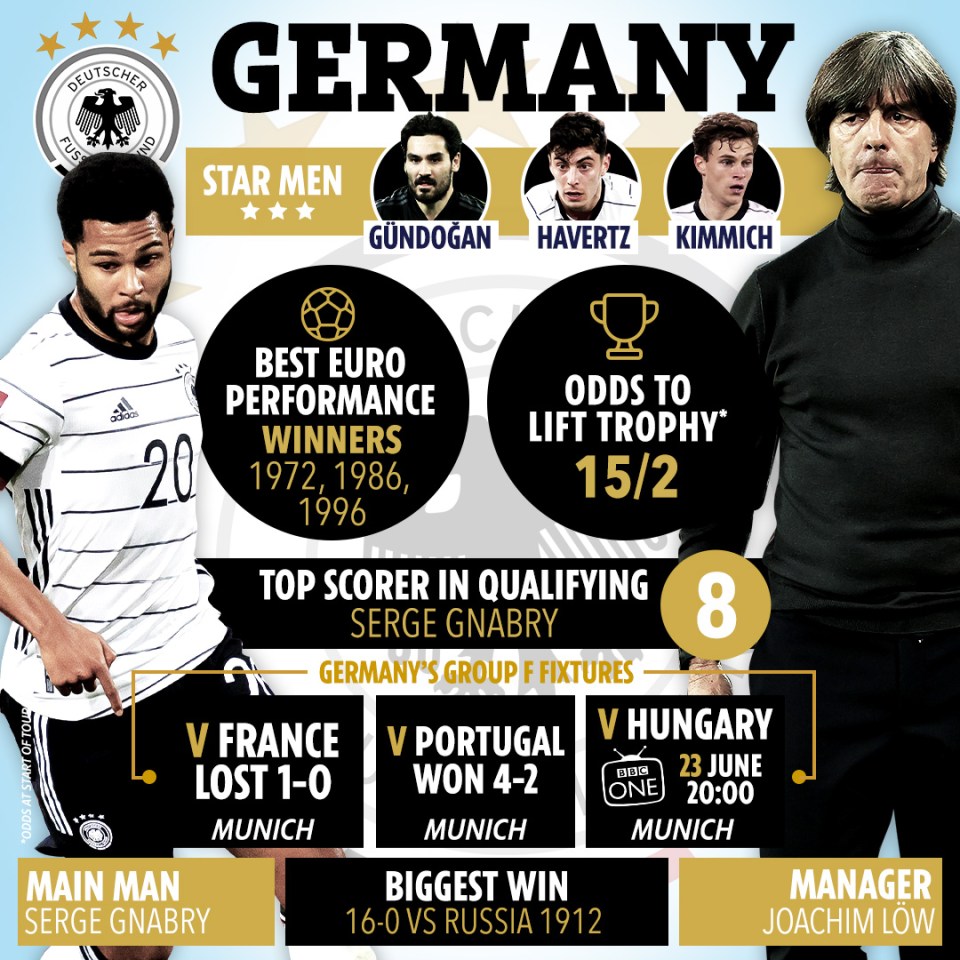