In keeping with Prime Minister Boris Johnson’s promise, England lifted its last remaining COVID-linked restrictions on movement and business at midnight on Monday, finally allowing people to move about more or less freely, even as new COVID cases are climbing in the UK and much of the EU. 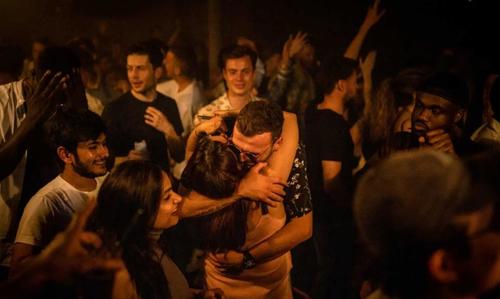 Despite the surge in new cases across the UK (which has been overwhelmingly driven by the Delta variant), instances of deaths and hospitalizations have climbed only slightly. 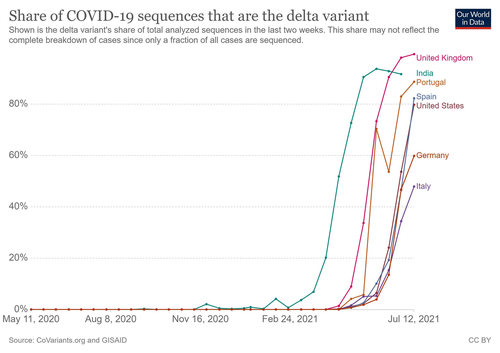 Over the weekend, the number of new daily cases climbed above 50K for the first time since January… but deaths remain de minimus (and that is with a 2 month lag from cases picking up)… 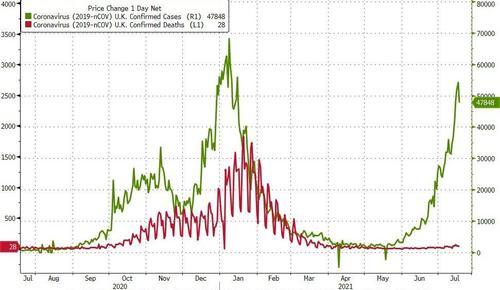 Across England, work from home guidance has been removed, along with the legal obligation to wear face masks in public places. Some “key protections” will remain, however. People who test positive for Covid-19 or are contacted by NHS Test and Trace will have to self-isolate, as will those arriving from amber and red-list countries.

BoJo’s decision has also infuriated some public health “experts”, who have in turn condemned Boris Johnson’s lifting of most COVID legal restrictions as “a threat to the world.” The UK now has the third-highest number of active COVID cases outside Brazil and Indonesia.

Others have complained – with good reason – that “Freedom Day” isn’t quite living up to its name, with one critic calling it “all mouth, no trousers”.

And not without reason. As the economy is supposedly reopening, a deluge of mandatory quarantine orders have been handed down to coworkers and family members of the infected have created serious problems for the British economy. The British press is calling it the “ping-demic” – a reference to being “pinged” by the NHS test-and-trace system. Some are worried that it could soon lead to food shortages, the Evening Standard said.

Tim Morris, chief executive of the UK Major Ports Group, called what has been dubbed the “ping-demic” as the most “significant threat to ports’ resilience we have seen yet…

“If the current trajectory of absences continues without the Government taking any action, there has to be a risk of disruption to important supply chains, including food.”

The NHS T&T app sent a record 520,194 alerts last week. Each of those represents a person (often a worker) who must quarantine for up to ten days after reportedly coming into “close contact” with someone who has tested positive.

Meat processors are saying 1 in 10 of their workforce were being told to self-isolate by the app, a development that could require firms “to start shutting down production lines altogether”.

Even BoJo has been impacted: Only hours “Freedom Day” began, the PM was himself forced to go into self-isolation after his government’s health secretary tested positive.

As Deutsche Bank’s Jim Reid pointed out in a note to clients published Monday morning, it’s becoming “increasingly difficult” in the UK to have a conversation with anybody who disagrees with your views on ending the COVID lockdown.

Those for suggest that with all the vulnerable groups fully vaccinated and every adult having been offered at least one jab then we have to start learning to live with the virus and the summer is the best place to start. To delay would only postpone cases and risks the peak occurring in winter when the health service is usually more stretched. Mental health considerations also come into the equation as does the still relatively low death rate. Those against will suggest that fully reopening now after the recent surge in cases could soon lead to high hospitalisations and genuinely risk pressurising the health service. They would also argue that new variants could emerge with such a wide prevalence of cases and could also create huge numbers of long covid cases and more deaths than should occur. Anyway, the world will be watching the U.K. experiment with huge interest. It could show a pathway back towards normality or it could be a warning to even heavily vaccinated countries that covid will be a problem for a decent length of time still.

Breaking down the numbers the big growth area over this period has been males aged 15-40. It’s the first time in the pandemic that there’s been a notable gender split.

The day has been nicknamed “Freedom Day”, and for many it didn’t disappoint. As nightclubs opened their doors and dancefloors for the first time in 16 months, young people packed into establishments to celebrate. In a message recorded at the PM’s country house, Chequers, where he is spending is quarantine, Johnson urged caution even as he said it was time to move away from government rules to a new era of personal responsibility: “If we don’t do it now we’ve got to ask ourselves, when will we ever do it?”