Angry Dollar General employees at a store located in the small town of Eliot, situated in York County, Maine, plastered handwritten notes on the front entrance sliding door of the store that read they reached their breaking point of long hours and crappy pay. As a result, the employees walked off the job, and the store closed. 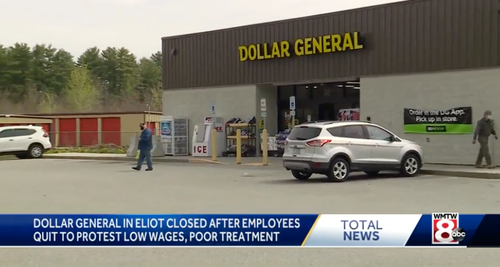 Facebook user “Bri Blanchet” had her smartphone handy and snapped a picture of the handwritten notes before they were ripped down. 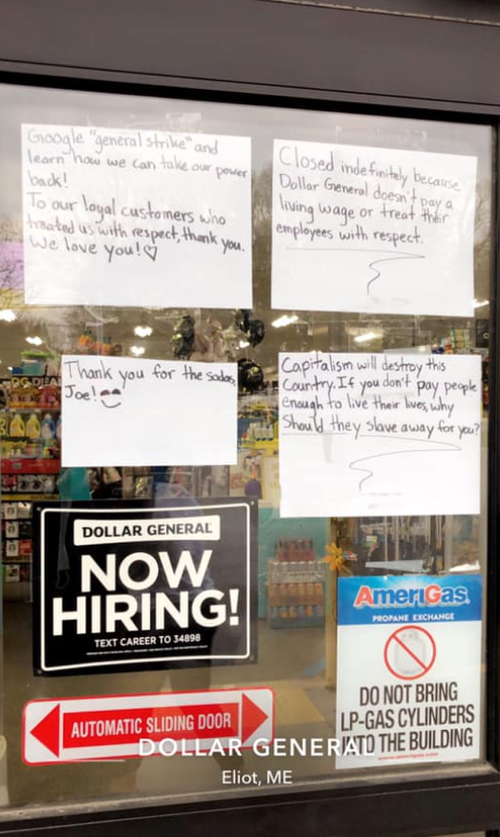 Google “general strike” and learn how we can take our power back. To our loyal customers who treated us with respect, thank you, we love you!

And this former employee blamed capitalism:

Capitalism will destroy this country. If you don’t pay people enough to live their lives, why should they slave away for you?

My manager was working 70+ hours a week we’re getting paid for 40 salaried with no days off. I was supposed to be working 20 hours a week but they needed me working 31 with one day off a week.

Another former employer told local news WMTW, “I decided to quit because I was no longer gonna take the abuse that Dollar General was giving us. As the day progressed I got more upset.”

So upset with long hours and low pay, the employees were barely scraping by, living underneath the poverty line – figuring that they could make a stand against corporate America. So why now?

Perhaps and thanks to the Biden administration, people are getting paid more to sit on their couch and play Xbox or trade meme stocks and crypto. These workers will likely file for unemployment and other benefits to receive stimulus checks in a much higher amount than their sub $10 per hour at the Dollar General.

It’s not just labor shortages companies are dealing with today – the threat of workers walking off the job is rising.

WMTW has since reported the store has reopened.