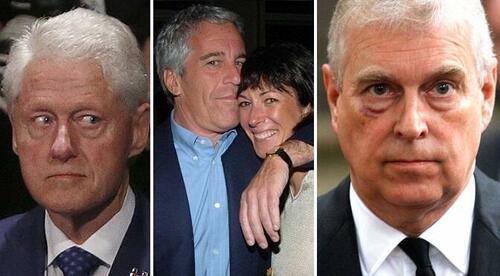 The lawsuits, filed in a New York court, allege the banks had “knowingly benefited and received things of value for assisting, supporting, facilitating, and otherwise providing the most critical service for the Jeffrey Epstein sex trafficking organization.”

JPMorgan was accused in the suit of “financially benefiting from participating” in the alleged sex trafficking through providing financial support from 1998 to August 2013. Deutsche Bank was accused of knowing that they would “earn million of dollars” from its relationship with Epstein.

Both suits are seeking unspecified damages and ask to be certified as a class action. A Deutsche Bank spokeswoman said the claim “lacks merit” and the bank will present its arguments in court. A spokesman for JPMorgan in London declined to comment. -Bloomberg

“Epstein and his co-conspirators could not have victimized without assistance from wealthy individuals and financial institutions,” said Bradley Edwards of Edwards Pottinger, one of the firms representing victims. “We will not stop fighting for the survivors until everyone is held responsible.”

And while Epstein’s client list has remained amazingly concealed during his – and sidekick Ghislaine Maxwell’s trials, the new class-action suits threaten to bring Epstein’s associations back into the spotlight – as a bevy of prominent financiers, entrepreneurs, celebrities, politicians and the British Royal Family have been associated with the dead pedophile (many of whom, like Bill Gates, had no problem hanging out with him after his first conviction).

The UK’s Prince Andrew had to withdraw from public duties after a disastrous television interview about his ties to Epstein. Jes Staley abruptly stepped down as chief executive officer of Barclays Plc last year after UK regulators shared with Barclays the preliminary findings of their multi year probe into what he told the bank’s board about his relationship with Epstein.

Staley has said that he knew Epstein since 2000 when he was head of JPMorgan Chase & Co.’s private bank and was told to strike up a professional relationship with the financial adviser. -Bloomberg

“Staley made sure Epstein and his illegal sexual abuse organization was absolutely protected by the bank,” reads the lawsuit, filed Nov. 24.

Meanwhile, anonymous accusers are being represented by David Boies of Boies Schiller Flexner, who represented Virginia Giuffre vs. Prince Andrew in a case which subsequently settled. We’re sure the prominent Democrat attorney wasn’t chosen to protect Epstein’s client list while ensuring Giuffre was also paid.

Epstein, a prolific pedophile who was, by all appearances, running a honeypot operation on prominent men, “was found dead in his US jail cell in 2019,” Bloomberg reports – which omitted any suggestion that he committed suicide.