Ethereum Soars To Record High Above $3,800 As JPMorgan Lays Out 6 Reasons Why Explosive Move Will Continue

Back on April 25, we quoted a prominent billionaire VC who said that “Ethereum is the world’s most interesting trade right now” and we predicted that “Ethereum Is About To Make An Epic Breakout Over Bitcoin.“

That’s exactly what happened: two weeks later, and one report from FundStrat’s Tom Lee putting out a $10,500 price target on Ethereum (and $100,000 on bitcoin).. 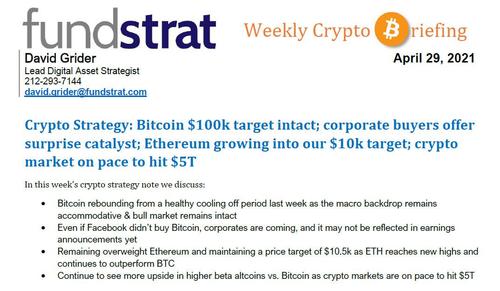 … and ethereum has returned 66% to bitcoin’s paltry 16%, a 4x outperformance which even to the most jaded traders constitutes an “epic breakout.” 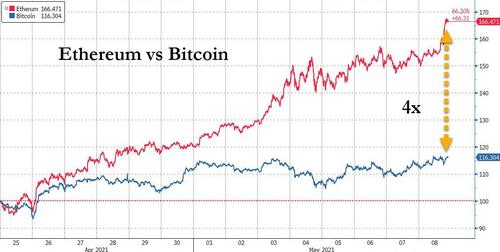 More importantly, as bitcoin has languished in the $50-$60K range over the past month, ETH has nearly doubled and moments ago traded at an all time high above $3,800. 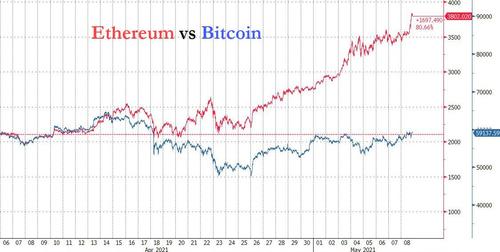 Meanwhile, the ratio of ETH/BTC finally broke out above its recent highs.. 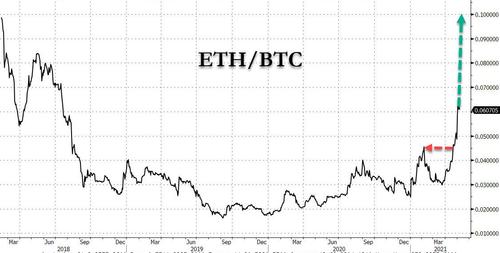 … and as we said two weeks ago “once the recent high is taken out, there is much more room to go… In fact, should ETHBTC hit its historical high, Ethereum would be above $5,000.” We are now just $1,200 away which at the current pace of ascent, may be reached some time next week.

While there are many reasons for the renewed investor fascination in Ethereum, including the launch of four ethereum ETFs, the application by VanEck for the first US Ethereum ETF, the exploding demand for NFTs, interest in DeFi and generally the realization that while Bitcoin is just a token, Ethereum is an entire digital platform (not to mention the most obvious one: relentless upside momentum which in the case of bitcoin, appears to have tapered for now).

It’s perhaps why two days after we said to brace for an “epic” ethereum breakout, JPMorgan published a note on April 27 from one of its most respected rates and fixed income (!) strategists, Joshua Young, explaining “why ETH is outperforming” in which it gave yet another reason for ethereum’s stunning outperformance compared to bitcoin: ETH valuations may be less dependent on levered  demand than BTC, a technical but occasionally important tailwind going forward. 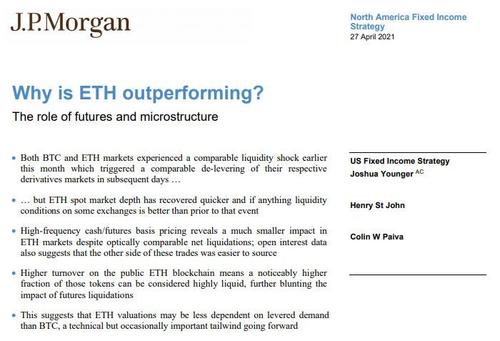 Of course, one can’t also discount the rabid frenzy to all things crypto in recent days as Elon Musk is set to appear on SNL on Saturday night and pitch the “joke” crypto, Dogecoin, whose returns have blown everything else out of the water.

So yes, there is a risk that after Saturday night, the crypto space and especially Doge, will be hit as some take profits, but as JPMorgan writes in a new note published late on Friday and authored by its versatile cross-asset quant Nick Panagirtzoglou whose job is to cover everything from retail interest in stocks to calculating the “fair value” of bitcoin and ethereum (yes, really), the move higher in ethereum has been far more striking than the one in bitcoin, and is likely to continue.

As the JPM quant writes in a section discussing “ethereum’s ascent”, the crypto market expanded sharply in recent weeks led by ethereum and other smaller cryptocurrencies, despite bitcoin still hovering below $60k, with Panigirtzoglou admitting that “the rise in ethereum in particular has been striking”, which he attributes to a combination of factors:

Indeed, JPM concedes that both retail and institutional demand indicators accelerated in recent weeks and months, while JPM’s position proxy based on CME ethereum futures, shown in Figure 6 more than tripled during April pointing to significant, around $250mn, of institutional buying in Etherem. 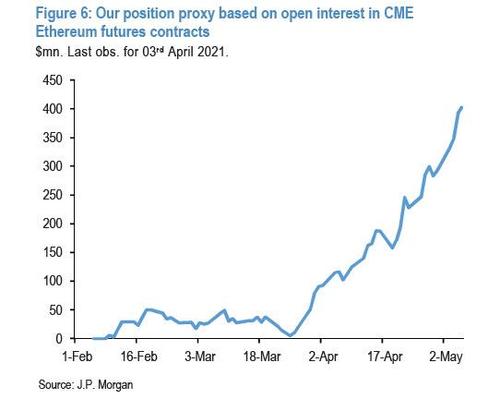 The flow trajectory for ethereum funds got boosted in April from the launch of four ETFs, pointing to a mix of institutional and retail impulse (Figure 7 and Figure 8).

These flow metrics look even more impressive if one compares them to the equivalent for bitcoin as shown in Figure 9 and Figure 10.

The surge in interest is translating into rapidly accelerating activity on the ethereum network, similarly implying rising demand.

And while we were quite surprise by the JPM’s bullish take on ethereum at least as compared with its persistent bearishness on bitcoin, it is not surprising that the bank’s quant concluded his report with a warning, noting that “the past weeks have not only seen a large expansion of the market cap of ethereum but also of other coins such as Binance Coin, Dogecoin, Litecoin, Ethereum Classic, and others. This expansion has shifted the market cap of cryptocurrencies excluding Bitcoin and Ethereum and as well as stablecoins to a staggering $800bn with the share of bitcoin in the total crypto market falling steeply from around 60% to 45% over the past month.” 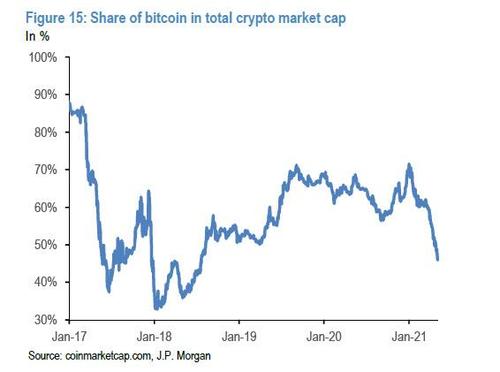 Of course, the JPM strategist has to admit that a big part of this decline has been helped by increased institutional interest in ethereum (the same ethereum whose “striking” move higher he believes will continue). But to the extent it is driven by a rally in other cryptocurrencies driven more by retail demand, Panigirtzoglou writes that “it carries some echoes of the froth that was evident in December 2017 when the share of bitcoin had fallen from around 55% to below 35%.”

Of course, those who actually traded through the crash of 2018 know that it had little to do with retail participation and everything to do with the Fed’s ongoing tightening, with the Fed hiking rates three times in 2017 and then another 4 in 2018. So while there may be similarities, there is one giant difference, namely that for now the Fed has little intention to taper QE let alone hike rates. In fact, if one goes according to comparisons to the Fed’s last rate hike cycle, ethereum, bitcoin, and other cryptos, will peak some time in late 2024, one year after the Fed will have started its latest (failed) tightening cycle. The only question is how many tens (or hundreds) of thousands of dollars one ethereum token will cost then. 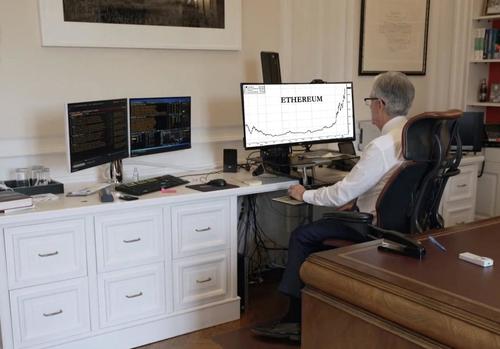