For the first time in two years, Bitcoin’s “dominance” of the crypto-space has fallen back to 50% as altcoins see a sudden resurgence in popularity…

Ethereum has been the biggest gainer during this recent run, having now recovered all of the plunge losses from the weekend and rallied to a new record high 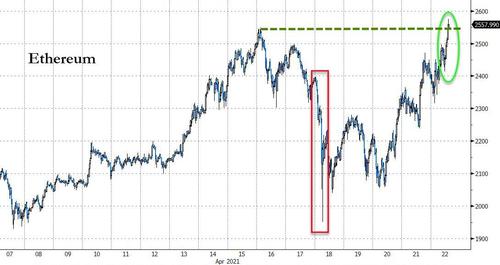 That pushed Ethereum’s market cap above that of Exxon Mobil, Intel, and Coca-Cola… 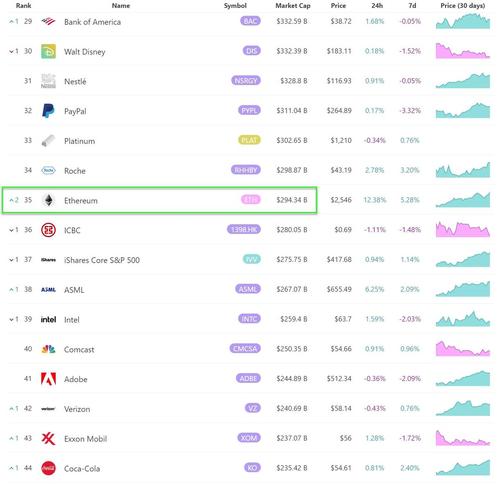 As CoinTelegraph reports, the recent Berlin update has laid the groundwork for the much bigger London hard fork, which will activate EIP-1559. The controversial change will overhaul Ethereum’s existing fee structure, but experts have stated that the new base fee mechanism would not provide a long-term solution for Ethereum’ scalability problems.

Whatever the reason behind Bitfinex’s margin markets shifts favoring bears, there’s no indicator better than the 20% ETH price increase that took place over the previous four days.

On a side note, Bear Traps Report’s Larry MacDonald notes that a billionaire VC told him this week to “pay attention – ETH/BTC about to make an epic breakout. I think Ethereum is the world’s most interesting trade right now.”

Bitcoin continue to languish, unable to catch a bid after the weekend’s liquidation. 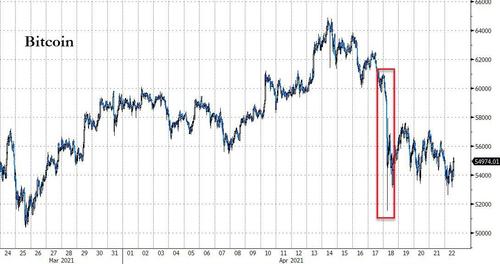 Bitcoin may be under some pressure after a report by The Guardian that Morten Friis, the head of the UK bank NatWest’s risk committee, revealed that the bank will refuse service to business customers that accept cryptocurrency payments.

“We have no appetite for dealing with customers, whether taking them on as new clients or having an ongoing relationship with people, whose main business is backed by an exchange for cryptocurrencies, or otherwise transacting in cryptocurrencies as their main activity.” 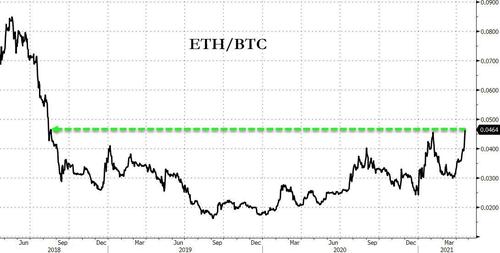 Meanwhile, not all altcoins are up as DOGEcoin is now down over 40% from its record highs … 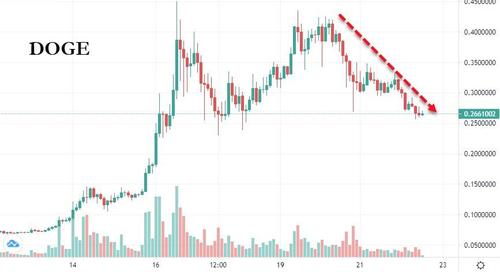 Time for a Musk meme to save the world?