Just after Pfizer reported blockbuster quarterly profits, US trade rep Katherine Tai spilled the beans to Bloomberg that the White House had decided to back a WTO proposal to waive vaccine IP. Bill Gates, the world’s de facto vaccine czar, was probably less than thrilled to hear the news.

Gates has vigorously opposed the waiver, and by backing it, the White House has effectively helped to validate Gates’s critics, like the New Republic, who have accused him of putting profits before people’s lives. 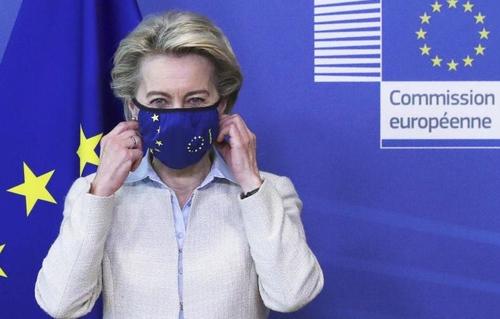 Now, European Commission President Ursula von der Leyen has announced that the EU is considering joining the US in supporting the waiver proposal, which was put forth by India and South Africa.

The head of the EU’s unelected executive body said the bloc’s vaccination effort was accelerating, with 30 Europeans inoculated per second as of Wednesday, while exporting more than 200MM vaccine doses to the rest of the world. She added that the bloc is “ready to discuss” supporting the waiver – though of course no final decision of support has been made.

“The EU is also ready to discuss any proposals that addresses the crisis in an effective and pragmatic manner,” von der Leyen said in a speech to the European University Institute in Florence.

“That’s why we are ready to discuss how the US proposal for a waiver on intellectual property protections for Covid-19 vaccines could help achieve that objective.”

South Africa and India made the initial vaccine waiver proposal at the WTO last October, and since then it has gathered support from a large number of developing countries, who say it is a vital step to make vaccines more widely available. At this rate, the entire world is effectively left to negotiated shipments of vaccines with the major producers, who have a monopoly on supply.

The news will likely delight the WHO, which complained last month that out of 700MM vaccines doses globally administered, only 0.2% had been in low-income countries.

Tedros Adhanom Ghebreyesus told the FT that Biden’s decision was a “monumental moment” in the fight against Covid-19. “I am not surprised by this announcement. This is what I expected from the administration of President Biden.”

Until now, the EU has been with a group of countries – many of them home to large pharmaceutical companies, including Britain and Switzerland – that has opposed the waiver.

On Thursday, India welcomed the Biden Administration’s support for the waiver.

“We are appreciative of US support,” foreign ministry spokesman Arindam Bagchi said.

Pharmaceutical company stocks extended yesterday’s declines on the news that the EU could also break away and the support the waiver. Two notable decliners on Thursday were Chinese pharmaceutical stocks Fosun Pharma, CanSino Biologics and Waivax Biotech.

“Chinese vaccine makers Fosun and Walvax will suffer a direct impact on the news, it will hurt profits and the R&D expenses will make no sense. If approved, other vaccine producers’ market share may decrease,” said Wang Ruizhe, analyst atCapital Securities.

To be sure, many other developed countries must also change sides and back the waiver for it to have a hope of passing. These include Japan, Switzerland, Norway, Brazil and others.