Leaders of the European Union are set to propose a natural gas price cap for one year, according to new draft legislation obtained by Reuters. But the new plan to contain elevated energy prices due to a plunge in Russian NatGas following the war in Ukraine might have trouble being passed because there would be disagreements among EU leaders about whether and how to cap prices.

Greece, Italy, Belgium, and Poland are expected to block the draft if there are no mechanisms to contain NatGas prices this winter. But not everyone wants caps. Germany, the Netherlands, and Denmark are opposed to market intervention unless strict safeguards exist, such as not affecting NatGas flows.

But energy exchanges and traders cautioned implementing price caps on the TTF’s upcoming month contract because it would result in more significant pressure on energy markets — and could threaten risks to financial stability and supply security, according to the European Energy Exchange.

“This proposal has the potential to widen the energy crisis into a wider financial one as well, because it significantly impairs the trading activity of market participant.

“We are especially concerned that the effects of this proposal would be evaluated ex-post, which is too late when the damages have occurred,” said Tobias Paulun, chief strategy officer at Deutsche Boerse’s EEX.

EEX said price caps on TTF could trigger “major risks to financial stability and security of supply.” They said if prices exceed the cap, some market participants will shift to over-the-counter (OTC) trading, which will create a “significant decrease in transparency,” adding OTC trading would imply “greater risks for counterparties and the financial system” with “incalculable uncertainty.”

Reuters said the draft calls for caps to kick in if extreme volatility was detected in European markets without a move in global markets.

On Monday, the European Federation of Energy Traders said caps could spark “severe, unintended and irreversible consequences in harming market confidence that the value of gas is known and transparent.”

The EU’s Agency for the Cooperation of Energy Regulators would monitor market conditions for volatility and inform EU executives immediately if there was a need to contain NatGas prices. A cap would then be able to be implemented on the same day to prevent prices from rising even higher. The cap can be suspended if unintended negative consequences for the bloc arise, such as the security of supplies.

Bloomberg said the proposal called for a price cap of around 275 euros per megawatt-hour. That’s well above the current level of 119.50 euros.

“The tool will be used if futures on the Dutch Title Transfer facility exceed that level for two weeks and the gap between TTF and liquefied natural gas prices is greater than 58 euros for 10 trading days,” Bloomberg added. 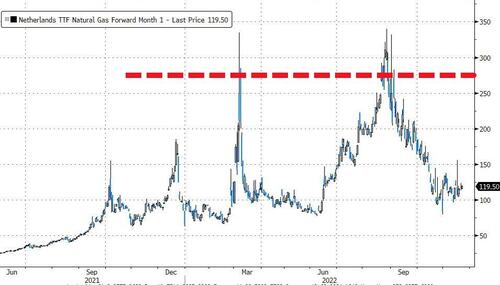 Putting price caps on energy markets is a sure way to spark unintended consequences and worsen the situation. In less than two weeks, on Dec. 5, the Group of Seven nations — the U.S., Canada, France, Germany, Italy, Japan, and the UK — and Australia will agree to set a price cap on Russian oil.

Mnuchin told CNBC’s Hadley Gamble during a panel at the Milken Institute’s Middle East and Africa Summit that the oil price cap was “not only not feasible, I think it’s the most ridiculous idea I’ve ever heard.”