The steepening rout in China Evergrande’s shares have sent them far below the value of its assets, showing how pessimistic investors are about the developer’s ability to generate cash.

Evergrande shares trade at just 62% of book value following Monday’s plunge, the lowest-ever valuation in data compiled by Bloomberg going back to its IPO in 2009. The wide deviation from its market value suggests shareholders are pricing in a significant decline in the assets’ earnings power. In terms of dollar amounts, its shares have lost $15 billion in value since this year’s January high.

The collapse in the valuation of the shares is a problem for a heavily indebted company with narrowing options for raising funds. It’s not just its own shares: subsidiary Evergrande Property Services has lost about $17 billion in value since its February high, while Evergrande New Energy Vehicle is down more than $60 billion in the period. Evergrande controls more than 60% of both firms. The value of Hengten Networks — a Hong Kong-listed internet services provider in which Evergrande has a 38% stake — has dropped about $15 billion.

The company’s access to freely available cash is also shrinking. After the shares plunged 16% on Monday following the freezing of a bank deposit, a city in Hunan province halted sales at two of the company’s residential projects, alleging the developer didn’t properly handle funds. The suspension will last until Oct. 13 and Evergrande can’t use funds currently deposited in supervised bank accounts, according to a statement. 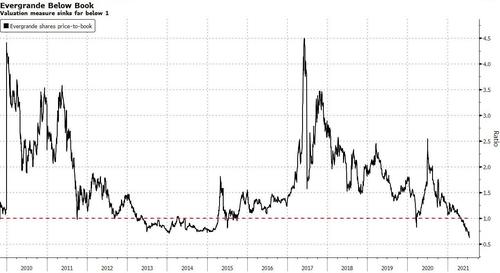 Evergrande will discuss plans for a special dividend to its shareholders at a board meeting on July 27. The developer is unlikely to fund such a plan with cash, according to CCB International analysts. They predict the most likely outcome would involve a share distribution in one of its units, namely Evergrande New Energy Vehicle, but the value of those shares is fast evaporating.

The company’s bonds are also pricing in a bleak outcome for the developer. Evergrande’s 8.75% dollar bond due 2025 trades at 58.5 cents, Bloomberg-compiled prices show. That’s down from 82.9 cents at the beginning of the year. The company hasn’t sold a single dollar bond in more than 17 months.