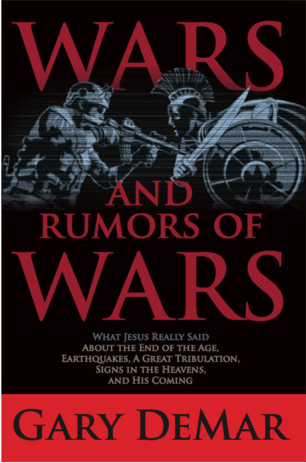 The following article, Exegetical Gerrymandering to Overcome the Obvious, was first published on The American Vision.

This is the third part of my series on the use of the second person plural in Matthew 24 (Part 1 and Part 2). Preterists aren’t the only ones who identify the use of the second person plural as indicative of a first-century fulfillment. Anyone reading the passage for the first time would conclude that Jesus was referring to those of His generation, that’s why so much exegetical gerrymandering is needed to overcome the obvious. The following is from Jonathan Menn’s Biblical Eschatology: [1]

Both the historical and literary contexts of the reference “abomination of desolation” indicate a historical event surrounding the AD destruction of Jerusalem, not an “end-time” Antichrist. Christ’s admonition to his disciples, “when you see” the abomination of desolation or Jerusalem surrounded by armies (Matt. 24:15; Mark 13:14; Luke 21:20) suggests the events of AD 70 since Jesus was talking to his disciples, “you” as in the second person plural, and the events of AD 70 were in the lifetime of the disciples. Kenneth Gentry articulates what should otherwise be self-evident: “Surely Jesus does not denounce the first-century temple in which He is standing  (24:1) by declaring it ‘desolate’ (23:38), prophesying its total destruction (24:2), ten answering the question ‘when shall these things be?’ (v. 3), and warning about the temple’s ‘abomination of desolation’ (v. 15) only to speak about the destruction of a totally different temple two thousand years (or more) later.” [2]

Second, for a future abominable event to take place as is described in 24:15, there would need to be another rebuilt temple. Jesus does not say anything about a future physical temple. There isn’t a single verse anywhere in the New Testament that says the temple needs to be rebuilt or will be rebuilt. The temple was standing when Paul wrote to the Thessalonians (2 Thess 2) and when Revelation was written (Rev. 11:1–2). Even those who claim a temple will be rebuilt admit there is no verse to support their claim. For example, rebuilt-temple advocates Thomas Ice and Randall Price acknowledge, “There are no Bible verses that say, ‘There is going to be a third temple.’” [3] The burden of proof is not on to the preterist to prove that the New Testament doesn’t say anything about another rebuilt temple. It’s up to futurists like Brock Hollett to prove the Bible says the temple will be rebuilt and Jesus is making a case for such a position in Matthew 24:15 given the use of the second person plural, Matthew 24:33 (“when you see these things”), and Matthew 24:34 that clearly states the prophetic events described by Jesus took place before their generation passed away.

Third, the events that follow Matthew 24:15 can be escaped on foot. This means this was a local event of ancient times that included Sabbath observance, flat roofs, and valuable commodities like a cloak. In Exodus 22:26–27, a person’s cloak was often used as a pledge or collateral, as a result, James Jordan writes, the person holding the cloak was “to return it to him before the sun sets, for that is his only covering; it is his cloak for his skin. What else will he sleep in?” Later in Matthew 24, “grinding at the mill” (24:41; see Deut. 24:6) is mentioned. Who does this today? How does this fit with our modern era? It doesn’t. Futurists argue that the events of Matthew 24 refer to a global event. There is nothing global about what Jesus is describing (24:16–17).

A verse-by-verse study of Matthew 23-24 showing that the fufillment of the Olivet Prophecy took place before that generation passed away, just like Jesus said it would.

If the second person plural is about a future audience, who are the “you” who will see the abomination of desolation standing in the holy place? The world won’t see it. Some might argue that the event will be seen live on TV. So how would these viewers follow the command of Jesus to flee to the mountains outside of Judea? Only those living in Jerusalem would see it, and what good would it do to flee to the mountains when a global tribulation is supposed to take place when a third of the stars will hit the earth (Rev. 6:12–14)?

James Jordan has a unique perspective on the identity of the abomination of desolation. Jim is always worth listening to:

Possibly the completion of the temple, now wholly dedicated to preserving the dead forms of Old Creation religion against Jesus Christ, is the specific event Jesus was prophesying. The abomination of desolation stands in the “holy place.” The word “place” here is not the word used for the Holy Place of the tabernacle and temple, the outer room of God’s Palace, the word hagios. Rather, the word for “place” here, topos, indicates a general area, in this case a holy area. What is in view is the temple mount, and the abomination is the temple.

Jesus had claimed that He was the true Temple. By continuing to build Herod’s temple, the Jews were explicitly rejecting Jesus’ claim. The completion of that false temple brought to a fulness that sacrilegious rejection, and at that point God completely abandoned the Jews.

The completion of that temple naturally caused great rejoicing among the Jews. Now they were sure that God was on their side. Their leaders, the false messiahs and false prophets, encouraged them to revolt against Rome and to wipe out the obnoxious Christians. The restraint that God had exercised over the Jews had been removed and they attacked in full fury, doubtless also encouraged by Nero’s imperial persecution of the Christians, which began at this same time.

Thus, the completion of the temple is not the main sin. It is only a sign to the believers that the Great Tribulation is about to start. That great persecution of believers is the actual abomination that brings about the destruction of Jerusalem, as the blood of the martyrs of Revelation 14 calls down God’s wrath in Revelation 16–17.

These were most likely the “mockers” Peter described in 2 Peter 3:3–4 (also Jude 18). They were mocking because the temple was standing more gloriously than ever before, and yet Jesus had predicted that it would be torn down stone by stone before their generation passed away (Matt. 23:38; 24:1–2).

Fourth, Jesus said that no one knows the day or the hour when this judgment coming would take place (24:35–36). This means it could have happened within five years or ten years. The audience reference “you” fits with knowing the generation—their generation—but not the day or hour of that end-of-generation judgment.