One month after the Fed’s key benchmark “administered” rate – the effective Fed Funds rate – hit the second lowest on record, or 0.05%, only to stage a modest increase for in the month of May when it traded at 0.06% for most of the month, overnight the closely watched EFF dipped once again, inching back closer to zero overnight, and is just 1 basis point away from the lowest print ever. 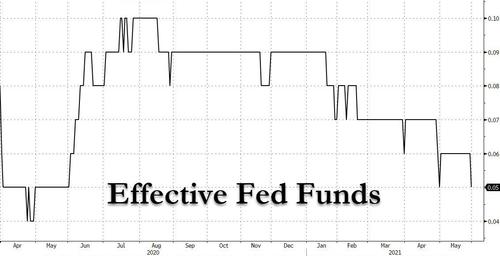 The effective fed funds rate, which the central bank is currently aiming to keep within a range of 0% to 0.25%, slipped by 1 basis point to 0.05% on May 28, the lowest since April. A chronically lower level in the EFF raises the possibility that the bank will tweak the rates it sets for interest on excess reserves and its reverse repurchase agreement facility, although according to Goldman simplyy raising the IOER will not be as effective in raising both the RRP and IOER rates. If the Fed did move both rates up by 5bp, Goldman’s model suggests that Fed funds and SOFR would move up to 8bp and 5bp respectively. 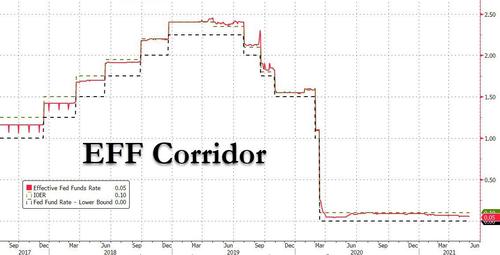 The decline was largely expected, and is yet another manifestation of the record liquidity glut that last week pushed usage on the Fed’s reverse repo to $485 billion, the highest on record.

The combination of record high overnight Reverse Repo usage and (almost) record low effective fed funds, is a combination of two things: the tidal wave of cash – a function of continued expansion of the Fed’s balance sheet (from QE) and a simultaneous reduction in cash balances in the Treasury General Account (TGA) at the Fed – which we have discussed extensively here in recent months, and which is keeping downward pressure on short-end rates as investors scramble to find some collateral in which to park reserves, combines with rising inflation concerns which fuel speculation about when the Fed will take its foot off the accelerator and taper.

The decline in the EFF means that an adjustment to these administered rates is now almost guaranteed, according to Wrightson ICAP economist Lou Crandall, who however said that there’s less of a chance the bank will make a balance-sheet adjustment “to address the root of the problem.” He also sees it potentially being smaller than similar prior tweaks. In other words, a 5bps hike in the IOER is now on the table. And, to be sure, the latest FOMC minutes explicitly said that downward pressure on overnight rates in coming months could warrant consideration of a modest adjustment to administered rates.

Discussing the upcoming IOER rate hike, Goldman’s economists wrote last week that according to their analysts, the Fed “will likely have to raise both IOER and RRP rates if it wants to maintain a 5bp buffer between Fed funds and the bottom of the target range in the run-up to the debt limit date (July 31).”

Goldman also addresses how the massive increase in overall liquidity is spilling over from commercial banks, noting that as the exhibits below show, in the early part of this run-up, the increases largely occurred in reserve balances as commercial banks absorbed the bulk of excess liquidity supply on their balance sheets. However, as leverage ratios have become more binding, banks have taken various measures to curtail deposit growth, including a reduction in wholesale funding and FHLB advances, and imposing deposit caps and cutting rates. 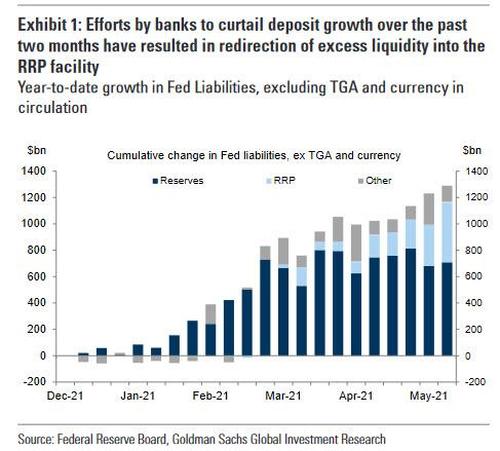 And, as regular readers know, while reserve growth has stabilized this quarter, other liabilities — mainly domestic and foreign reverse repo balances — have soared, with Goldman now expecting that Reverse Repo (RRP) facility usage will rise as high as $600-700bn.

What is driving this spike in usage?

Because banks appear unwilling to warehouse new supply of excess liquidity, the marginal amounts being supplied are no longer “inert,”and are instead being channeled into money markets, as evidenced by swelling money market fund AUMs. This has led to a competition for short-term investments, at the same time that Treasury is engaging in significant bill pay downs. The net result is downward pressure on a range of short-term yields, with many spreads to the Interest on Excess Reserves (IOER) close to all-time lows (Exhibit 2). With bill yields in some cases negative, and repo rates close to zero, many funds have chosen to instead leavemoney in the Fed’s RRP facility. 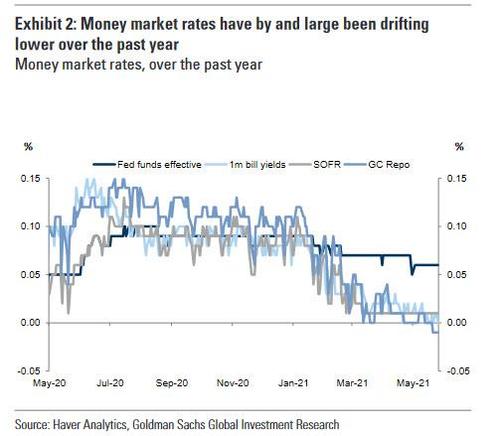 It is worth noting that without the Fed’s RRP facility which offers market participants a zero interest rate alternative (the facility rate is currently set at 0), many of these front end rates would have traded even lower relative to IOER than they are today, with most if not all trading negative today (Goldman calculates that without a RRP facility, effective Fed funds and SOFR would likely have set at 4bp and -2bp without a RRP facility, versus actual observed values of 6bp and 1bp respectively).

And speaking of the Fed’s next meeting – scheduled for June 15-16 – investors will be watching not just for tinkering of administered rates, but also for indications about when the Fe will begin to taper their bond-buying program… or at least start talking about talking.

Incidentally, as we discussed last week, the liquidity glut created by the Fed is a key reason why the Fed’s tapering is already being spun (by the likes of repo guru Zoltan Pozsar) as positive – after all, it will slow down the pace at which excess liquidity is entering the market, currently at $120 billion a month – so once the Fed does build up the courage to discuss tapering, the narrative damage control police will be engaged and the slowdown in Fed liquidity injections will be spun as extremely positive for if not risk, then certainly repo markets which are on the verge of breaking.

For his part, Crandall believes the Fed should engage in another Operation Twist, where the central bank adjusts the maturity mix of its asset purchases to relieve some of the short-end strains. Although the Fed has shown little interest in a “Twist-like combination” of long-end buying and short-end runoffs, he wrote.

“There is no fundamental reason why the Fed should be sitting on more than $1 trillion of Treasuries maturing within one year at a time when nonbank investors are so starved for short-end assets that money funds are forced to recycle half a trillion dollars of surplus cash back into the RRP facility,” Crandall wrote.