The biggest monetary circle jerk in world history, where the Fed floods the system with billions in liquidity in the form of its daily QE, and then quickly mops it up when that same liquidity is parked right back at the Fed by dozens of banking counterparties in the form of reverse repos is getting so bloated it is about to break the Fed’s key rates pathway.

On Tuesday, the Fed’s reverse repo facility saw a record $1.190 trillion in funds dumped at the Fed – inert cash which earns 0.05% annually courtesy of the Fed – and a jump of $49 billion overnight. 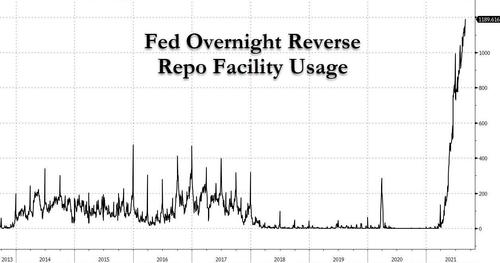 A big reason behind the jump was the traditional month-end liquidity scramble (whether that is the case or not we will find out in a few minutes when we get the Sept 1 ON RRP usage), but whatever the specific reason there is no denying that the Fed’s most important liquidity facility is rapidly headed to $2 trillion if not more.

The problem is whether we can get there without the Fed’s most important rates corridor getting breached in the process.

That’s because on Tuesday, the key benchmark that the Federal Reserve targets to control monetary policy slid to just 0.06% – a whopping 2bps drop from the 0.08% the day before. Whopping because while 1 basis point may not sound like much, when one applies millions of turns of leverage to this core liquidity rate, it starts to add up.

In any case, the effective fed funds rate – which is bounded in loose terms by the Fed’s lower and upper fed funds corridor or 0.00% to 0.25%, and framed in a functional sense by the Reverse Repo rate on the bottom and the IOER rate on top, closed the gap to the offering yield on the Fed’s overnight reverse repurchase agreement facility, which is supposed to act as a floor for the front end, to just 1 basis point! As a reminder, the Fed raised its administered rates in the June FOMC precisely to avoid a scenario where the effective Fed Funds rate encroaches on the lower end of the Fed’s rate corridor… 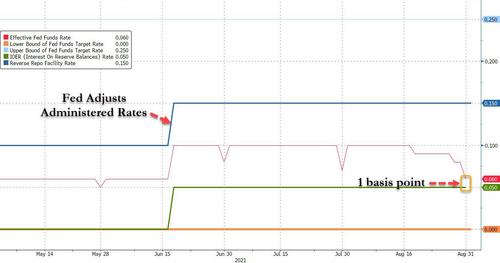 To be sure, many expect the rate to rebound to 0.07% or 0.08% today now that the month-end liquidity glut has passed. Indeed, Wrightson ICAP said it expects fed funds and OBFR to settle in at Monday’s levels of 0.08% and 0.07% for the first half of September

As for the earlier decline in the fed funds rate, the culprit appears to be excess liquidity that is sending the Federal Home Loan Bank discount rates lower amid continued reserve expansion and bill paydowns, according to Credit Suisse

“This has been evident over the last couple weeks, with FHLB Chicago’s overnight discount rate falling from 4.5bp to 2bp,” strategist Jonathan Cohn writes in a note. “At these lower rates, the trade borrowing dollars via overnight discount notes and lending into FF can earn the same spread at a lower FF rate.” FHLBs are the primary lenders in the fed funds market, so it’s no surprise that such a change in funding rates could move the market.

Cohn added that the dynamic shouldn’t worry the Fed as long as the arbitrage trade that defines the fed funds market remains intact and the reverse repo counterparty limits don’t bind the GSEs. However, with just 1 basis point of buffer between the effective Fed Funds and the Reverse Repo rate, there is virtually no margin of error left and should we get a convergence then the Fed may have to scramble to hike its administered rates once again, pushing the Reverse Repo rate to 0.1% or more.

Meanwhile, as Bloomberg explains the pressure pushing down overnight rates toward zero is proving a major headache for money-market funds as it “hampers their ability to invest profitably, and can lead to further disruptions as they begin to waive fees to avoid passing on negative rates to shareholders. A number of firms including Vanguard Group shut down prime money-market funds last year after struggling to cover operating costs in the low-interest-rate environment.”

As discussed here previously, money-market rates have been under pressure all year as a result of the central bank’s long-standing asset purchases and drawdowns of the Treasury’s cash account, which is jamming reserves into the system, and the only outlet is the Fed’s own reverse repo facility.

At the same time, supply of much needed collateral has been dwindling as the Treasury cuts bill supply to create more borrowing room under the debt ceiling, leaving investors scrambling for places to park cash. And, as noted above, those that have access to the Fed’s so-called RRP facility have opted to leave money there, pushing balances to all-time highs in recent days.

“The system certainly remains very flush with liquidity,” said Credit Suisse’s Cohn. “That said, the capacious RRP facility, as well as apparent Fed willingness to lift counterparty limits should they result in downward pressure on overnight rates, definitely reduces the risk associated with such a backdrop.”

We would not be so sanguine: in the minutes of the July 27-28 FOMC meeting, we read that Lorie Logan, manager of the System Open Market Account at the New York Fed, said that it may become appropriate to lift the RRP counterparty limit from $80 billion if a number of users reached their threshold.  And with just 1 basis point away from “crossing the streams”, the Fed may have no choice but to do everything it can to ease liquidity constraints in a system which is bursting at the seams with the Fed’s trillions in excess liquidity.