A Bloomberg survey found that farmers will plant 2 million more acres of soybeans and about 2 million fewer of corn. That’s because soybeans require very little fertilizer versus corn. 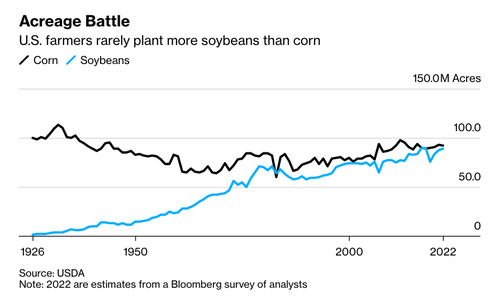 Farmer Tim Gregerson of Omaha, Nebraska, said he’ll plant more soybeans this year because “fertilizer is out of control.” He said fertilizer prices spiked even before the Russian invasion, and it was then he decided to reduce the corn-to-soy ratio to about 50-50 this upcoming growing season.

On top of soaring fertilizer prices, he told Bloomberg, diesel, tractors, machine parts, feed for livestock, herbicide, and seed costs, and just about everything to do with farming are astronomically higher this year.

Farmer John Gilbert near Iowa Falls, Iowa, said his decision was made in January when fertilizer prices spiked.

A gauge of prices for US Gulf Coast Urea, US Cornbelt Potash, and NOLA Barge DAP, called the Green Markets North American Fertilizer Price Index, is up 43% since the Russian invasion and up 233% to $1,270 per ton since the start of the 2021 growing season.

The rising cost of natural gas, the primary input for most nitrogen fertilizer, has been one reason for rising fertilizer prices. Also, global supplies are expected to tighten as Russia will limit fertilizer exports to ‘unfriendly‘ countries. Russia is one of the biggest exporters globally — the US just so happens to be a large importer of nitrogen and potash from Russia. 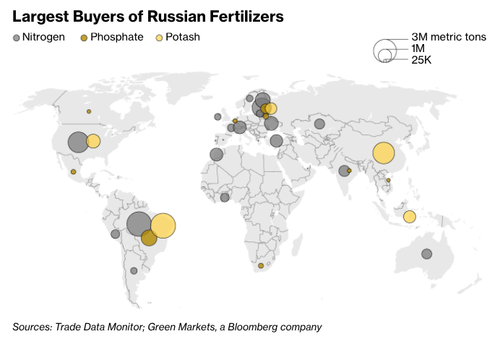 Gregerson said due to global disruptions, “getting fertilizer is going to be more and more of a problem for the world in general.” In return, farmers will transition to crops that use less fertilizer — and it will be done globally.

In central Illinois, farmer Kenneth Hartman said he might not get much income off the soybeans but won’t have the expenses of planting corn.

Hartman also said high costs to plant corn is still a gamble because there’s still an environmental factor the crop year could be poor.

Increasing fertilizer prices could convince more farmers to plant more soy and less corn. If so, this would be the first time since 1983.