Things are starting to crack. 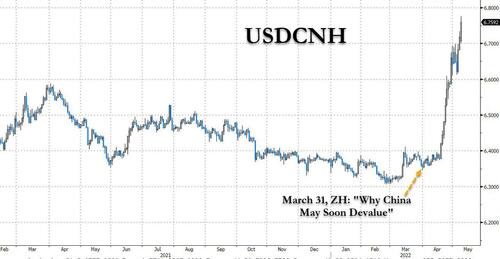 … a move that was of extreme importance for markets, yet which few financial commentators were discussing, on Wednesday the surging US dollar forced Hong Kong to intervene and defend its currency for the first time since 2019, putting further upward pressure on interest rates in an economy already reeling from strict pandemic border controls and a shaky property market.

Capital outflows fueled by rising interest rates in the US and continued modest easing in China, sent the Hong Kong dollar to the weak end of its 7.75-to-7.85 per greenback trading range late Wednesday.

And with the barrier in danger of breach, the Hong Kong Monetary Authority – the local central bank – bought about HK$1.59 billion to prop up the currency, which was still trading at the weak end on Thursday morning local time.

The testing of the band’s limit on Wednesday came around the same time as faster-than-expected US inflation data sent the greenback briefly up and Treasury yields surging. While gauges of the US dollar and longer-maturity Treasury yields subsequently retreated, Hong Kong’s currency continues to hover right near the band’s edge.

While the HKMA may have prevented the breach of the peg for now, further intervention will drain liquidity from Hong Kong’s financial system, slamming local assets and driving up borrowing costs at a time when the local economy is contracting under the weight of some of the world’s strictest Covid-containment controls. Rising interest rates also pose a threat to Hong Kong’s property market, with Goldman Sachs Group Inc. saying earlier this year that home prices in the world’s least affordable market may slump 20% by 2025.

While some commentators have called on Hong Kong to abandon its dollar peg, there’s little sign that authorities plan to change a system that has survived multiple speculative attacks since 1983 and helped turn the city into one of the world’s most important financial centers.

This time may be different, however, as selling of the local dollar has only intensified in recent months as the increasingly hawkish Fed boosted the US dollar, while pandemic restrictions in both China and the former British colony have damped local growth outlook, and forced authorities to keep rates and and consider how to ease further.

The Hong Kong dollar has weakened about 0.7% this year, far less thatn the Chinese yuan, with some of the declines coming as Fed rate hikes widened the funding rate gap between the US and the special administrative region, prompting traders to borrow the currency in the interbank market and sell it versus the higher-yielding greenback, Bloomberg reported. Making yield differential defense increasingly difficult, the premium of the three-month US interbank rate, known as Libor, over Hong Kong’s equivalent, Hibor, expanded to the widest since 2019 in April.

The Hong Kong dollar will remain under pressure as US yields climb on rate-hike bets, said Samuel Tse, an economist at DBS Bank Ltd. in Hong Kong.