Flash mob looting is now a ‘thing’ in major US cities. First it was San Francisco Louis Vuitton, Burberry and Yves Saint Laurent stores. Then it was a Walnut Creek Nordstrom – followed by a Canoga Park Nordstrom in Southern California. 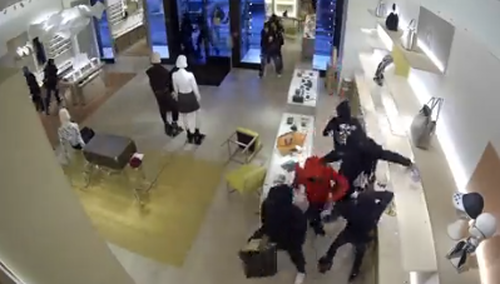 According to former Philadelphia police commissioner Charles Ramsey, large groups of people storming high-end retail stores is ‘here to stay’ and is going to get worse.

“This is something now that I really unfortunately think is going to spread,” Ramsay told CNN in a Thursday interview, adding: “Right now it’s in California, but it will spread, there’s no question about it.”

The former official said he saw a similar pattern in Philadelphia a few years ago when groups of up to 20 teenagers and young adults would run into department stores and grab as many items as the could. For reference, a group of around 80 people ransacked the Walnut Creek Nordstrom.

“It was really, really difficult to get a handle on it,” said Ramsay. “What we found was, one, it was being organized through social media. So one of the things we started doing is paying close attention to social media.”

Ramsay pointed to lax punishment as one cause – saying it’s “very, very minamal,” and “In most cases, it’s a misdemeanor. Some [district attorneys] flat out said they will no longer prosecute shoplifting.”

“This is not shoplifting, this is something far worse than shoplifting.“