Authored by Rick Moran via PJMedia.com,

In the Biden administration, “follow the science” takes second place to “follow the campaign donations from teachers unions”… 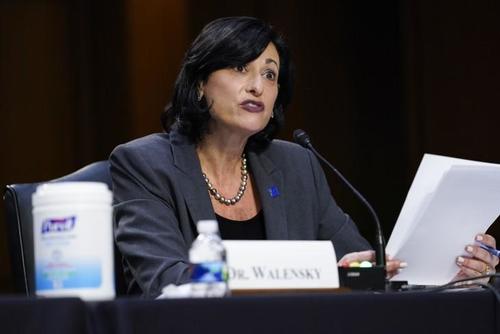 The Centers for Disease Control (CDC) was heavily lobbied by the nation’s second-largest teachers union on when to reopen America’s schools, emails obtained by the New York Post show. There was extensive communication between the American Federation of Teachers, the CDC, and the White House in the lead up to the release of school reopening guidelines in February.

The documents were obtained through a Freedom of Information Act request by the group Americans for Public Trust and provided to The Post.

Anyone in the United States, any group, has a perfect right to lobby any federal agency they wish. But don’t you think it would have been nice to know that the CDC was being influenced by teachers in coming to the conclusion that schools should remain closed to in-person learning?

The documents show a flurry of activity between CDC Director Dr. Rochelle Walensky, her top advisors and union officials — with Biden brass being looped in at the White House — in the days before the highly-anticipated Feb. 12 announcement on school-reopening guidelines.

“Thank you again for Friday’s rich discussion about forthcoming CDC guidance and for your openness to the suggestions made by our president, Randi Weingarten, and the AFT,” wrote AFT senior director for health issues Kelly Trautner in a Feb 1 email — which described the union as the CDC’s “thought partner.”

You can’t really say the teachers union was driving the discussion on when to open schools. Or can you?

“We were able to review a copy of the draft guidance document over the weekend and were able to provide some initial feedback to several staff this morning about possible ways to strengthen the document,” Trautner continued. “… We believe our experiences on the ground can inform and enrich thinking around what is practicable and prudent in future guidance documents.”

Emails show a call between Walensky and Weingarten — the former boss of New York City’s United Federation of Teachers — was arranged for Feb 7.

The lobbying paid off.

In at least two instances, language “suggestions” offered by the union were adopted nearly verbatim into the final text of the CDC document.

And in case anyone is confused about whose interests the teachers union was looking out for, they made it plain when pushing for “special remote work concessions” from the CDC.

The AFT also demanded special remote work concessions for teachers “who have documented high-risk conditions or who are at increased risk for … COVID-19,” and that similar arrangements should extend to “staff who have a household member” with similar risks. A lengthy provision for that made it into the text of the final guidance.

There was apparently some pushback from people who wondered why CDC was ignoring the science and giving in to teachers’ demands when there was plenty of evidence that schools were not a primary source of infections as long as they followed common-sense rules.

I know folks have a lot of questions about COVID-19 mutations, our vaccination progress, and much more. @CDCDirector Dr. Walensky sat down to provide answers. pic.twitter.com/K0Rlkc4Ti2

The answer is plain and simple: politics.

Dr. Monica Gandhi, a professor of medicine at the University of California, San Francisco who has written extensively on coronavirus, called the CDC-AFT emails “very, very troubling,”

“What seems strange to me here is there would be this very intimate back and forth including phone calls where this political group gets to help formulate scientific guidance for our major public health organization in the United State,” Gandhi told The Post. “This is not how science-based guidelines should work or be put together.”

This should be a major scandal. Outside of The Post and Fox News, however, no other major news outlet has bothered to report that government policy that should have been based on science, was in fact, based on recommendations from a bunch of political hacks.

*  *  *
ZH: Randi Weingarten has already tweeted her response to these ‘facts’ being exposed by FOIA-obtained emails… by gaslighting as aggressively as we’ve ever seen…

We wanted kids in school.. I have been arguing for that since April 2020..

What a disgraceful, horrific lie…befitting the historical embarrassment of your conduct and your union’s conduct over the past year.

It’s inappropriate to copy and paste verbatim ‘guidance’ from a political organization; rather than CDC using science and their own methods to form guidance. It’s clear the AFT was leveraging their power to keep kids out of school, regardless of science.

Let’s be honest, no one believes that you or UFT have been trying to open schools since April 2020. No one.

There was always a huge “,BUT” after that support followed by a laundry list of stupid, unscientific demands from you and other union leadership.

You’re trying to rewrite history so that you’re not the villian.
Good job @nypost