Screenshots of a virtual meeting, which have gone viral, show a Canadian politician urinating on camera during a work meeting.

William Amos, a Liberal MP for Pontiac, Quebec, released a statement Thursday about the incident:

Last night, while attending House of Commons proceedings virtually, in a non-public setting, I urinated without realizing I was on camera. I am deeply embarrassed by my actions and the distress they may have caused anybody who witnessed them.

While accidental and not visible to the public, this was completely unacceptable, and I apologize unreservedly. I will be stepping aside temporarily from my role as Parliamentary Secretary and from my committee duties so that I can seek assistance.

I will continue to represent my constituents and I’m grateful to be their voice in Parliament. I am deeply appreciative for the support of my staff and the love of my family. 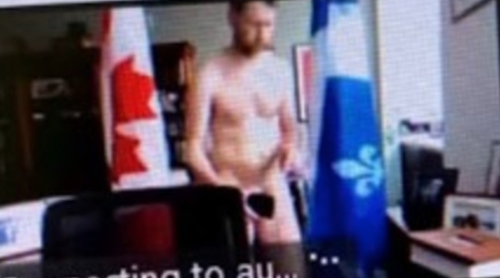 This is not the first time Amos, 46, was captured in the nude during a virtual meeting. In April, he was accidentally caught on video changing into work clothes after a workout.

“Obviously, it was an honest mistake, and it won’t happen again,” Amos said at the time.

“You’re either laughing at someone who’s having the worst experience of their life or you’re laughing at people who were subjected to nudity without their consent at work. I just can’t find an angle where that would be funny to me,” Ottawa-based sexual violence prevention instructor Julie Lalonde told Vice at the time.

“This is the second time Mr. Amos has been caught exposing himself to his colleagues in the House, and the House of Commons, virtual or otherwise, must be free of this type of unacceptable behavior,” Vecchio said.

From professional meetings to online classes to online educational classrooms, virtual conference calls have had their fair share of embarrassing episodes for people who didn’t understand how to turn off the session.