For the 19th Consecutive Week, Marko Kolanovic Says To Buy The Dip

What do you do when you have dug yourself so deep in a hole with your “BTFD” recos you have about as much chance of crawling out as Melvin Capital has of hittin gits high water mark? Why, you keep digging of course.

We are talking about JPMorgan’s chief quant and permabullish market preacher, whose relentless recos to buy no matter what we discussed back in March in “After Urging To Buy The Dip Every Week In 2022, Kolanovic Tells Clients To Buy The Dip… And He Means It This Time“, and again last month in “Is It Time To Turn Bullish On Stocks?”, when we said that “before bulls give themselves the all clear, a big red flag is that just one week after JPM’s resident permabullish cheerleader, Marko Kolanovic said to buy everything… which should be the clearest signal that one should take chips off the table and go short.”  (As a reference, the S&P was trading at 4,450 that day)

In retrospect, our perpetually cynical view was once again correct, because since then the S&P has plunged more than 10%, and closed below 4,000 today even as Marko kept repeating to just buy the dip, buy the dip….

Alas, being wrong every week since the start of the year has not been sufficient to get Marko to change his tune, and today the JPMorgan quant, who once upon a time (long ago) was known as Gandalf for magically moving markets with a mere whisper but has since become a bigger fade than Gartman, once again dug in his heels and for the 19th week of 2022 (here we exclude just the week of April 11 when Marko said to take “some” profits, although it wasn’t exactly clear which of his calls in 2022 has been profitable since stocks have never risen above the early Jan highs), urged JPM clients (at least those who still listen to him) to bet what little money they have left that this time stocks will finally bounce.

“The past week’s selloff appears overdone, and driven to a large extent by technical flows, fear, and poor market liquidity, rather than fundamental developments,” Kolanovic wrote in his weekly Global Asset Allocation note. “While we expect growth to soften, we continue to push back on a base case assumption that the global economy is headed for recession, an outcome that is increasingly being priced by markets.”

“We see supports for our pro-risk stance from COVID reopening, policy easing in China, strong labor markets, light positioning, distraught investor sentiment, and healthy consumer and corporate balance sheets” he added. Too bad nobody believes him any more. In fact, it’s so bad that even Bloomberg’s traditionally fawning writers took a swipe at the media-friendly strategist:

Marko Kolanovic’s repeated dip-buying calls are failing to play out so far this year, but he’s sticking to his bullish stance on risk and urging investors to increase holdings in beaten-up corporate bonds.

Kolanovic, voted the No. 1 equity-linked strategist in last year’s Institutional Investor survey, has been a steadfast bull in risky assets despite this year’s turmoil. Over the last two weeks, when the equity rout worsened, he forecast the stock market was poised for a rebound, partly because pessimism had gone too far. That prediction has yet to materialize, with the S&P 500 falling more than 3% Monday after five straight weeks of declines.

And yes, we would share more from his latest note but we won’t since it all the same old stuff: too much bearishness, everything is great, no recession, tightening fears overblown, etc, etc.

Of course at one point Marko will be right – that point will be when even the Fed realizes it has pushed stocks too low, too fast, and panics, sparking a historic short squeeze rally. Until then, however, those who follow the advice of Marko, or is that mARKKo, better have the same infinite balance sheet as his employer or else they’ll end up with that Cathie Wood.

Finally, for those curious for a quick walk down memory lane, here is an annotated history of the 2022 bear market overlaid with Marko’s weekly recommendations to buy each and every dip. 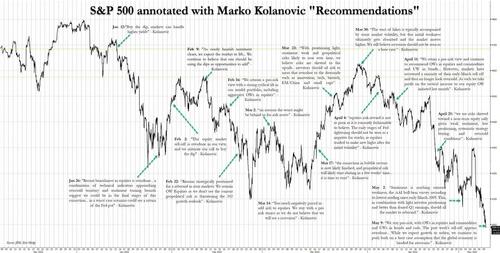