Paging Lloyd Blankfein (wherever he is)…the relatively junior Goldman Banker Roger Ng, formerly the head of Goldman’s investment banking business in Malaysia, has been found guilty on all three counts following a weeks-long trial at a federal courthouse in Brooklyn.

He now faces up to 30 years in prison at his sentencing, Bloomberg reports.

Ng was found guilty after his former boss, Tim Leissner, struck a deal with prosecutors to turn states’ evidence. Despite a valiant effort by Ng’s defense team, which included exposing Leissner’s neck-deep complicity in the scheme, and his role as the mastermind of the 1MDB bond deals that netted Goldman hundreds of millions of dollars in fees, while seeding 1MDB with billions of dollars – money that was supposed to be used for public works, but was instead siphoned off by former PM Najib Razak and his inner circle (including mastermind Jho Low, who remains a fugitive from justice and is believed to be hiding in China). The money was ultimately used as a political slush fund to buy votes for Razak’s re-election, while Low also stole billions and used it to throw lavish parties, gift celebrities (including model Miranda Kerr) with fabulous jewelry, purchase luxury yachts and real-estate and finance the making of the Martin Scorsese film “The Wolf of Wall Street”. 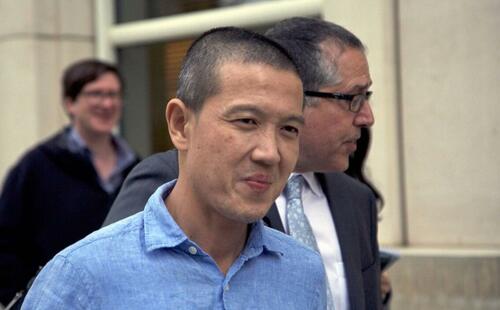 During the trial, Leissner (having already pleaded guilty to bribery and corruption charges) appeared as the prosecution’s star witness. He was accused by the defense of being a “double bigamist” (he was allegedly married to two different women at the same time, twice). And he was also exposed for posing as his ex-wife in emails sent to his new wife, Kimora Lee Simons (the ex of Russell Simmons, the founder of Def Jam) to convince her that they were no longer married.

A key element of the FBI’s case was a chart showing that Leissner sent $35 million of the $60 million plus in bribes the banker had received to a shell company controlled by Ng’s wife. The FBI said she later spent $300,000 on diamond jewelry and $20,000 on a gold hourglass. Ng’s wife testified at the trial that the money was actually  proceeds from an investment the couple had made in China, although she failed to produce paperwork to back up this claim.

Nearly two years ago, Goldman admitted that it had conspired to violate anti-bribery laws and its Malaysian unit pleaded guilty to criminal charges – amazingly, that marked the first-ever guilty plea for the firm, which was founded in 1869. The bank paid more than $2.9 billion in fines as a result, the largest penalty of its kind in US history. So far, it has paid more than $5 billion globally for its role in the scheme.

Back in Malaysia, the consequences of the scheme continue to play out. Former PM Razak is free pending appeal, but he has been convicted and could face 12 years in prison if he loses his appeal. Meanwhile, Malaysia’s finance minister said last month that the country is still $4 billion short of the money it needs to repay debts related to 1MDB.

While no senior Goldman executives were implicated in the scheme, Blankfein and former Goldman President Gary Cohn saw some of their bonus money clawed back by the bank (although Cohn successfully withheld some of his money from the claw back). Blankfein reportedly met directly with Low while Goldman was pursuing the deals, despite the multiple red flags raised by the bank’s compliance department, and Ng himself.

Unfortunately, the fact that he had raised concerns about the bond deal wasn’t enough to get him off the hook.